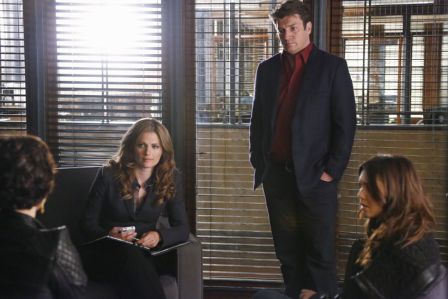 Do you have regrets about a decision you made in the past? If you had the opportunity for a “do-over,” would you change the path you traveled as a result of your bad decision? Well, that was the theme of this week’s episode of Castle—fixing bad choices.

While it was an interesting concept, the show was not exactly a smash hit. Of course, it followed a couple of really strong episodes, therefore, the bar was set pretty high. Unfortunately, this one never reached the level of those preceding it. Remember, though, my eyes are focused on the investigation of the criminal case and how Beckett and crew tackle it.

So let’s see if I’m totally barking up the wrong tree. Melanie usually sets me straight when it comes to the “other” aspects of the show—the romance and all things “mushy.”

Unfortunately, I didn’t enjoy this episode of Castle as much as I did the last two. The show was case heavy, with a Miley Cyrus vs. the paparazzi-like plotline, and I found it to be dull and not “Becket-flavored” enough to hold my interest. Two personal plot points woven in did grab my attention, however. I only wish the show had focused more on them than on the lame case.

Point number one:  Kate put her and Rick’s engagement announcement in the paper after stories on page six suggested he was getting back together with Gina, ex-wife number two. This surprised me. Kate is a very private person, and she’s resisted stepping into the limelight ever since Rick first set foot in the precinct. Yay for her! This cements her commitment to their marriage, proving to Rick once and for all that she’s ready. His publicity person probably wasn’t too thrilled, but who cares? Their engagement is up front on page six.

Point number two: Alexis kicked Pi to the curb. At least, we were led to believe that was the case. We didn’t get to see it on screen, and that irked me. Why the writer and director chose to focus on the case is beyond me. I would much rather have watched Alexis telling Pi to take a hike than to have listened to that quasi-celebrity whine about her screwed up life.

What about you? Did you like this episode? All of them can’t be stellar, of course, but hopefully they’ll give us more classic Castle during February sweeps. I haven’t heard much about any of the upcoming shows. Guess we’ll just have to wait and see.

I’ll begin by saying this was one of the goofiest cases ever. It made no sense whatsoever. Of course, I was onto the killer (Mommy Dearest) the moment she appeared on screen. Actually, my wife and I gave each other “the look” the moment we saw her.

And, as if learning the ID of the killer so early in the show wasn’t bad enough (you know what’s coming), Lanie apparently took a ride in a time machine, regressing back to her Ouija Board/crystal ball/root doctor/Magic 8 Ball days.

Her most glaring faux pas was estimating the victim’s time of death based on lividity. Obviously, Lanie didn’t read last week’s review because I went into pretty vivid detail about lividity (livor mortis). All she had to do was read a couple of paragraphs and she could’ve delivered something that made some sort of sense. However, she and the writers whipped out the old fortune-telling board and its magical pointer, combined with a quick shake of the old 8 Ball.

“Okay, fellow writers, do we go for realism this week? Or should we make our medical examiner character appear as dumb as we possibly can? Hey, I know, let’s give the old 8-ball a go at it”

The head writer gives the ball a good shaking and then says, “Oh, Magic 8 ball, should we continue on the path of realism that was so refreshing and added a nice, new dimension to the show? Or, should we go for Three-Stooges-silly?”

I think we know which triangle appeared in the black ball’s magic window—Yes, definitely go for stupid.

Okay, here’s the thing. If you read last week’s review you may remember the discussion about lividity, and what it is and what makes it happen. Here’s a replay.

When the heart stops beating, gravity pulls blood to the lowest point in the body. Blood pooling in those low areas stains the surrounding tissue, giving an appearance that looks somewhat like bruising. This purplish staining of tissue is called livor mortis, or lividity. For example, a victim lying flat on his back at the time of death exhibits lividity on his back, buttocks, and the back of his legs. The same is true on the front of the body, if the victim is found lying face down.

Are you with me so far? Lividity is the purplish staining of tissue caused by gravity drawing blood to the lowest points of the body.

The murder victim this week was found in an alley, lying face down in a pool of blood. She’d been killed by a blow to the head, which, by the way, was inflicted by Mommy Dearest (more on this in a minute).

Remember, lividity can be seen on the flesh at the lowest points of the body.

Here’s a picture of the victim as she was when Lanie made her voodoo prediction. Now, pretend you’re a detective for a moment, and then tell us in the comments section below why Lanie could not have used lividty to determine a time of death. 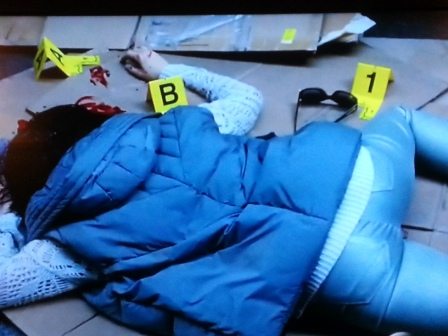 I look forward to reading your comments.

The blow to the head that killed the victim was delivered by Mandy Sutton’s mom. I know most of you are writers who do your homework/research when it comes to murder, so I ask you this… How often (in real life) do women kill using some sort of blunt object? Now, let’s ask the cops a similar question. How many cases have you worked where a woman killed someone by hitting them in the head?

You know, I’ve been in a couple of life or death situations where I finally had to resort to giving my attacker(s) an aluminum shampoo (a hit to the head with my heavy, metal flashlight—the one that holds four D-cell batteries).

I’m not talking about a gentle “love tap.” In one particular instance I was fighting for survival, so I’m talking a blow hard enough to send a baseball over the Green Monster at Fenway Park. The kind of hit that starts a geyser of blood. At that point it was either him, or me. I chose ME. And you know what happened? It made the guy really mad and then he started hitting and choking and biting me harder than before.

Then there was the time when a suspect hit me in the head with a 2×4 to prevent me from arresting and handcuffing his buddy. The blow was so hard I actually saw the “white light and stars” you hear people speaking of. Did it kill me? Obviously not.

Anyway, the point of that little tale is to let you know that blows to the head normally do not kill someone. In fact, they rarely cause unconsciousness. Of course, both have occurred, so it’s not impossible, just not probable.

Back to Mommy Dearest, , I mean Sutton. Bashing someone’s brains out is an unusual crime for a woman to commit. Normally, women prefer to keep their distance when taking a life—poisoning, murder for hire, and even shooting.

To do the damage we saw to Mandy Sutton’s double, Ms. Sutton would have needed to really jackhammer the young woman’s noggin. Otherwise, the victim would have suffered a nasty headache, but surviving to sue the pants off her attacker. And that’s after turning around and beating the woman six times west of Sunday for hitting her.

So please do use good judgement when writing those “blow-to-the-head-with-a-book murder mysteries.

Okay, that’s enough for this week. Sure, there were other things that deserved a mention—good and bad—but I’ve rambled far too long already, so we’ll see you again next we— Wait! I almost forgot to mention Pi and the possibility of him getting the boot from the show. I almost did a happy dance around my living room last night when it appeared that Alexis is considering kicking the aggravating guy to the curb. The show will definitely be better without him.

Okay, we’ll see you next week.

Those of you planning to attend the 2014 Writers’ Police Academy should watch carefully for an announcement regarding registration. There are only a few days left in January and registration IS opening this month. If you haven’t already done so, please visit the WPA website to sign up to receive updates and news. The link is at the bottom right of the main page.

Also, the 2014 WPA schedule of events will most likely be posted later today or in the morning.

Updates to the website are underway, complete with sponsor listings and more.

The WPA is in dire need of sponsors. This year is the most expensive ever. Believe me, every little bit helps! So please do consider joining your fellow writers as a 2014 WPA sponsor. You can contact me for details, or you can click the Become A Sponsor link at the top of the WPA website home page.

Also, we are currently seeking items for the annual silent auction and raffle. If you’d like to send something please contact me at lofland32@msn.com

As always, I thank you for supporting the WPA and all of our dedicated instructors.

A Preview of the 2014 WPA Workshops
Scroll to top