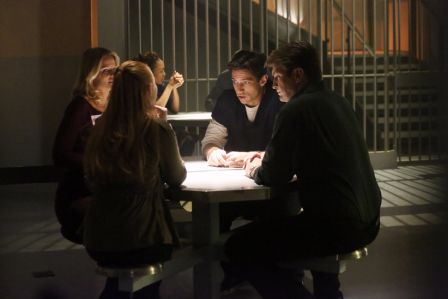 Nothing quite says “Family Road Trip!” like a father and daughter excursion to death row. Why not? The ambiance is exquisite, and the food and accommodations are, well, to die for.

Okay, I know, that was a weak and corny lead-in, but it does tie in with what we saw last night—the somewhat weak and corny depiction of prison, condemned inmates, and death row. More on that in a minute. For now, Melanie’s on her way to the soapbox and she has a smile on her face, which, I think, means she enjoyed last night’s episode. Let’s see what she has to say.

After last week’s so-so episode that put Rick and Alexis at odds, this one brought me immense relief in the end. I was a bit puzzled by Alexis’ intense involvement in a case to prove a death row inmate’s innocence and the ease by which she and Rick got their hands on evidence — how they were able to carry the files with them to Pennsylvania, for instance — and how the NYPD was able to help despite being a different jurisdiction (especially how they had the box of evidence at the end), but sometimes on Castle that kind of impossibility is par for the course. The writers use a vast amount of literary license and pay absolutely no attention to correct police procedure. And yes, as usual, it bothered the heck out of me… but I’ll let Lee tackle the craziness that was evidence handling in this case.

I enjoyed the opening scene between Rick and Kate immensely. Rick’s suggestion that they marry in space cracked me up because it fit so well with his character, and I loved Kate’s snarky response. So funny. Seeing her already pushing him to check out wedding venues made me smile, too. I love that she’s so excited about marrying him, even though they won’t be tying the knot in a space capsule many miles above the earth.

Rick’s excitement upon reconnecting with Alexis, albeit warily, on the trip to Pennsylvania made me happy as well. I loved their give and take along the way, especially their amazing theory building. Rick’s line about usually only theorizing so effectively with Kate and Alexis’ response of “Ew” made me laugh out loud. I’m glad father and daughter finally reconnected without Pi in the mix. The show is so much more fun without him.

The last scene where Alexis thanked Kate (apparently, since we couldn’t hear their dialogue) and their subsequent hug made enduring the sketchy evidence handling worth it. They’ll soon be family, and they need to bond. Now if Rick, Kate, and Alexis can only keep it together when Pi reappears. I’m hoping he’ll soon be history, but so far he and Alexis are still living together, so more trouble might be lurking on the horizon. I hope not, however. I’ve about had enough of pouting Alexis. Seeing her fight for justice for the accused in tonight’s show, as unlikely as they might be in real life, made her seem much more grown up, even if the wonky writing allowed her to do the impossible.

All in all, I enjoyed the episode, even though I pegged the real murderer the minute he acted like a jerk in the restaurant. Why do those guys always stick out like sore thumbs?

I’m hoping the bad buys in next week’s episode will be harder to identify. The clown masks in the promo really creeped me out. We’ll have to see if the writers do any better with the procedure in that one. I certainly hope so.

Well, where should I begin? Hmm… How about I start with wondering how long Alexis has been working with the Innocence Review? Have we heard of this before? If so, I missed it. Probably during one of the earlier brain-freezing episodes where Lanie predicted a cause of death by performing a Voodoo dance around a steaming cauldron of chicken blood, sheep innards, fresh fire ant torsos, and crushed owl bones. Wait…I think I have my shows mixed up. I believe that concoction was a dish that Bizarre Foods’ guru, Andrew Zimmern, tried while on one of his own excursions to some faraway village in either Lutefiskia or YakPenistan. Sorry for the mix-up, Lanie.

A few things I’d like to point out regarding death row. First, state and federal prisons normally pay their electric bills on time. Therefore, there’ll be no shortage of light sources. In fact, those places are lit up like a high school football field on Friday night…times ten. Yes, I know, the dimly lit death row visiting room where Castle and Alexis so freely entered, unescorted, was designed to add an air of CSI-esque mystery and suspense. However, prison officials generally like to see what’s going on during visitation, especially when a death row inmate, a man with nothing to lose and everything to gain, is seated at a table with his girlfriend and two people who have their sights set on getting the guy out. So…LIGHTS ON! 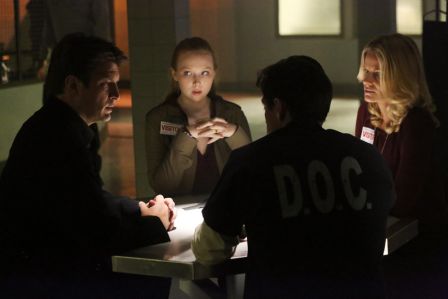 Still, the lack of light did nothing to hide the perfectly-cut and styled hair of death row inmate Frank Henson. And, his pearly-white teeth glowed nicely in the little light that was available. Let’s not forget about Mr. Henson’s healthy, glowing skin tone. Inmates on death row rarely see sunshine, so they normally have a pale and sickly appearance that’s often referred to as “prison pallor.” 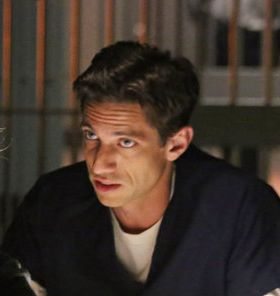 Have you ever seen the hairstyles worn by prison inmates—the one’s who’ve been locked up for a long time with no access to a real barber or stylist? Well, the haircuts generally aren’t very flattering. In fact, there are three basic styles of jailhouse “do’s.”

1. The “I’m not cutting it until I cut a record with either The Beatles or The Beach Boys, or when I’ve been denied parole for the 100th time.” 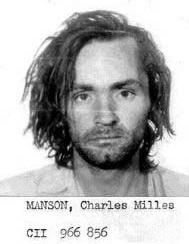 2. Style number two is the “My wife finally divorced me and I trusted my haircut to my cellie and a sharpened top cut from a gallon can of green peas.”

3. Finally, we have the “Scott Peterson,” a nice little do made possible by a guy named Brutus who owns the only battery-powered beard and mustache trimmer on death row. And, as always, there’s only one height adjustment that works. 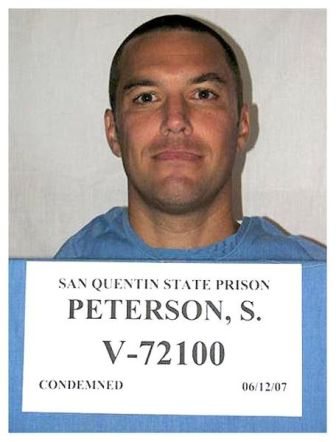 Okay, Melanie already pointed out that the NYPD does not have jurisdiction in Pennsylvania, and that it’s ridiculous that Castle had official case files in his possession and transported them to and from wherever the heck he wanted to. And, the killer de jure—the cop—stuck out like the sore thumb that’s the norm for this show (easy to spot murderers). So I won’t revisit either of those goofy scenarios. What I will say is this…NO PI! And that’s a good thing.

– I’m curious, what do you think of Alexis these days? Spoiled and precocious? Irritating and not so precocious? Spoiled and immature? Irritating? Or…? One other thing…I think I know the reason for Alexis’ sudden attraction to a goofball like Pi. In fact, I’m almost certain it’s because she’s damaged a fair amount of brain cells by pulling her hair back so tightly. What was up with that hairstyle? Even Charles Manson wears a better “do.”

*By the way, in case you’ve ever wondered what it would be like to be sentenced to death row for a crime you didn’t commit, well, here’s a link to a Graveyard Shift article written by Ray Krone. Ray served ten years on death row before new evidence proved his innocence. Ray’s story, among others, is incredible…and incredibly sad. Even with a happy ending there’s no way Ray will ever get back the ten years he lost to a broken system.