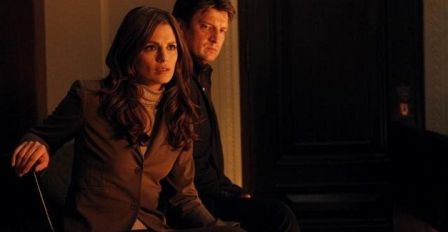 Heart wrenching pain. Betrayal. Forgiveness. Second Chances. Love… So much emotion packed into one fantastic episode. So much so, I don’t even know where to begin. With Rick’s desperate attempts to protect Kate? Roy’s betrayal, or Kate’s forgiveness? I’m simply stunned.

The parts that took my breath away:

• Rick’s deep concern for Kate when she falls back down the rabbit hole of her mom’s case.

• Kate throws herself on top of Rick to protect him when Lockwood’s accomplices throw the flash bangs in the courtroom.

• Jim Beckett goes to see Rick to find out who’s after Kate and asks him to talk her down. Fabulous scene.

• Rick confronts Kate in her apartment, mentions the kiss and the freezer. Emotionally charged incidents they never talked about. He asks her to walk away, to drop the case and stand down. And Kate refuses. She pushes him away again… even though she really doesn’t want him to go. She’s so caught up in the case, so focused, she won’t let anyone stop her crusade to find justice for her mother. Not even Rick.

• Rick’s heart-to-heart talk about his fear for Kate with his mother Martha. He’s a wordsmith, a writer, and he can’t get the words out to say that he loves Kate. But Martha knows. She tells him, “Don’t waste another minute of it.” That scene brought tears to my eyes. I absolutely couldn’t breathe — even when I watched it twice more.

• Kate goes to Captain Montgomery to ask him to kick Rick out of the precinct — and Roy agrees! She’s flummoxed. She really doesn’t want Rick to go… a fact made obvious by the look on her face and her bumbling attempt to question him about it. The thought of working without Rick by her side is a daunting prospect, but she’s so used to pushing people away she doesn’t know how to accept help. Or true love. 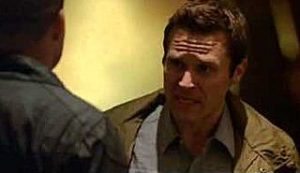 • Ryan and Esposito discover the identity of the third cop: Roy Montgomery, their captain. The ultimate betrayal. They’re so stunned, they come to blows over it… and must forgive each other in order to go on.

• Roy’s act of love at the hanger to protect Kate. He has Castle meet him there and orders him to take Kate away before shots ring out. Before Roy gives his life to save her.

• Rick hauls Kate bodily out of the hanger and holding her while she wails. They both know Roy is going to die, and they are powerless to stop it. So heart wrenching.

• Kate’s decision to keep Roy’s betrayal a secret. Only she, Esposito, Ryan, and Castle know the truth. Her eulogy for Roy makes him out a hero, so his family will never know what really happened… so touching. 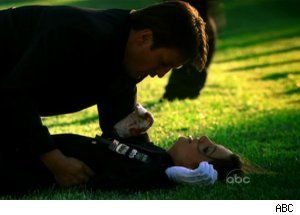 • Rick’s attempt to save Kate at the cemetery. He’s good, but he’s not fast enough to stop a bullet. He begs her to stay with him, then finally says those three precious words: “I love you. I love you!”

Is he too late? I think not… but we won’t know for sure until the first episode of season four. From what I’ve been able to gather from Twitter, that one will pick up where this one leaves off. My question is: Was Kate wearing a vest? Hmmm… 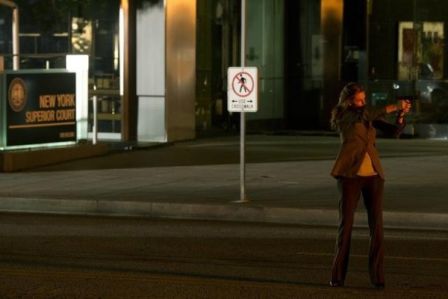 Okay, enough of the mushy stuff. Lets get to the cop stuff.

But, before I do, I feel as if I have to say this…again. We write this part of the review (about the police procedure) merely to point out things that aren’t exactly correct so writers (and others) won’t make the mistake of thinking that’s how things are in real-life. Again, I know the show is fiction. I know it’s not supposed to be realistic. And I know you love the characters. But YOU (writers) asked me to do this! So please, no emails telling me how dumb I am for not realizing this show is fiction and that it’s not a police procedural. I know this. And yes, I like the show. Especially this episode. I must say this was one of the best yet. Maybe it was so good because Lanie only had two lines to deliver, and they were believable. Amazing! 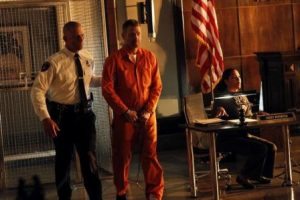 – Beckett goes to the prison (a state prison not under the control of NYPD) and totally takes control of an emergency response team who’s mission is to raid Lockwood’s cell. She even gives the team the command to GO! Ridiculous. Those teams practice together as a team on a very regular basis. Each person has a specific duty and they operate as a unit. They would not allow an outsider to join them, especially as their leader. Besides, she has no authority inside a prison.

A bit of explanation regarding the prison part of the episode:

Ad Seg, where Lockwood was housed, is Administrative Segregation. That’s where they keep inmates who either need protection or they pose a threat to others. There are a few other reason prisoners are housed in ad seg, but these two are the major ones.

General Population – Where the majority of prisoners are housed and are allowed to mingle with other prisoners.

Collect Calls from prisoners – I believe it was Ryan who said Lockwood was making collect calls to a number that wouldn’t accept the calls. Most prisons require prisoners to submit a list of names—a phone list—and numbers of the people they’ll be calling during their incarceration. Authorities check the numbers to make sure they don’t belong to co-conspirators or victims, police officers, judges, etc., and those are the only numbers the inmates are allowed to call. The system does not allow random calls or calls to unapproved numbers. The calls are also monitored (randomly, or if officials have reason to monitor a specific inmate).

– Ryan and Esposito hand Castle a beer they’d been keeping cold in the evidence room refrigerator. Castle grimaces at the thought of what else is kept there, on ice. Sure, it happens. I’ve seen it in morgues as well – a six pack of Diet Coke sitting next to John Doe’s body. Or a box of warm doughnuts beside a brain bucket in the autopsy room. – There was a bit of a problem with how things progressed when Montgomery “took the bullet” for Beckett. As tough as she is and she simply stood by while her captain was murdered? No way. And, this whole thing was so out of character for Montgomery. But, when you’ve got to get out of your contract, you take a bullet, right?

As for Beckett getting shot…you bet she had on a vest (remember, they were gunning for her). And you can take it to the bank that she conveniently won’t remember Castle’s words. 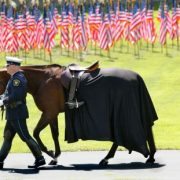 Montgomery’s funeral was nicely done, including the riderless horse. I remember the days of working plainclothes for years and years and then trying to squeeze into the old uniform for a special occasion. Well, let’s just say that Beckett and crew seemed to fit into theirs a little better than I did. I’m just saying… This season of Castle is over, but we can always have a Castle chat session at the Writers’ Police Academy. Melanie and I will both be there. Will you?