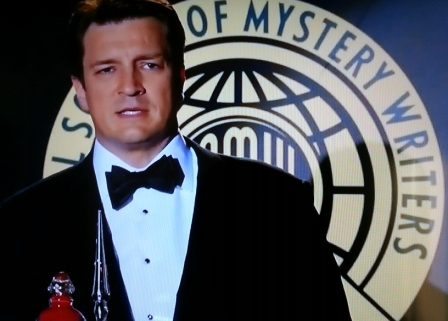 Richard Castle stumbled over his first murder victim in a wooded area outside of New York City when he was only eleven years old. He froze when he saw the woman covered in blood with crosses cut into her face, long enough to come face to face with her killer. The murderer made him promise to never say a word about what he’d seen that day in Hollander’s Woods… a promise he kept for over thirty years. He became a mystery writer because of it, using words and twisted plots to cope with the trauma the serial killer had inflicted upon his young mind.

Jump to present day, when another blood-covered woman with the same crosses etched into her skin is hit by a semi near those same woods. Local authorities contact NYPD in hopes of learning the woman’s identity, and Rick accompanies Kate to the scene. Seemed a bit far-fetched that Kate would be the one to get the call, but I bought it because it brought Rick back full circle to where his love of the macabre first began.

IMHO, this episode written by the show’s creators, Andrew Marlowe and Terri Edda Miller, flowed well and kept my attention. I had a little problem with the “performance review”-turned plea for Kate to run for the state senate, but otherwise loved this one. Parts of it seemed more like a full-length feature than a TV show… and they got the basics right. Esposito used the acronym BOLO instead of APB, and Lanie came off as much more believable than normal.

The chilling case creeped me out, as did the doctor who turned out to be the serial killer. And the barn scene, where Rick confronted this man who had threatened him so many years before, really rocked. Such great props and so much fabulous, heart-pounding suspense. The impact of Rick’s wedding-ring-clad hand sliding beneath the barn door in silent plea for Kate to give him her gun, which she did readily, hit me hard. Loved the scene where he shot the killer.

The story of Rick being given the Poe’s Pen Career Achievement Award framed the entire episode. I adored all scenes connected with this part of the plot, from the huge head shots of Rick and the fun family banter at the beginning, to the delicious award ceremony at the end, complete with Rick’s wonderful acceptance speech and tables filled with the entire cast, the writers, and many folks who usually lurk behind the camera. Such a fitting tribute to this fine show. MilMar (Andrew Marlowe and Terri Edda Miller) didn’t know when they wrote/filmed it if Castle would be renewed, so they shaped the episode to go either way. I believe it would’ve been a wonderful series finale if that fear had come to fruition. Luckily for us loyal fans, it did not.

Bring on season eight! Just please let Kate turn down the offer to run for the state senate. Castle is a police procedural, not a legal thriller.

Well, this was another incident where Beckett and crew work a case that’s totally outside their jurisdiction. What, the 1,000 investigators within the New York State Police Bureau of Criminal Investigation (BCI)) don’t have what it takes to solve their own crimes? Typically, it’s the NYSP who assists local jurisdictions with their cases, not the other way around.

I guess New York City is such a crime-free place that they can easily spare three homicide detectives to investigate a hit and run/possible assault (remember, the killer du jour didn’t kill the woman, the truck did) that didn’t occur within their boundaries. And they can dedicate tons of resources—cars, super-spy Tory, etc., to an area nowhere near their jurisdictional limits. Anyway, on to other aspects of the police procedure…

Melanie already mentioned Esposito’s correct reference to the acronym BOLO (Be On The Lookout), and she’s right. I just wish the show would stick with it instead of flip-flopping back and forth between it and the outdated and no longer used APB (All Points Bulletin).

Lanie was once again a believable character. As Sheriff Andy Griffith would say, she came across as having a world of “smarts.” I’ll even give her a pass about pinpointing the TOD (time of death) of Mrs. Lewis at three years prior to the discovery of her body. Lanie based her finding on a mere look at the corpse while still at the scene of her death. M.E. Lanie has a remarkable psychic ability to…well, you know…(that voodoo stuff).

I particularly liked the scene where wacko Noah Lewis fired a shotgun blast at Detective B and crew and then took off running. The foot chase and the way the actors handled it was fairly believable. Actually, that’s one scene to which I can definitely relate. As the saying goes, “been there, done that.” Esposito and Ryan (the actors who portray them) do a great job in those situations.

The creepy doctor-killer was, of course, easy to identify. But I believe this time it was an intended part of the story, which was extremely refreshing. I wish they’d do more of it instead of parading the predictable three red herrings in front of our TV screens every single week, week after week after week. Yes, this was a nice touch. It all happened a bit fast, but the entire story had to start and finish within an hour, so fast it had to be.

Writers, this next point is especially for you because I’ve seen it written incorrectly numerous times. Police cannot send a private citizen inside a place to conduct a search, bypassing the warrant, hoping to find evidence of a crime. In the event of the latter, that citizen is acting as an agent of the police and the search is a violation of search and seizure law. Therefore, Castle, a person who’s a definite agent of the police, entering the barn to snoop for evidence, conducted an illegal search, especially with Beckett driving him there and sitting outside listening on the phone to Castle’s play-by-play description of the search. This situation was no different than had Beckett gone inside without a warrant. Of course, Beckett didn’t have jurisdiction there anyway, making it a double whammy.

Castle shooting the guy, even though the search was illegal, was justified. Sure, there’d be a huge civil suit on the way because he was there illegally, but it wasn’t a criminal act. There was no criminal intent to kill. Doesn’t mean he wouldn’t be charged for it by an overzealous prosecutor with an ax to grind, or one who’s trying to make a name for himself, but a conviction by a truly fair and impartial judge or jury…nope.

Kate Beckett a senator? I absolutely hate the idea and that the writers stuck this oddball piece of crap storyline into the show. It doesn’t fit. It’s out of character. And it’s downright dumb. Someone must have seen another shark that needs jumpin’.

Still, I enjoyed this episode a bit more than usual, and I especially connected to the scene where Michael Connelly presented the award to Castle. After all, it was less than a year ago when I introduced keynote speaker Michael Connelly to the attendees of the 2014 Writers’ Police Academy. I also had the honor of presenting Michael with an award naming him as Honorary Sheriff of the 2014 WPA. 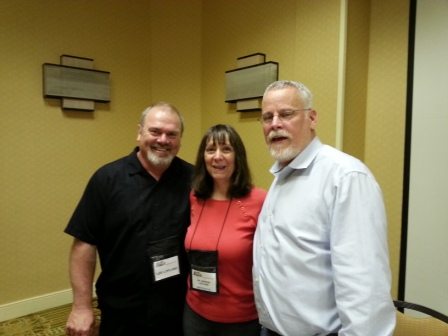 Me, Denene Lofland, and Michael Connelly at the 2014 Writers’ Police Academy

*By the way, we still have a few open spots at the 2015 Writers’ Police Academy. Our keynote speaker this year is Karin Slaughter.

Death of Person Shot By Cops Ruled a HOMICIDE!
Scroll to top