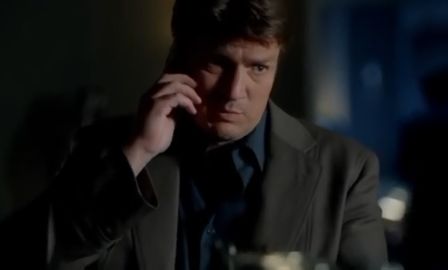 She lost her freakin’ gun AGAIN! And that’s all I’m saying for now. Take it away, Melanie, before I say something that’s not suitable for the young eyes and ears that often visit this site. I’ll be back. First, though, I’ve got to cool off. This gun-losing garbage has gone far beyond ridiculous…

Yes, the plot was far-fetched, but I still loved this episode of Castle. Kate’s frantic race to save Rick’s life had me on the edge of my seat, especially at the end. I love how much she loves him. Even faced with seemingly insurmountable odds, she fought for him, battling higher ups in the federal government — even the Secretary of Defense — without caring if she lost her job.

Rick was worried about Kate, too. His concern when he asked Rachel McCord, her partner, how she was doing in her new position, made my heart melt. McCord said Kate was doing fine and had a lot of potential, and he asked, “So she’ll be okay?” He wanted to make sure she’d be all right even if they didn’t find the antidote in time and he didn’t make it.

Martha’s and Alexis’ concern got to Kate as well. I know she wanted to tell them more, but she hung back because Rick told her not to say anything. Later, I think she didn’t tell them because of time constraints. She refused to let anything stop her from finding Parker and saving Rick.

Thank goodness they found the antidote in time. The last scene in the hospital room made me smile. The whole family, plus Pi, who is starting to get on my nerves, had Rick surrounded as he recovered from the toxin. Kate is part of that family now.

Even so, Kate and Rick are still struggling with her being in DC while he spends most of the time in New York. Kate gave voice to the problem, and Rick said, “Sometimes the hardest things in life are the things most worth doing. Just because we haven’t figured it out yet, doesn’t mean we won’t.” I believe they will make it… as long as Kate can learn to accept that everything, especially in that hotbed of politics, isn’t always black and white.

I’m not so sure she ever will. And truly, I hope she doesn’t, so she can return home to Rick and go back to the work for NYPD giving closure to families who need it. Go Kate!

Bring on next week’s episode. I can use a little light-hearted fun after this week’s race against time.

I’ll get to the “losing of the gun” BS in a moment. First, I’d like to ask if anyone else paid attention to Beckett’s demeanor throughout the entire episode? Didn’t you find it a bit bizarre that she totally lacked emotion, knowing that Castle had a mere hours left to live? Think about it. How would you react if doctors told you that, before sunrise, your significant other would cease to exist. You’d never, ever see them again. Dead. Gone. Ashes to ashes. Dust to dust. Castle no more.

Beckett never shed a tear. Not even a moist eyeball. And, to top it off, she continued to work on the case instead of spending what could’ve been her last 720 minutes, or so, with the love of her life.

I know. She’s supposed to be as tough as a handful of rusty nails. But even MMA fighters feel pain and show emotions from time to time.

– Is there any need for me to go into the foolishness of the agents having a lone computer nerd who has access to every single camera in D.C., and that he’s able to, within a snap of the fingers, locate one person out of the thousands who travel the sidewalks in our nation’s capital?

– Did anyone else immediately know that the Parker guy was going to be the villain of this two-part episode? If not, then you haven’t kept up with the “Castle Boiler Plate Script” formula, because Parker couldn’t have been any more obvious if he’d worn an “I Have The Deadly Gas” t-shirt. Same thing for the Secretary of Defense. It was soooo obvious that he wasn’t the bad guy. Well, he was a bad guy, all right. Just not the main bad guy in this show.

– Okay, so Beckett kicks in Parker’s front door, which is totally goofy, but it adds a bit of action and tension (aren’t we all supposed to add a little tension here and there in our writings?).

But I have a better scenario in mind. To save us all from the suspense of wondering at exactly which point in each episode will Beckett lose her weapon, why not have her kick in the door (with the appropriate amount of wood splinters flying throughout) and then toss in her pistol ahead of the entry team? Yep, a nice, big ‘ol heave-ho right to the middle of the room. Or, she could hide it in a city park frequented by bad guys, and each of the henchmen could enjoy an afternoon of frolicking and playing a cheerful game of “Find Beckett’s Gun.”

Puhleeze, Castle writers, we’ve had enough of the gun-losing-kidnapping scenes. At this point in the game, even losing her gun once per season is too much to bear.

– A deadly toxin has already killed one man and Castle is soon to be number two. Yet, when Beckett and “new crew” raid the apartment where the toxin is probably stored, they wear no protective gear. Not even a pair of gloves.

Well, as much as I hate it, we’re now at the actual point where Parker takes Beckett’s pistol. He points it at her and, like all silly TV bad guys, doesn’t shoot right away. First, he has to talk to her, which, as we all know, gives another good guy time to show up to save the day. In this case the other good guy was Beckett’s partner, Agent Somethingorother (I can’t seem to warm up to this character enough to remember her name).

Anyway, the agent sees the guy pointing a gun at Beckett (a use of deadly force situation if ever there was one), yet she chooses to say something to the killer instead of poking his brain with 5 or 6 rounds from her own pistol.

Honestly, this whole D.C./secret agent thing is just not working for me. The show has absolutely lost what made it so appealing in the early years. Sure, the Castle/Beckett relationship was inevitable. However, to reach so far to grab only what we’ve seen in the past two episodes is, well, let’s just say that the good is not outweighing the bad. And, obviously, something’s got to give soon to bring in Ryan, Esposito, and Lanie (groan).

You know, I sure miss the days when Castle was the bumbling tag-a-long author who shadowed Beckett and crew. I miss the poker games. And I definitely miss what this show was once centered around—a famous mystery writer who hung out with a NYPD detective as research for his novels. And the fun. I definitely miss the fun.

*By the way, I can’t stand the Pi character. He adds nothing to the show other than to have a character who’s even more irritating than both Gates and Lanie.

Predicting Crime: Science, Or Not?
Scroll to top