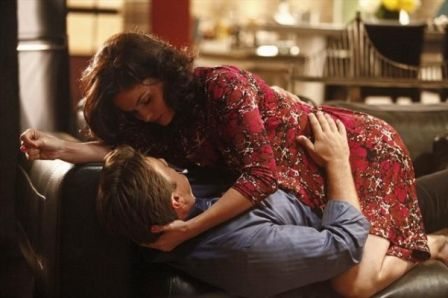 It was five years ago when TV viewers were treated to a fun new show about a mystery writer who tagged along with a police detective as research for his books. The show was funny, with bits of police work tossed in. Everyone loved it, and the program, Castle, quickly became one of the most talked-about TV shows on the air at the time. Then things went a bit askew. Castle somehow morphed into an after-school-special-like show, where the two stars, Castle and Beckett, focused on a junior high-ish “do you love me, check yes or no” type of relationship. For many viewers, the kid-like wannabe love affair was boring, and it was extremely frustrating to fans.

BUT…this season “fun Castle” is back. So far the episodes have returned to the original premise of funny with a little police work tossed in, albeit bad police work. But hokey police procedure and forensics is not what makes the show what it is, and that’s a great mix of core characters—Castle, Beckett, Ryan, and Esposito—who really know how to play off one another to deliver darn good entertainment.

And speaking of Castle and Beckett “playing,” here’s Melanie’s Good Cop take on this week’s episode.

Before I get into the meat of my blog, I have to mention that I know Lee had to be rolling his eyes the second Lanie appeared on screen. Why? She mentioned lividity when talking about time of death. I flagged that one, and I’m sure Lee caught more things wrong with her assessment of the body. Anyway, that’s not my job.

I’m supposed to talk about the romance, and we got plenty of that right up front tonight. I loved that Rick was at Kate’s while she was getting ready for work — and then we finally got the kiss we missed last week. Squee! Kate’s little “wow” as she pulled away didn’t hurt, either. Those two have it bad, and I couldn’t stop smiling.

Of course, Kate fears Captain Gate’s wrath if she learns they’re together, so they decide to hide their relationship from everyone at the precinct. I think that’s kind of silly, because as Rick pointed out, he doesn’t actually work there in any official capacity. Still, their subterfuge made for some funny scenes. Lanie almost outs them, but even with her voodoo logic she couldn’t unravel the mystery.

Kate and Rick conspire to both act as if they’re single whenever they’re out in public, and Rick takes that to heart and agrees to a date with a swarmy, bikini wearing entertainment reporter — much to Kate’s chagrin. She stays at the precinct to work when he goes on the date, but she’s jumpy and keeps checking her watch. Can you say jealous Beckett? Teehee! I love it.

Bikini woman turned out to be an octopus, with busy hands and an even busier mouth. She didn’t even give Rick a chance to meet her at the restaurant. Oh, no. She showed up at his door with oysters and chocolate covered strawberries and then jumped him before they could get the food out of the bag. Who knows what she might’ve done if  Rick hadn’t accidentally butt-dialed Kate when the reporter shoved him up against the refrigerator? That cracked me up, because I’m always butt-dialing people; it’s easy to do with an iPhone unless you lock it.

Luckily for Rick, Kate finally accepts his apology. Then the two of them agree to talk about dating other people — to act single in front of others — but promise to not actually do it. I don’t know about you, but that makes me happy. They’re obviously totally smitten with each other.

Except… Kate won’t kiss Rick right away, because she can’t get over the image of that woman’s boobs in his face. I don’t blame her! Too funny. I really enjoyed this episode. I love that they’ve brought the humor back, and I think they’re doing a great job with Kate and Rick’s relationship, too.

Can’t wait for the next episode!

I, too, enjoyed this week’s episode. And I’m certainly pleased to see Castle and Beckett together, in a relationship, instead of passing imaginary notes back and forth in the rear of a 6th grade classroom. So far, having the two of them together is working nicely, although, I do worry a bit about the writers putting too much focus on hiding their (Castle and Beckett) relationship. Doing so could become as tiresome as the “look, but don’t touch” song and dance we suffered through for the past few years. For now, though, it’s fun.

Okay, on to the reason I do my part of this review. And, for those of you who don’t know, this “review” started when real-life mystery writers asked me to point out the flaws in the police procedure and forensics in the show so they wouldn’t make the same mistakes in their writing. So…

First mistake…Lanie. However, her comment about lividity last night just might have been correct. Lividity, or Livor Mortis, is the pooling of blood in the lowest portions of the body. Lividity is caused by gravity, and begins immediately after death (as soon as the heart stops pumping) causing the familiar purplish discoloration of the skin. The process continues for approximately 6-12 hours, depending upon conditions, until it becomes fixed, permanently staining the tissue in the lowest parts of the body.

Therefore, if lividity was fixed when Lanie examined the body, then her statement could have meant that the victim had been dead for at least 6-12 hours. And, I believe that time-frame fit last night’s scenario. So this time Lanie’s reference to lividity could have been correct. Now, whether or not that was done on purpose…well, who knows?

However, let’s fast-forward to the scene in the morgue. Here, Lanie reverts back to her old unbelievable self. Yes, I realize the writers are using her to dump clues on us, but why don’t they do it in a manner that’s believable? For example, Lanie stated that she’d discovered makeup on the victim’s blouse, which was a good observation. But then she said the positioning of the makeup indicated that she was close to someone, like she was fighting. REALLY? FIGHTING??? Couldn’t the discovery of makeup on a blouse indicate that someone could have hugged the victim, therefore the transfer of makeup? In fact, there are several reasonable explanations for the makeup on the blouse. Then came the real “throw the remote at the TV moment,” when Lanie said the makeup was specifically formulated for high-def TV cameras. Again…REALLY? How on earth could she possibly know this? She’s a medical examiner, not a psychic chemist!

Then there was the blood spatter on the blouse, and I’ll give Lanie a pass on this one because there’s a good possibility a medical examiner would catch those details. Lanie said the spatter indicated the shirt had been ripped after the shot was fired. Spatter patterns would definitely indicate this, and, if the shirt had been ripped prior to the shooting there would have been spatter on the exposed skin.

You can view a photo I took of an actual Y incision post autopsy here (scroll down the page). Notice where the incision starts (not at the top of the shoulder).

WARNING – GRAPHIC PHOTO OF AUTOPSY!!! Please do not click the link if this sort of thing is offensive to you.

– Of course, we were treated to an entry into a suspect’s apartment, an entry that was without a warrant. Shouting, “NYPD!” does not automatically grant access to a private residence.

– Ryan and Espo each receive a black eye while attempting to connect with a suspect, a suspect who just happened to employ very large security personnel. Yep, the security dudes landed a couple of hard licks to the noggins of the dynamic duo. What I found to be realistic in this scene was that Ryan and Espo did not give up. Instead, they fought the fight until the behemoths were in cuffs, and the suspect was in custody. That’s how it’s done in real life, too. Cops don’t give up. Once they commit to an arrest, they see it through until the cuffs are on and the bad guy is in their custody. The time to worry about the bruises and cuts is later.

All in all, the episode was fun. The focus was not on the case, but on the newly budding relationship between Castle and Beckett. And that’s a good thing for Castle fans.

Lanie, on the other hand, should remember my line…good fiction is believable make-believe. Unfortunately, her character is still not believable.

Josh Moulin: What Information Is In Your Digital Images?
Scroll to top