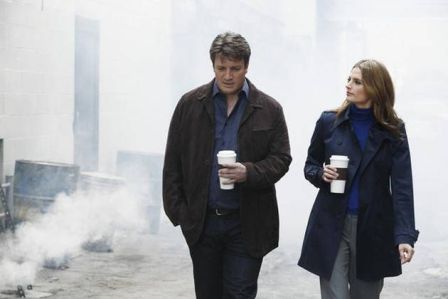 Well, it happened. They’re together. And if what we saw last night was any indication of the intensity…well, they’re probably still together as you read this review (and I don’t mean they’re together having coffee either).

But, how it all plays out now remains to be seen, because it’s just not cool, or safe, to have your romantic partner at your side while you’re serving a high-risk search warrant (I know, Beckett and crew never bother with obtaining search warrants) or shooting it out with evil villains. Still, I’m thinking…no, I know, there are thousands of fans all over the country who are extremely happy this morning. And Melanie is one of those giggling, gushing shippers. So take it away, Mel, before you explode…

The episode title says it all. The Beckett-Castle catch word. Always. Never mind the angst, the pain, Beckett’s fruitless fight for justice. Marlowe and company promised satisfaction for us shippers, and they finally delivered. Did they ever!

For starters, Rick invited Kate for a movie date to help him survive the sadness/joy of Alexis’ graduation night — and she said yes. Was he shocked? Yes! Shocked… and breathless. Then she took his hand after the case broke, and he told her she wouldn’t fight alone this time. I loved that scene. So sweet, so heartfelt. So Kate and Rick. Then more came out about the murder, and who had done it, and they grew positive it was connected to Kate’s shooting/her mother’s case.

Rick tried to talk Kate down, tried to get her to step away. Nathan rocked that scene. Wow. I had tears in my eyes, too. Rick’s desperate I love yous broke my heart, because Kate, feeling betrayed by his secret and still so fixated on her mother’s case, refused to heed his warnings. Refused to back down, even though he begged her to choose him. To choose life.

So he walked away. That had to be the hardest thing he’d ever done, but he just couldn’t take it anymore… and I don’t blame him. At that point, I wanted to walk away, too. What an idiot Kate was to face that guy on that rooftop alone. Even with Esposito’s help, she was no match for that well trained assassin. If not for Ryan defying Kate and Esposito’s wishes and going to Gates, she would have died.

Gates was right to suspend them. I knew Kate was going to resign, because I’d seen the sneak peeks, but it still hit me in the gut. Didn’t seem like a Beckett thing to do. Then I saw the scene in Castle’s loft, against the door, and it all made sense. Will she try to get her job back next season? I’m betting on it. Still, the symbolism in that scene, with her staring at her badge but ultimately choosing Rick over the job, was so powerful.

I loved the juxtaposition of Alexis’ graduation speech about endings with Kate and Esposito leaving the precinct and Rick and Martha in the audience at her ceremony. Then came the swings. The same swings where Kate and Rick talked in Rise, the first episode of this season. The swings where Kate promised Rick she was going to get better. Kudos for Andrew Marlowe for having her return there… even though the rain was pouring down and sadness reigned. The symbolism here? She’d come full circle, and made an important choice.

She chose Rick. The next to last scene, when she showed up at the loft, blew me away. Talk about intensity and heat and chemistry… Nathan and Stana brought it in spades. Wow. Kisses, apologies, gentle touches… “What happened?” Rick asked after Kate apologized. “He got away, and I didn’t care,” she said. “I almost died… and all I could think about was you. I just want you.” Holy moly! I can’t tell you how many times I’ve watched that part already, because I’ve lost count. You can laugh at me, but I’ve been craving that for four long years. Finally! Kate and Rick are together… and I love it.

I did not expect the last scene, however, and the looming threat still hanging over Kate’s head. Yet I choose to believe Rick will protect her and things will work out in the end. They have to, because Marlowe declared long ago that his plan was for Castle to be “a great romance”… and all true romances end in happily ever after.

Thank you, Andrew and Terri (Andrew’s wife, Terri Edda Miller, who co-wrote the episode with him) for a stellar finale despite Beckett’s stubbornness. I already can’t wait for season five, and we have over four months to wait. Aarrgghh!

Okay, you know what’s coming. But I have no choice…the show opens with Lanie. Before I start in on her nonsensical babble, though, I want to thank those of you who sent all the absolutely marvelous hate mail last week. After reading some of those messages, well, you’d think I’m the person who writes Lanie’s crappy lines. But I’m not! So don’t blame me for the ridiculous garbage we hear spilling from her lips. However, I, too, wonder why they write this stuff for Lanie but not for the others who play similar parts.

Anyway, it was Lanie and her X-ray specs and crystal ball that we were forced to endure this week. Starting with… 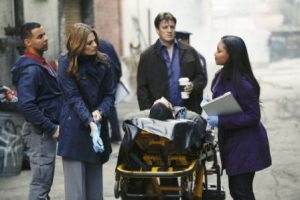 “He was hit in the shoulder with what looks like a .357, but the kill shot was point blank, execution style with a 9mm.”

Well, you know, you can’t tell the caliber of bullet merely by looking at an entrance or exit wound. And that’s especially true when the shot is fired from a distance and/or from an angle. Even the close contact wound to the forehead would be difficult to narrow down to a specific round (9mm’s and .38’s are pretty close to the same size). For example, what size (caliber) rounds (bullets) made the holes in the door of the LAPD police car in the photo below? How many different weapons were fired? What calibers? 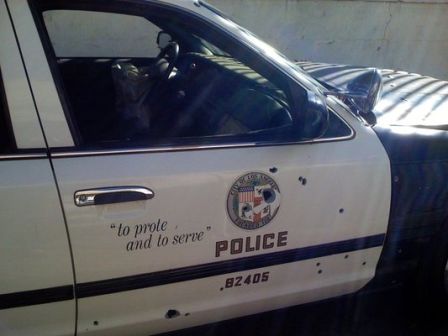 Give up? The holes were all produced by the same weapon and same rounds. So you can see how difficult it is to make a determination by sight alone. And, at times, it can be a bit more difficult when the holes are in human flesh because flesh is pliant and can close in around the wound. Or, the flesh can tear, making the wound much larger than the object that penetrated it (like the metal around the bullet holes in the car door above).

Unfortunately, Lanie didn’t stop there. “Grooves in the shoulder indicate that he was carrying something heavy…” Okay, I’ll go along with that, but she couldn’t leave well enough alone. “…I’d say at least 30 lbs.” Why not 20lbs.? Or 70, or 43, or…?

Anyway, after all her psychic predictions she finally said, “But I’ll know a lot more when I get him back to the morgue.” Bravo, Lanie. That’s what you should’ve said in the first place.

Actually, the conversation should’ve been more like, “Well, the cause of death was more than likely the gunshot wound to the forehead. But I won’t know know for sure until I get him back to the morgue. After all, he could’ve bled out from the shoulder wound. It looks pretty nasty…probably a large caliber weapon. Maybe a .357 or .44.”

Okay, enough of Lanie. Now for the entry into the gang guy’s apartment. First of all, homicide detectives aren’t the officers who normally suit up in SWAT-type gear and then use explosives… Hey, wait a minute. Why did they use explosives to take out half the wall? Why not a battering ram? After all, the charge was so large that it certainly would have harmed the officers who were standing beside the door. Definitely overkill for dramatic TV. No, it’s not like that in real life. However, explosive charges are sometimes (rarely) used when entry absolutely cannot be made any other way, such as when attempting to breach fortified buildings. But not for thin wooden apartment doors, and especially not when there are other people living in close proximity.

– Castle trying to stop Beckett’s harsh interview tactics was a little off for me, unless he was playing the part of the good cop. Oh, wait a minute…HE’S NOT A COP! But now neither is Beckett, for the summer anyway.

You know, I’m not going to get into the relationship aspect of the episode. I think Melanie has that covered nicely (and boy are the two of us butting heads over this stuff!). I will say, though, that I’ve grown a little weary of Alexis acting like a 12-year-old. You’re going to college. Get over it. Grow up. And stop whining!

I almost forgot…what was up with the evil villain guy? He’s on a relentless mission to kill Kate Beckett, a single woman who lives alone in an apartment. She goes to work everyday, in the same place during the same hours. Her only partner riding in the car with her is an unarmed, goofy writer. How difficult would it be to take her out? Instead, this pitiful excuse for a hit man employs tactics like another famous villain…Wile E. Coyote. Yep, the similarities are uncanny. As simple as the task at hand should be, Wile E. orders weapon after weapon from ACME—non-exploding bombs, fake holes in mountainside, uphill-rolling boulders. And our super villain is no different. He had his own roadrunner (Beckett) hanging from a ledge by the tips of three or four fingers, when the ACME ledge-falling device backfires and Kate survives, and I think I know how she did it. 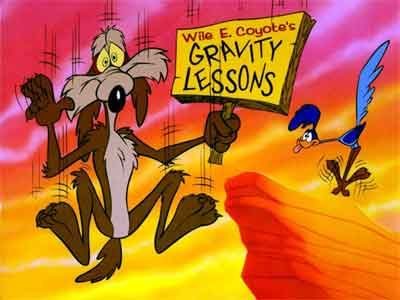 See you next season…