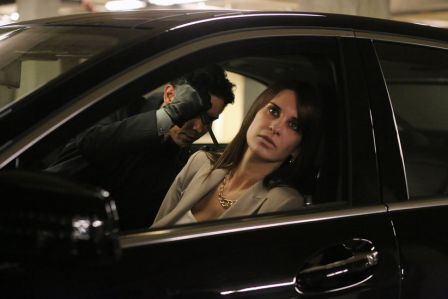 Am I the only person in TV Viewerland who caught the significance of the scene involving Beckett and Castle’s big cat poster/painting? You know, the one where she made him hide his “lion” eyes… Get it? The Eagles song, Lyin’ Eyes. Oh, stop with the groaning. It’s just my quirky and corny sense of humor leaking out on this happy 11-12-13 day.

Okay, since my little joke fell flat, I’ll turn things over to Melanie.

I liked this episode. It didn’t make my top ten list, but it kept my attention. My favorite part, of course, centered around Rick and Kate’s tug-of-war over the huge painting of Linus the lion in Rick’s bedroom, but I have to admit the case grabbed me, too. I could have done without so many bad clown puns after the dudes in the clown masks ambushed Ryan and Esposito, but all in all I enjoyed this one.

I won’t address any of the forensics or the case itself, since I’m sure Lee will tackle that. I’d rather focus on Linus. Kate still has her apartment, but apparently she doesn’t stay there much. Every time we’ve seen her lately, she’s been at the loft, waking up in Rick’s bed. Has she officially moved in? I don’t think so, but she seems to be making herself right at home. I mean, asking Rick to move Linus, a fixture in his man-cave bedroom? Go Kate!

The two of them are obviously getting closer, and I wouldn’t be surprised if Kate didn’t ditch her apartment pretty soon and move all of her stuff into the loft. Not that Rick has asked her to move in with him… but then again, he’s a guy. She stays at his place most nights anyway, so inviting her to live with him probably hasn’t even crossed his mind. Or maybe he doesn’t want to push her too far too fast — a scenario that doesn’t really ring true since she accepted his proposal and has been urging him to look at wedding venues. I prefer to believe they’ve just been busy and are taking their time. Why rush the inevitable when they already stay together most nights?

Rick’s compromise at the end of the show by replacing the painting of Linus with a shadow box of shells he and Kate picked up together in the Hamptons spoke volumes about his willingness to welcome her into his home. No, wait. Their home.

I look forward to next week’s episode, described by some as the “double doppelganger” episode. Lee should love it because it features two Lanies (even though one is on a slab). Right, Lee?

All right, let’s place all our cards on the table. First of all, this episode, in my opinion, was the best of the season so far. I say that because there was a little something for everyone—romance, a murder, a story with nice twists and turns, and a killer who wasn’t obviously obvious. Yes, the writers fooled me this time. However…

Lanie, Lanie, Lanie. She was doing just fine until she used the “L” word (lividity). Lanie told Beckett that she based the victim’s time of death (TOD) on body temperature and lividity. Everyone knows about lividity right? Good. I won’t go into too much detail, then. What I will say is this. In short, post-mortem lividity is the purplish discoloration of the skin after death, due to gravity pulling the blood to the lowest portion(s) of the body. Once there, as decomposition progresses, the vessels break down and cause the eggplant color staining of the surrounding flesh. Lividity is quite visible and is sometimes mistaken (by the layperson) as severe bruising.

Okay, back to Lanie. The murder victim, Alice Clark, died in a seated position. Therefore, gravity would have pulled the victim’s blood to the lowest part(s) of her body—her lower legs, feet, and her rear end. Since poor little Alice Clark was fully clothed when Lanie arrived and was still fully clothed when Lanie offered her...sigh...voodoo/Ouija Board predictions, there was no way she’d have seen any signs of lividity other than in/on the victim’s bare hands.

Lividity is not the best indicator of time of death since it becomes fixed (the process is complete) at around the 12-hour mark (after death). During that 12-hour +/- period, if the body is moved (rolled over, for example), the staining of tissue will then move to the latest low point. Once fixed, though, the staining will no longer transfer.

Anyway, to get back on point, Lanie was basically gazing into a crystal ball for this TOD prediction.

It was nice to see the “I can do everything and anything” IT woman search the database of license plates that was generated by the many license plate readers located throughout the city, and mounted on police vehicles. This is a very real and current technology that’s catching on across the country. In fact, there are grants available to police agencies that help them purchase the devices.

The shootout scene between Ryan and Esposito and the clowns (the bad guys wore clown masks) was especially well done. One tiny thing, and I realize the options were limited, but it’s best to not run in a straight line if you’re trying to escape gunfire. A moving target that’s zig-zagging is much more difficult to hit. Running away in a straight line makes for an easy target. Still, this was a great scene, and the facial expressions (not those of the clowns) were a nice bit of acting.

As I said earlier, the writers fooled me this time. I didn’t guess the killer’s identity until the last scene just seconds before the confession.

Overall, this was a really nice episode. I needed it, too, because it looks like we’ll be getting a double dose of Lanie next week.

Oh, I almost forgot…No Pi, and no whiny Alexis this week. Even Gates was okay. Well, with the exception that they all still address her as “Sir.” That is so dumb.

How about you? What did you think of this episode? Good? Bad? Just happy that Pi didn’t show up?

Followon TwitterSubscribeto RSS Feed
Cutting Brake Lines: A Thing Of The Past?

Does Your House Sometimes Feel Intimidated, Or Fearful?
Scroll to top