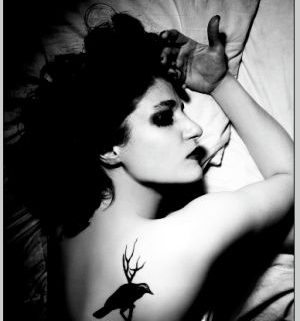 Alix Lambert’s feature length documentary “The Mark of Cain” was nominated for an Independent Spirit Award and aired on Nightline. She went on to produce additional segments of Nightline as well as produce 7 segments for the PBS series LIFE 360. Lambert has written for a number of magazines including Stop Smiling, ArtForum, The LA Weekly, and GQ, among others, and is an editor at large for the literary journal OPEN CITY. She wrote Episode 6, season 3 of Deadwood: “A Rich Find” and was a staff writer and associate producer on John From Cinicinnati.

When I was interviewing people for my book CRIME, which explores the intersection between art and crime by juxtaposing interviews with people in the real world of crime – criminals, members of law enforcement, victims, lawyers, etc., with artists who represent crime in their films, acting, writing, music, etc. – I usually started by asking: What is your first memory of crime? I am interested in how we form our ideas about criminal behavior. I think I was starting to scratch at the desire to find a thread through someone’s (mine, yours, anyone’s) life that leads us to where we are today. Just defining Crime at all is an immeasurable task. Are we talking about simply the breaking of a law? Well, there are absurd laws that still exist to this day. In Illinois it is illegal to speak English. The officially recognized language of Illinois is “American.” In Ocean City there still exists a law that says that pinball machines are not to be played on a Sunday. 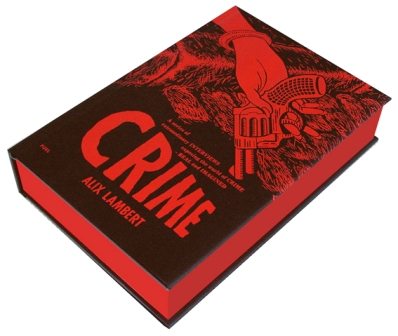 “Crime” runs the gamut from small and amusing: when I complimented my Aunt on her matching, silver salt and pepper shakers she announced with some measure of pride that she had stolen them at the wedding reception of a friend – to large scale and unfathomable: US government endorsed torture that we are being faced with increasing evidence of daily.

My own first memory of crime was when I was maybe seven or eight. I had a babysitter, Sue, who had taken care of me since I was two years old. She was pretty tough. She let me and my sisters ride on the back of her motorcycle and she’d put us in the back of her pick up truck to take us to the drive-in movies or to the Demolition Derby. One night Sue was strangled at the deli where she worked. She had been on the late shift and fallen asleep in one of the booths. A young man broke in to rob the place and she surprised him. He strangled her until she fell unconscious. When she came around and saw herself in the mirror she threw up. All the blood vessels in her eyes had burst, turning the whites of her eyes solid red. She bit all the way through her tongue and there were bruises on her neck in the shapes of hands. But what had a bigger effect on me was that she was afraid, afraid to go outside, afraid to hang out in our tree house. I interviewed her for CRIME.

I moved to New York immediately after high school to go to art school. Much of the art I was making dealt with how people communicate non-verbally. A friend gave me a magazine article about the system of tattooing in the Russian prisons. The tattoos establish rank and function as a complex visual language, which allows the prisoners to communicate with each other. I was fascinated and wanted to make a documentary on the subject. Eventually I was able to visit and film inside of eight prisons in Russia and to complete my film: The Mark Of Cain. 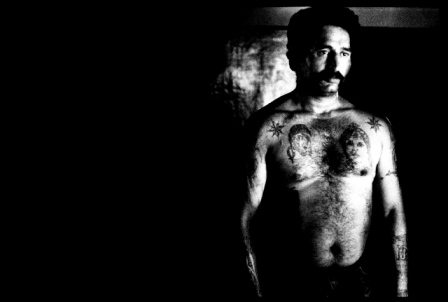 A number of interviews with inmates I met in Russia needed to be shortened or cut completely, in order to shape a film out of the 53 hours of footage I had.

I started looking for an opportunity to publish some of these interviews. Nightline devoted an episode to my documentary and soon after that I got a call from the FBI asking if I would screen the film at their convention on Russian Organized Crime. I agreed and went to Sacramento where the conference was being held. There I met an undercover cop who was game to be interviewed. He also agreed to be photographed (along with his family). 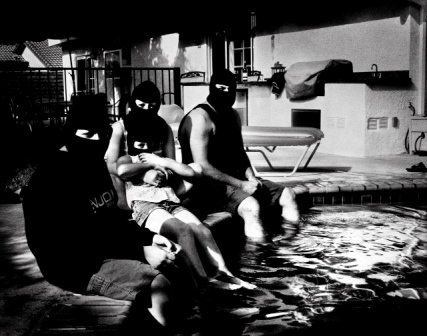 I continued to collect and squirrel away interviews and photographs with the idea of publishing them some day. I met Damon Murray and Stephen Sorrell by way of our shared interest in Russian prison tattoos. They had published 2 (now 3) editions of Russian Criminal Tattoo Encyclopedias. We began talking about publishing a book together, and started to pull focus on what ultimately became: CRIME.

For CRIME I interviewed a wide variety of people, from Ice-T (who explains any number of different ways to rob a jewelry store) to Chief Bratton (the only person ever to serve both as Chief of Police in Los Angeles and as Police Commissioner in New York), to Elmore Leonard (who has written over forty crime novels, several of which have been turned into films), to Takeshi Kitano (who was once abducted by the Yakuza) and on.

Through a mutual friend I met Joe Loya. Joe robbed over thirty banks and sat 8 years in prison. While in prison he began to write. After getting out, he published his memoir: The Man Who Outgrew His Prison Cell. My interview with Joe became chapter one of my book. We spent a day together going to 5 of the banks that he robbed and I photographed him coming out. One of the banks had been turned into a tamale shop. I took the picture anyway. 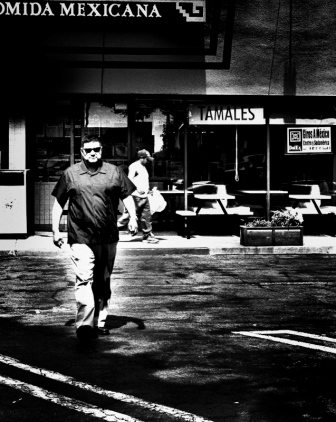 I flew to Tokyo to meet with Takeshi Kitano. I photographed him in a stunning, traditional Japanese restaurant. The women who worked there got dressed up in anticipation of his arrival. 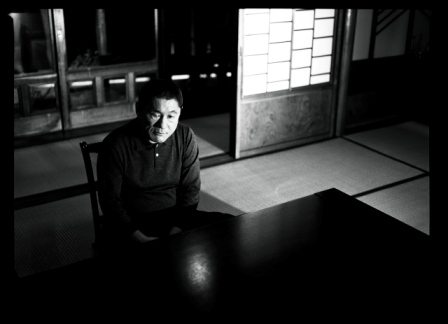 I met Patty Jenkins (director of the film Monster, which depicts the Aileen Wournos case) at a restaurant near where I used to live in Los Angeles. I decided to try to use an old photography light that had belonged to my grandfather. It had a warning on it – GETS VERY HOT! I placed it on the table and raised my camera to look through the lens. It was only seconds before smoke started to come off the table, I lifted the light and there was a big burn mark where it had been resting on the wood. We left quickly and quietly. 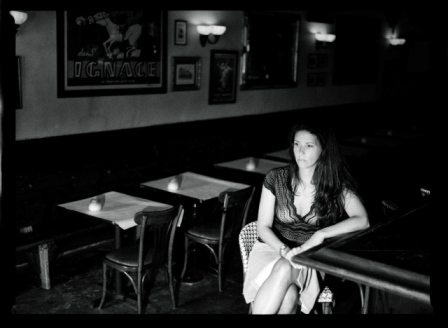 People’s stories poured out of them. They were alternately, funny, heartbreaking, angry, resigned, defensive, gentle, proud, embarrassed and brave. They were all fundamentally human. So, what is crime? And why is it so compelling to so many of us? I have more questions now than ever. I will say this though: a Sunday afternoon game of pinball in Ocean City sounds pretty good right about now.