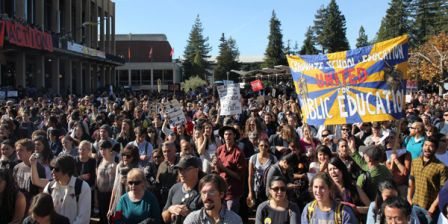 Occupy Wall Street has been going on for months now, and although reactions to the movement are mixed, there are protest locations numbering somewhere near 1,000. Within that number are several college campuses that boast major Occupy movements, whether there’s a presence on campus, or simply very active students involved in their local Occupy chapter. There’s even an Occupy Colleges movement, formed to protest college tuition hikes amid staggering student loan debt. Like Occupy Wall Street, Occupy movements on college campuses have been met with mixed reactions, some finding great support in university administration, and others fighting an uphill battle. Read on, and we’ll take a look at the beliefs, incidents, and status of 11 college Occupy movements going on today.

1. Occupy Duke: On the Duke University campus, students are getting involved in social activism. And although there is a local Occupy movement, Occupy Durham, students at Duke have decided to strike out on their own, citing issues with the Occupy Durham group, as well as a need to focus on problems within the university. Occupy Duke has created a peaceful camp on campus, offering a space to “create a platform for discussion.” Occupy Duke member Anastasia Karklina shares, “A lot of students here are from different economic backgrounds, and this is a self expression, a way to protest and express the way you’re discontent with the way things are, so I don’t see it as occupying yourself or occupying a privileged institution.” Faculty on campus at Duke have been primarily supportive, and have formed a group, calling themselves “Faculty in Solidarity.” Duke administrators have permitted an indefinite campout, and the dean of students has praised the movement’s high level of commitment. Occupy Duke tries to have at least one faculty or staff member present at all times, and Occupy Duke member Maria Arias indicated that having a faculty member on hand helps students to better understand the arguments being made by Occupy Duke and the larger Occupy movement. “It’s a good cause, well worth supporting,” Professor of Literature Kenneth Surin said.

2. UC Berkeley: UC Berkeley’s Occupy camp has made the news recently, with an incident between protesters and police on Nov. 9. Berkeley’s Occupy demonstrators attempted to establish an encampment on campus, but it was dismantled, and protesters were pulled off the steps of the administration building, some with the use of batons. Previously, the university administration indicated that protesters could stay around the clock for a week, provided that the camp didn’t have any signs of people living there, such as tents and stoves. The protesters did not comply, and set up an Occupy Cal tent site. The resulting incident that followed as police attempted to dismantle the site has sparked a debate over whether the police reaction was acceptable, or went too far. Still, the incident and fervor that has been sparked only goes to show that Berkeley has a strong Occupy movement that is not going away any time soon.

3. Seattle Central Community College: One might expect major protest movements to be centered on large universities, but in Seattle, a small community college is providing nighttime shelter to the city’s Occupy protesters, which now number somewhere between 100 and 200 overnight. The protesters, who have been through weeks of tension with Seattle’s city hall and police, agreed to move their tents to Seattle Central Community College, spending their nights on campus and days at protests occurring at Westlake Park. The group has promised not to interfere with academic activities, but the college has already decided they’d like the movement to leave. The college estimates that the demonstration is costing $20,000 a week, with reports of vandalism, and a need for additional security and cleaning crews. Demonstrators say they have no plans to move, while college administrators are researching legal ways to remove them from campus. Still, some in the college are finding a way to make use of the Occupy presence, with some professors hosting classes right in the camp. Professors offered their knowledge and resources, teaching protesters how to get their message across with history lessons, Martin Luther King letters, and more.

4. Boston University: Students from Boston University have been an active part of the Occupy Boston movement. They typically get involved by meeting on campus at Marsh Plaza, and then marching together to join other protesters. On Nov. 8, about 30 students also set up their own overnight encampment at Marsh Plaza as a contingent of Occupy Boston, right next to the statue of Martin Luther King. They vacated the space the following morning, after police officials and the dean of students asked them to leave, citing the lack of a proper permit for protesting in the space. This is not the first bit of trouble BU students have run into with Occupy Boston. In mid-October, about a half dozen BU students were among the 141 Occupy Boston protesters arrested in a police confrontation. Originally, 100 students had marched to join the protest, and the college’s BU Occupies Boston page has more than 500 members.

5. Auburn University: In early October, Occupy Wall Street found its way to Auburn University, as supporters began gathering at Ross Square on campus. The group has had good support even from the beginning, with over 200 people liking the Occupy Auburn Facebook page within its first week of existence, and by mid-October reaching more than 500 people. The group has spent time handing out leaflets at game days, discussing the movement, and gaining interest. The Occupy Auburn movement has been quick to point out that they don’t intend to be freeloaders, rather, they want to spread the wealth for others. On Oct. 28, the group gathered at Toomer’s Corner, displaying signs that shared phrases like, “I have a job and I Occupy Auburn.” Feeling misunderstood, the group wants everyone to know that they’re not looking for a handout, but a level playing field. They’ve encouraged others to engage in local banking and shopping to help discourage corporate greed and bailouts.

7. University of New Mexico: The (Un)Occupy Albuquerque group at the University of New Mexico has already had lots of run-ins in its short life. In late October, the group had several incidents with authorities, including the arrest of a man threatening protesters with a knife, and paramedics called to the area to treat someone who had collapsed, and subsequently died. The university responded by citing a difficulty to determine who exactly was a part of the (Un)Occupy protest. (Un)Occupy Albuquerque held a funeral procession for the First Amendment, citing an apparent violation of their constitutional rights by UNM. The ACLU came to the group’s rescue, and they were issued a new permit after a new agreement was facilitated. In early November, UMN hosted an Occupy Wall Streed/Unoccupy Albuquerque teach-in, focusing on the issues underlying the Occupy Wall Street movement with speakers including UNM faculty, deans, students, community activists, and even New Mexico Senator Tim Keller.

8. Oklahoma State University: At its inception, Occupy OSU identified itself as mainly a “group of people who are not afraid to go to jail,” citing the very real possibility of arrest as a protester in the Occupy movement. But they haven’t let that possibility keep them quiet, with plenty of events that have already happened, and more planned with the intent to air their disagreements about what’s going on at Wall Street. In late October, Occupy OSU joined the Occupy Your Capitol effort, staging a demonstration at the Oklahoma City capitol building. The group has focused its efforts on being a part of larger movements within the state, joining up with Occupy OKC and offering help in the form of supplies and lending their numbers to larger demonstrations. OSU’s occupation plans to take their cause to the Payne County Courthouse in Stillwater to make their movement even more prominently known in Oklahoma.

9. Humboldt State: Occupy Humboldt has found lots of support on campus, with several weeks of occupation at HSU on the Humboldt State Quad, and perhaps most interestingly, formal support from the Associated Students of Humboldt State University. On Oct. 17, a resolution from the Associated Students expressed support for the presence of Occupy Humboldt on campus, recognizing the constitutional rights of the occupiers, and calling on campus administration to allow occupiers to sleep and camp at the site. The camp on the HSU Quad has several tents, each with a purpose, including a library, first aid station, and sleeping quarters. The university has seemed to remain benign, and as of late October, reported seeing no need to confront participants or force them away. In fact, one HSU student and Occupy Humboldt organizer reports that the police have even been supportive.

10. Occupy UCLA: On Nov. 9, Occupy UCLA made a huge stir when 11 students sat at the middle of Wilshire Boulevard, shutting down the street for two and a half hours. The students were arrested, but all were bailed out. In all, 200 protesters were there to make their voices heard. These particular students were protesting as part of ReFund California, protesting tuition hikes and service cuts at public universities in California. Previously, Occupy UCLA had pitched tents on campus at Bruin Plaza, but the campout was short-lived due to missing permits. Interestingly enough, the campus has also been home to another Occupy movement, Occupy UCLA Athletics, a group that has voiced its disenchantment with the UCLA football program.

11. Occupy ISU: At Iowa State University, more than 200 people turned out to protest as part of the Occupy movement. The group has plans to make a difference at the state level, with the hope that a smaller movement can have a larger impact if applied at the right level. The Occupy ISU students made their voices heard by walking out of classes together and brandishing signs in solidarity, moving from the campus out onto the community streets. The students highlighted problems with school debt, and inability to find jobs after graduation, with one protester in particular wearing a box that shared, “My Student Debt is Boxing Me In.” Other students shared their problems, highlighting the plight of so many: working multiple jobs with a full course load and struggling to pay tuition and rent. The group has more events planned, and has worked together with the local Occupy Ames group.

* Today’s article is courtesy of www.onlineuniversities.com

Followon TwitterSubscribeto RSS Feed
Could You Spot A Stolen Car?

Silence And Tears: Page 104 Of My Spiral Notebook
Scroll to top