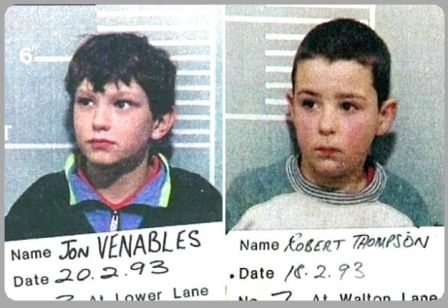 Murders happen every day, but very rarely are they committed by people who can’t see over the witness stand. According to the U.S. Office of Juvenile Justice and Delinquency Prevention, juvenile offenders were involved in approximately 1,043 murders in 2006, which accounts for 10 percent of all murders. Children may commit a small percentage of all murders in the United States overall, but they aren’t a demographic that we can afford to ignore. Here are the 10 youngest murderers in history:

1. Carl Newton Mahan: Carl Newton Mahan was six years old when he killed his friend Cecil Van Hoose, 8, over a piece of scrap iron on May 18, 1929 in eastern Kentucky. Since times were tough, the two young boys were out looking for scrap metal to sell to a junk dealer for money. They began fighting over a piece of scrap iron, and Cecil hit Carl in the face with it. Carl ran all the way home with Cecil in tow. He grabbed his father’s shotgun and threatened to shoot Cecil — and he did. Carl went to trial for the murder of Van Hoose. The original sentencing was 15 years in reform school, but it was later turned over and the judge issued a “writ of prohibition” that kept him from going to reform school. At that time, Carl was the youngest murder defendant in the state of Kentucky and possibly in the country.

2. Robert Thompson and Jon Venables: Robert Thompson and Jon Venables were both 10 years old when they abducted and killed two-year-old James Bulger in 1993. The young boys snatched the toddler from a shopping mall while his mother was inside a store, and took him on a 2.5-mile walk across Liverpool. The boys were seen walking by approximately 38 people, but many assumed he was their younger brother. Venables and Thompson took Bulger to a railway line where they tortured and brutally attacked the toddler. Bulger suffered multiple skull fractures from blows to the head, and was sexually abused by the two older boys. After the beatings, they left Bulger’s lifeless body across the railway tracks so that his body would be cut in half. Police were able to pin Venables and Thompson because of video images that captured Bulger’s abduction from the mall. DNA testing matched the blood found on the boys’ shoes to Bulger. Thompson and Venables were arrested and controversially tried and convicted in an adult court. They were both found guilty of murder and sentenced to custody until the age of 18.

3. Lionel Tate: In 2001, Lionel Tate, 14, was convicted of first-degree murder for brutally beating 6-year-old Tiffany Eunick in 1999. Tate became the youngest person ever sentenced to life in prison without possibility of parole. On the night of the murder, Lionel’s mother Kathleen Grossett-Tate was babysitting the kids. She let 12-year-old Tate and 6-year-old Eunick play downstairs while she went upstairs to take a nap in preparation for her overnight shift as a Florida State Trooper. About 45 minutes later, Tate told his mother that the young girl wasn’t breathing. Tiffany was pronounced dead at the hospital. Tate, who was nearly 6 feet tall and 166 pounds, admitted to wrestling with the 48-pound girl and holding her in a headlock and slamming her head into a table, but the autopsy showed more serious injuries inflicted by Tate, including a crushed skull, broken ribs and a shredded liver that had been pushed through her rib cage. The Broward State Attorney’s Office tried Lionel as an adult and punished him with a severe sentence to life in prison without parole. The conviction and sentencing shocked the nation and spurred discussion about the prosecution of children in America.

4. Mary Bell: In 1968, 11-year-old Mary Bell was convicted of killing two young boys, 4-year-old Martin Brown and 3-year-old Brian Howe. Bell strangled Martin Brown and left his lifeless body in an abandoned house in Newcastle, England. Two weeks later, she and her 13-year-old friend Norma Bell (no relation) strangled Brian Howe, carved the letter M into his stomach with scissors and disposed of his body on waste ground. Howe’s hair had been cut and his genitals were mutilated. The girls were tried and convicted of manslaughter, but Norma was acquitted. Bell received life in detention, but only served 12 years before she was released and given lifelong anonymity.

5. Andrew Golden and Mitchell Johnson: Andrew Golden, 11, and Mitchell Johnson, 13, were responsible for killing four students and one teacher and wounding 10 others at Westside Middle School in Jonesboro, Arkansas on March 24, 1998. The incident became known worldwide as the Westside Middle School Massacre. Golden and Johnson had carefully planned the attack. On the morning of the shooting, the boys snuck into Andrew’s grandparent’s house and stole several guns and ammo from his grandfather’s collection and loaded their weaponry into Mitchell’s parents’ minivan. Mitchell was marked absent from school that day, but Andrew attended so that he could pull the fire alarm and meet up with Mitchell in the woods to prepare for their ambush. As soon as students and teachers started filing out of the school for the fire drill, the boys started the shooting spree. Police captured the boys in the woods and took them into custody. Under Arkansas law, the boys couldn’t be tried as adults because of their age, but they were charged for five accounts of murder in Juvenile Court and held as juvenile delinquents until age 18 and served an additional three years for federal gun charges.

6. Jordan Brown: In 2009, 11-year-old Jordan Brown shot and killed his father’s pregnant fiancé Kenzie Houk and her unborn son as well. According to police reports, Jordan walked into his father’s room and shot Houk with a hunting rifle while she was sleeping, and boarded a school bus like normal. Houk’s body was discovered by her 4-year-old daughter Adalynn. Police have reason to believe Jordan is the killer after discovering gun residue on his shirt, a fresh shell casting outside and Houk’s oldest daughter’s testimony that she saw Jordan holding the gun. Brown was arrested and charged as an adult for the murder of his soon-to-be stepmom. The case hasn’t gone to trial yet, but Jordan’s father stands by his son’s innocence. The state of Pennsylvania is tough on crime laws and considers any kid charged with murder an adult in court. In order to move Jordan’s case to juvenile court, a judge will have to overturn the rule. If convicted as an adult, Jordan could become the youngest person in U.S. history to be sentenced to life in prison without parole.

7. 8-Year-Old Boy Kills Father and Friend: In 2008, an 8-year-old boy, whose name was not released, was arrested and charged with shooting and killing his father and his father’s friend in their St. Johns, Arizona home. The young boy confessed to shooting both men with a .22 caliber rifle, but police felt something bigger caused the boy to commit such a premeditated murder. The boy also kept a tally of spankings he received from his father, but there was not enough evidence to support the possibility of abuse. He was originally charged with two counts of first-degree murder, but the charges for his father’s death were dropped by his plea deal. Two years later, the 10-year-old was sentenced to a residential treatment facility and intensive probation until 18 years of age.

8. Eric Smith: Eric Smith was 13 years old when he sexually abused and murdered four-year-old Derrick Robie on August 2, 1993 in Steuben County, New York. Eric and Derrick lived in different parts of town, but attended the same recreation program a block away from the Robie household. Derrick’s mother was tending to her youngest son and wasn’t able to walk Derrick to the end of the driveway like she normally did. That day, she let her son walk one block alone for the first time. Within those short five minutes, Derrick was lured from the sidewalk into the woods and strangled by Eric. Derrick was sexually abused and his belongings were strewn around his body. Even the contents of his lunchbox were poured out and smashed near him. As details unfolded, Smith became police’s number one suspect. The innocent looking redhead with thick glasses admitted to killing Derrick, but never gave any real reason why he did it. In 1994, Smith was tried and convicted of second-degree murder and received a sentencing of nine years to life in prison, which was the maximum term given to juvenile murderers.

9. 9-Year-Old Girl Kills Playmate: In 2005, a 9-year-old girl, whose name wasn’t released, was responsible for stabbing 11-year-old Queen Washington during a fight over a ball. They were playing at the 9-year-old’s home in Brooklyn during a Memorial Day barbeque, and when her mother stepped out of the house, the fight ensued. When the mother returned, the 9-year-old had stabbed Washington in the chest with a steak knife. She collapsed in the hallway and was pronounced dead at the hospital. The killer is likely the youngest person in New York City to commit a murder. The girl was charged with manslaughter and the case will go to family court because she is younger than 14.

10. Andrew Wurst: Andrew Wurst was 14 years old when he entered his 8th grade graduation dance and opened fire, killing John Gillette and wounding another teacher and two students. Wurst showed up late to the Parker Middle School dance held at a restaurant in Edinboro, Pennsylvania, carrying his father’s .25 caliber pistol. According to Wurst’s suicide note, he was going to kill only himself, but he decided to shoot Gillette and open fire on the crowd. He was detained by the owner of the restaurant, who held him on the ground and searched him for weapons. Wurst pled guilty in a plea bargain to third-degree murder and attempted murder to avoid trial, but was sentenced to 30 to 60 years in prison.

Today’s article courtesy of our good friends at Criminaljusticedegreesguide.com.