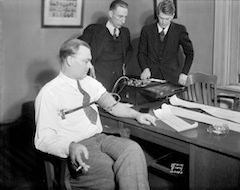 We often post guest articles written by experts. And, normally I check the content for accuracy before posting. However, today one slipped past me. Fortunately, my pal Rick Helms was quick to step in to make sure our readers receive only the best information available. So, here’s the original article as submitted. Please read Rick’s comments below to see how things are really done.

You’ve seen them on TV crime dramas. A potential suspect is wired to a machine via a series of sensors attached to his body while he is grilled by an expert operator with a series of probing questions. Eventually, a needle goes haywire, and the lie is revealed. Well, not so fast. There are some serious misconceptions about the lie detector test, and we’re going to discuss ten of them below:

*Today’s article brought to you by www.nannybackgroundcheck.com

Now, for Rick Helms’ response to the above article. Remember, Rick is the expert, and his comments are spot on.

I was a practicing forensic psychologist for almost a quarter century, and I now teach college psychology, including a course on Forensic Psychology.

This article was written by a company that has a vested interest in the polygraph as part of their investigative processes. It is also erroneous in several different areas.

The polygraph has an error rate between 25-75%, mostly because–while it absolutely DOES measure physiological arousal on three different domains (blood pressure, pulse rate, respiration, and galvanic skin response)– it is impossible to know the reason for that arousal. Arousal is controlled by a system in the body called the Sympatho-Adreno-Medullary process, and it is entirely autonomic. We have no control over it whatsoever,and sometimes (such as in panic attacks) the SAM system activates for no determinable reason. If a doctor used a test that was wrong 25-75% of the time, he’d be sued out of business within a week.

Nervousness, unlike the statement in the article, is PRECISELY the type of arousal measured by the polygraph. Nervousness refers to a set of physiological responses involving elevated heart rate, increased blood pressure, increased sweating (galvanic skin response), and increase respiration, and is the result of the activation of the SAM system in response to an environmental threat–such as, say, being hooked up to a lie detector with your job or freedom on the line.

You absolutely CAN manipulate the results using drugs, such as beta blockers. Propranolol,for instance, in addition to slowing heart rate and reducing blood pressure, also appears to ‘turn off’ the SAM response, which would produce–at worst–an inconclusive polygraph result. This is one reason researchers are exploring the use of propranolol as a prophylactic to help prevent post-traumatic stress disorder. By stopping the extreme arousal and anxiety associated with the trauma, the drug prevents the formation of the classically-conditioned intrusive flashbacks and dreams and phobic responses symptomatic of PTSD. Propranolol cannot be detected during “pretest verifications” by polygraphers, mostly because they aren’t qualified to do such tests.

The absolute best way to beat the polygraph, of course, is to be born a psychopath. Because of structural differences in their brains (mostly surrounding areas in the limbic system associated with the SAM arousal process), they don’t experience physiological arousal when doing things like stealing or lying. Their test results will be–at worst–inconclusive. In some cases, they will be exculpatory.

Polygraph results may, as mentioned, be entered into evidence in court, but only by defense attorneys as exculpatory evidence, and any attorney who tries to do it is asking to have his ass handed to him because the prosecutor will pull in expert after expert to discredit the evidence.

The only people who truly endorse the polygraph as a method to differentiate between truth and mendacity are…surprise!…polygraphers. The polygraph is SO unreliable and imperfect that the United States Congress was compelled to pass the Polygraph Protection Act, which forbids businesses from using the polygraph as a hiring tool, mostly because it was found to be discriminatory and a poor indicator of lying.

Every article touting the ‘effectiveness’ of the polygraph also notes that it should be administered by “a well-trained and qualified examiner”. This is a psychological trick called the ‘halo effect’, and may actually be one of the few benefits of the polygraph. By establishing your own expertise, you endow a scientifically useless machine with powers it doesn’t have.

You could (and I have) hook a person up to a stereo receiver, claim it is a polygraph, and then tell the person–forcefully and confidently–that he is lying when he denies his guilt. On the majority of occasions, that person will break down after repeated confrontation and admit their culpability, mostly because they come to believe that the machine has ‘found them out’ due to the ‘polygrapher’s strong endorsement of it. Unfortunately, like many interrogation processes, the potential for false confessions is always there.

Like eyewitness testimony, which is notoriously unreliable, the polygraph has severe limitations and faults, and I have repeatedly told my students to refuse it, if offered, simply because it has no validity or true ability to differentiate between truth or lies.

In fact, the only completely accurate statement in the article is #10. You absolutely can fail this test even when you are telling the truth. In fact, that can happen as much as 25-75% of the time. As a result, I would suggest that, as a forensic tool, the polygraph is essentially useless. It does, however, make a lot of money for polygraphers, so it shouldn’t be surprising that they enthusiastically endorse it and promote it–erroneously–as a valid and reliable assessment tool.

Want to learn more about polygraph exams? How would you like to see the equipment in action? Well, the 2012 Writers’ Police Academy is featuring a detailed, hands-on polygraph workshop just for you! And, we’ve just secured more workshop and classroom space so we have a few open slots. Please hurry. Register today!

9 Signs Self-Publishing Is Out of Control: Opinion, or Fact?
Scroll to top