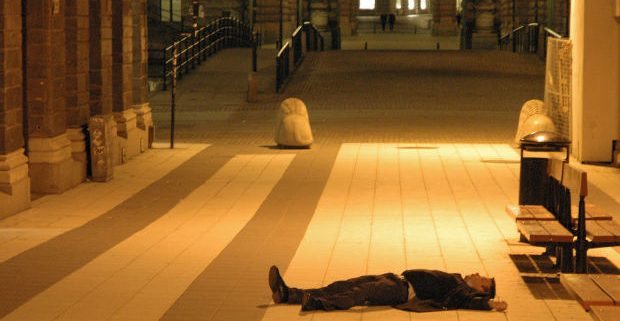 Corpus delicti, the main object of a crime. It’s proof that a crime has taken place. In the case of murder, the body is the corpus delicti, a detail that’s often the focus of mystery and crime fiction.

Writers go to great lengths to help the enthusiastic reader leave the comfort of their homes to accompany the protagonist as he or she embarks on a quest to solve a carefully plotted crime. And, during the writing process, writers sometimes travel a few feet past the expected “extra mile.” A step that sometimes lands them at the bottom of a freshly dug hole.

So let’s examine the dreaded “hole” and how not to write yourself into one. To begin, we’ll ask the feds to assist. Keep in mind that the hole mentioned below is the overwritten scene in your current WIP, the one your critique partners want you to revisit but you think is fine as is.

Ready? Okay, let’s take a brief walk into the woods where we see…

Now we must ask ourselves, how many federal agents does it take to look into a hole?

One to do the official looking.

One to observe the looker to be sure the civil rights of nearby squirrels aren’t violated.

One to video the event, confirming that no rights were violated and that the opening in the earth is indeed a hole.

One to collect samples of the void for laboratory analysis (eight scientists will later conduct tests that will confirm nothing was there).

One Assistant Agent in Charge to supervise the operation, call in air support and ground teams that include two dozen agents who’ll scour the forest for clues and to sample the surrounding air for possible matches to air found in the hole. The ASAC will also bring in a few number-crunchers who’ll begin a 12-year study about holes and their role in climate change and the fluctuation of the violent crime rate. A parallel study will examine holes and their significance in the extinction of the wooly mammoth. Homeland Security will also be called in to provide perimeter security and to install video and audio surveillance equipment to record any movement or increase in size of the hole, an act that could be related to terrorism. Seven heavily-armed drones are on standby.

Finally, the last team member is the Special Agent in Charge whose duty is to supervise the ASAC. The SAC will also appear on camera as the official spokesperson at all news conferences. The appearances will serve as a lead-up to running for political office.

Media sources catch wind of the investigation and run stories with headlines such as:

The president orders the Justice Department to investigate. The hole is invited to the White House for a beer and a private concert by Courtney Love and her former band, HOLE. The local police department is disbanded. Two senators are impeached. A no-fly zone is established over the area. Segregated safe spaces are created for all woodland creatures. An executive order was issued requiring all animals to pee behind the same tree. No one is permitted to say “Trump” or “Hillary.” The speech restriction is so stringent that one agent was suspended for two weeks without pay for saying,” This place is hilly.” Of course, the press ran with it, turning the phrase into, “FEDERAL AGENT BLAMES HILLARY FOR HOLE COVER UP.” A second headline read, “TRUMP TO BUILD WALL AROUND HOLE.”

All local universities and other schools are placed on indefinite lockdown. California residents, although 2,000 miles away, are ordered to shut off all water. CVS stores across the country are immediately evacuated in preparation for imminent destruction by fire. The National Guard surrounds all bird sanctuaries to prevent hostile takeovers. Bernie continues to promise free everything and Ted Cruz removes his Grandpa Munster mask and goes into hiding. Sarah Palin is speechless. It’s total and complete CHAOS!

Moral of the story? A hole is just a hole and it doesn’t take two pages of unnecessary words to describe it, unless you’re an employee of the federal government, in which case a 1,200 page report is acceptable as a first draft.

So write only what’s needed to further the story. Trim the excess and cut the fat. For example, a shortened version of the “hole” story:

Ralph Bumberner took a walk in the woods behind his house, searching for a place to bury his wife’s body. He came across a hole—six feet by four—but decided it was too close to the house and would be easy for police to find, especially the FBI agent who lived down the road, so he continued walking. He made a mental note of the location, though, so he wouldn’t stumble into the shallow pit while dragging Myrtle to her final resting place.

Elmore Leonard had this to say in 10 Rules of Writing.  – “My most important piece of advice to all you would-be writers: When you write, try to leave out all the parts readers skip.”

*No federal agents were harmed during the writing of this article. References to those brave law enforcement officials were purely tongue-in-cheek. Myrtle, however, didn’t make it.