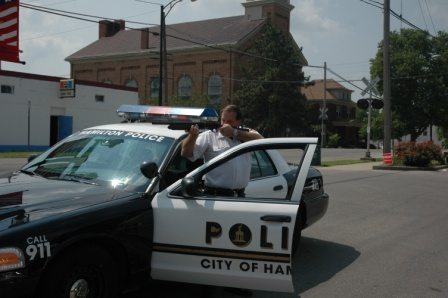 We’ve all experienced that moment of anxiety and apprehension when we look in our rear view mirrors and see a police car following closely behind. The sweating. The knot in the stomach. Not to mention the “what did I do’s” flashing though your mind like a slide slow on speed. Oh no, did I say speed? How fast was I going? They don’t give tickets for twenty miles-per-hour over the limit, do they?

No matter how fast or how slow you go, it’s there, in stealth mode, with headlights glowing like the eyes of a demon. The driver’s monster-size dark silhouette sits unwavering behind the wheel. You can’t see them, but you know the driver-creature’s eyes have met yours. It knows, and you know it knows. It has probed deep into your soul, the place where you keep all your dark secrets. Yes, it knows what what you’ve done and what you’re thinking. It knows you rolled through that intersection, brazenly ignoring the stop sign. And it knows about the day when the time had run out on the parking meter, but you threw caution to the wind and left your car there for ten extra minutes, slapping Big Brother in the face with your devil-may-care attitude. But you knew it is was only a matter of time.

Yes, IT is coming for you…

Okay, that’s a little overboard, but I think the feelings we get when we see a police car in our rear view mirrors are pretty darn intense. And all that intensity, anxiety, and trepidation often leads to trouble in the form of saying too much and doing all the wrong things at all the wrong times, especially when around persons of authority. And, no matter how calm and cool you think you are, this tongue-tangling often occurs when approached by police officers…even when we’ve done absolutely nothing wrong.

Well, let’s start with a few basics. First of all, if the officer is aiming a .12 gauge at you like Officer Crawford in the top photo, well, you should definitely obey any and all of his commands. That is not the time to argue.

1. Body language/mannerisms. It’s a good idea to not make any threatening gestures, like suddenly reaching into your pockets or suddenly placing a hand behind your back, unless you’ve been ordered to do so by the officer. Let’s face it, if you’re at the point when the officer has asked you to place your hands behind your back, most of what follows is moot.

2. What you say and how you say it. Arguing with the officer will earn you no favors. He/she wants the incident to be over and done as quickly and easily as possible. They don’t want to get hurt, nor do they want to hurt you. However, arguing automatically brings about a hostile atmosphere, and that puts the officer on guard. Therefore, simple acts that normally wouldn’t seem harmful suddenly become potential threats in the eyes of the officer. Besides, anything you say can and WILL be used against you in a…yada, yada, yada…

Also, asking to see the officer’s supervisor is a silly thing to say while you’re arguing with the officer because , if you’ve been hostile and combative you’re probably a matter of seconds away from meeting the supervisor and the four or five other officers who’re on the way to help arrest you.

4. When operating a motor vehicle. You ARE required to present your driver’s license and registration when asked. By the way, if you are arrested/detained, you are required, by law, to give the officer your correct name. Failure to do so could result in an additional charge against you.

8. If you are arrested and you ask for an attorney, that does not mean that a lawyer will drop what she’s doing and immediately drive over to the jail. It might be several hours, or even days, before you see a lawyer.

9. You will get a phone call (after arrest) but that doesn’t mean you’ll get to make that call the second you hit the jail floor. Booking and processing will probably be completed before you’re allowed to make the call. Sometimes, it’s hours before an officer has the time to get you to a phone. They have many other things going on, and bringing a telephone to a screaming, angry, blubbering drunk is not high on the to-do list.

By the way, it is not a constitutional right to make a cellphone call during your arrest. You’ll have to wait to call your mom, brother, father, sister, brother, Auntie Sue.

10. Use your common sense. And for goodness sake, while an officer is placed cuffs around your wrists don’t quote law and police procedure based on what you’ve seen on TV. Those made-for-your-viewing-pleasure scripted lines are rarely accurate. Besides, at that point the officer isn’t listening to you anyway. Instead, they’re concentrating on getting you to the jail or police department without either of you getting harmed. That’s the goal.

Remember, if you resist an arrest the officer is permitted to meet that resistance with whatever legal means it takes to overcome it. They can’t simply let people go because a suspect suddenly decides they don’t want to be arrested.

Finally, do not operate a riding lawnmower on the roadway, especially while drinking alcohol.