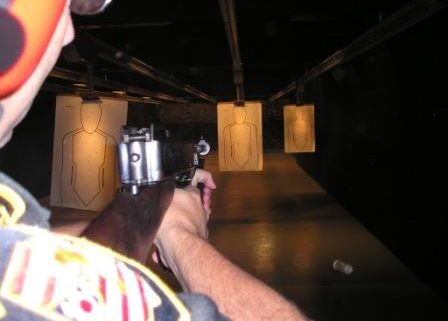 This is what it looks like to peer down-range from behind a Thompson fully-automatic submachine gun. You can actually see a spent cartridge ejecting at the lower right-hand side of the picture, just above the major’s right elbow.

The Thompson is an extremely heavy weapon that’s capable of firing 900 rounds of .45 caliber ammunition per minute, and let me tell you, that’s fast. The experience of firing one of these babies is like no other. I took this photo and was peppered with gunpowder during each burst of gunfire, even from the distance where I stood, which was as you see it. I didn’t use the zoom. We took this shot in a controlled situation while wearing full protective gear and employing other safety precautions. I say this because I don’t recommend this method of photography. It’s not safe. Gee, the things we do for book research.