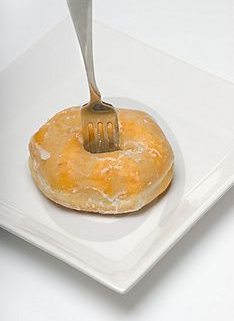 Well, it’s nearly done. Yep, it is almost time to stick a fork in it. And the 2011 Golden Donut Short Story Contest was a roaring success.

The rules were simple…write a story about the photo we supplied, using exactly 200 words. No more, no less. The task…not so simple. It’s pretty tough to pen a really good tale with so few words, especially a story complete with a beginning, middle, and ending. But, you guys met the challenge, which resulted in us receiving dozens of wonderful entries from writers all over the country.

The stories were all sent to a first-reader who is not associated with the Writers’ Police Academy. The first reader is, however, a professional editor and author. All entries were blind entries, meaning that the stories were sent without the author’s names. The only identifying marker was the number assigned to each entry.

The next step was to pick the top ten finalists, which the reader did, all while kicking and screaming, stating there were too many really good stories to narrow the field down to only ten. But, the top ten were finally selected and the list of ten numbers were returned. And, in no particular order, they are…

Her Self Worth – Travis Richardson

If These Floors Had Talked – Melinda Loomis

So, congratulations to the top ten finalists!

The step step in the process was to send the top ten picks to the contest judge, Kristen Weber. Many of you already know Kristen, especially if you’ve ever had a manuscript either accepted or rejected by her during her time as senior editor for Penguin’s New American Library (NAL) or Obsidian (imprint of NAL). Kristen was also in charge of NAL’s movie/television tie-in program and edited numerous original novels based on TV programs such as Burn Notice, The Unit, Criminal Minds, and Psych. She’s worked with well-known authors such as M. C. Beaton, Lindsey Davis, Margaret Maron, and Marcia Muller.

Needless to say, our 2011 judge knows her stuff. And she has selected this year’s top story.

But you’ll have to wait until next week at the Saturday night banquet to learn the name of the winner. The Golden Donut Award will also be presented to the winner at that time.

Again, congratulations, and good luck, to all the finalists.

And thanks to everyone who entered the contest. Your support is greatly appreciated.

See you all in a few days. Get plenty of rest between now and then. You’ll need it!