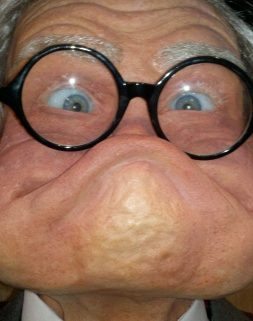 We recently took a short trip where I ran into a fellow who considers himself an expert on writing fiction. He’s also a retired police detective. The wise old gentleman wouldn’t tell me his name, asking that I refer to him as “The Professor.” He did share some of his writing tips with me. He also introduced me to the members of his close circle of friends, and you’ll meet them in the coming days. Anyway, here’s what The Professor (pictured above) had to say about the correlation between police officers and fictional character development.

The Professor – Police officers have unknowingly cornered the market on developing believable fictional characters. And, it’s something they do on a daily basis while interviewing witnesses to crimes. Their job is to help those witnesses reach deep into the corners of their minds, where they’ve stored details that help round out descriptions of suspects—scars, tattoos, a limp, a missing finger, an odd accent, a habit of throat clearing or twirling a lock of hair, a mole on the cheek, a distinct cologne, etc. The end result is a wonderfully detailed picture of a unique person who’d stand out in a crowd of dozens.

Writers have the same job, to develop characters with unique qualities and physical appearance. Writers must go a few steps further, though, showing readers the characters’ personalities, their strengths and flaws, and how they live their lives.

It’s best when writers introduce character traits through means other than like listing a string of grocery items—he was a tall, thin, bald, and nervous man. Instead, how about…

Andre ducked when he entered the bedroom, which, as with most pro basketball players, was something he was used to doing, in every single house he’d ever visited. Thankfully, the ceiling inside this particular room was vaulted. His slick scalp reflected the light from the overhead fixture, a human-powered lighthouse beacon.

Andre flashed a lopsided smile at his dying friend, exposing a set of teeth as bright as the keys on a new Steinway piano. He couldn’t find the right words to say to the man he’d known since childhood, so he stood at the foot of his friend’s deathbed, jingling the change in his pocket.

Sure, sometimes writers have a bit of difficulty bringing life to characters, so here are a couple of methods that might help out.

Pretend you’re sitting across the breakfast table from, say…this guy… 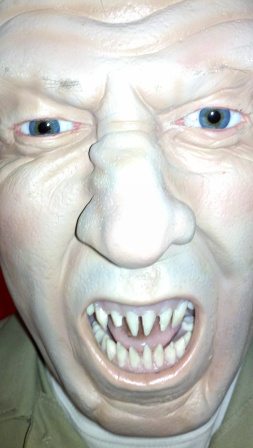 You want to know what makes this fellow tick. So you might want to start out the interview by asking…

1. Are you angry because you recently filed your teeth to sharp points and now you’re in excruciating pain?

2. What are your favorite foods?

4. Have you killed anyone else besides your mother and the ladies of the Afternoon Tea Club?

5. Do have any hobbies? Well, other than chopping people into tiny bits?

6. What is your deepest, darkest secret? I know you mentioned wanting to learn ballet, but I mean something you’re holding really deep down.

7. What’s your favorite color, other than blood red, that is?

9. What’s your favorite time of day? You know, when you’re most active doing whatever it is you do?

10. What is your most valued possession? No, I don’t mean the girl in the basement.

Once you’ve completed the interview, try asking your soon-to-be character if it’s okay if you have a quick look around the inside of his house (you may have to promise that you won’t call the police, or his shrink). During the quick tour of his charming abode, make note of the things you see. A character’s possessions will tell you a great deal about him.

1. Clothing – you see nothing but tattered and well-worn overalls and grungy work shirts. Now you know he’s probably a man who works with his hands. This could indicate someone who frequents honky-tonk bars and has friends who drive rusted and dented pickup trucks. A matchbook collection from various bars would also be a clue. So would a scrapbook containing locks of assorted hair colors and types, all labeled “Girls from bars I go to.”

Suits and ties = a man who works in an office setting, therefore he most likely pals around with the upper class people.

2. Your guy from the above photo might possess a backpack filled with human heads, and that could be a great clue about his hobbies and interests.

3. There may be a secret door in “pointy-teeth’s” bedroom that leads to a torture chamber. Now you know where he spends his weekends.

4. Are his things new, old, broken, or meticulously cared for?

5. If he were to take a trip, what would he pack to be certain all his needs would be met?

6. The very last question of your life might be, “Why do you keep your best cutlery locked in that bloodstained footlocker?

So, these are only a few examples of ways to squeeze important details from your characters. There are more tips on the way, featuring an unusual cast of characters. So please stay tuned…