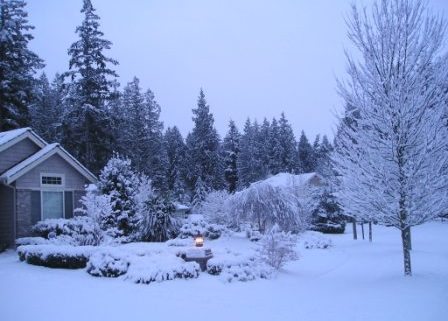 A few years ago our Christmas vacation took an odd and unexpected twist. First, we left fairly warm temperatures and sunny skies in coastal Georgia so we could spend some time at our house in North Carolina (near Mayberry, of course). Well, who would’ve expected that we’d be slammed with a pretty powerful winter storm, the same storm system that crippled much of the east coast. And who would’ve figured we’d have unexpected guests show up a little after midnight on our first night there.

Here’s what brought the middle-of-the-night guests to our snow-covered abode.

The snow was coming down quite heavily, and not only did it knock power out for several days, it placed a tremendous burden on the branches of several newly-planted evergreens in the backyard. The weight of the wet snow caused a few of the young trees to bend until their tops rested on the already white ground. And me, not wanting to lose either of those precious Deodar (Himalayan) Cedars, suited up and braved the cold and blowing snow to lend them a hand with their fight for survival. Sounds brave, but what I actually did was simply slip on a jacket, boots, and gloves, and venture out into the moonless night to shake the snow from their narrow branches (not so heroic after all, huh?). 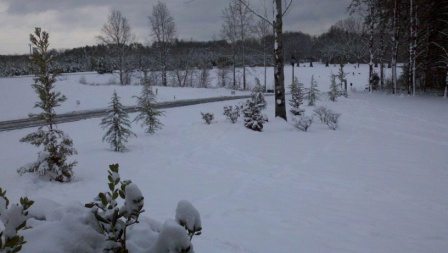 Since I was already outside I also decided to clear a “restroom” spot for the family poodle, and I brushed several inches of snow from the satellite dish. Then, with my chores complete, I headed back inside where I sat near the toasty-warm fireplace to work on an in-progress writing project (thankfully, we had a generator, the only one in our neighborhood).

*I’m a late-night writer, which may account for the many errors seen on this blog.

Anyway, I settled into a comfortable chair with my laptop and was deep into my work when the doorbell began to ring, quite relentlessly.

Remember, this was well after midnight during a heavy snowstorm when the roads were nearly impassible (our N.C. house was well into the depths of the county, situated in a lakeside community). Of course, my background immediately sent my cop-brain into overdrive. I began to think the worse.

Okay, it was late and I was really tired…

But, having lived the life of a trained observer and teacher of police officer safety and survival, I reverted back to my many years of training and did what any hyper-alert police officer would’ve done…I slowly and carefully peeked outside through the blinds to see who, or what, was ringing my bell so late at night.

I was surprised to see not one, but two snow-covered police vehicles idling in my driveway. I was also a little stunned to see that the officers had my house and yard brightly illuminated with their spotlights and takedown lights. AND they’d taken tactical positions around the house. The only thing missing was the bullhorn and the hostage negotiation team.

My first thought…hide the eggnog and rum cake. Second thought…put on something other than sleepwear. Third thought…Well, there was no third thought. I simply opened the door and stepped outside, in shorts, t-shirt, and with ten bare toes. It was around 25 degrees, so I slipped my hands into my pockets for a little warmth, leaving my toes to fend for themselves.

One of the officers, the one in charge, decided to approach me, cautiously. It was at this point when I realized they were awfully serious about something. A second officer—backup—walked up with his hand resting on his sidearm. I noticed the thumb break on his holster had been unsnapped.

His other hand gripped a can of pepperspray.

Very nice, polite officers. Both of them. Red-faced, buzz-cut, and full of “ready-for-any-and-all-action.” They were all about the business at hand.

Now, you tell me how you think the deputies handled this situation. Were their methods and questions appropriate? Did they ask enough questions? Too many? Were they safety-conscious? Anything wrong? Everything right? Here’s the basic conversation (questioning).

Officer #1 (speaking to me) – “Evening, sir. Wonder if you could tell me what you’re doing here?”

Me – “No, I live here, but we have a home in another state as well. We’re back and forth between the two.”

Amazed at his uncanny investigative/observation skills, I smiled, and then said, “No, I’m not.”

#2 – “You been outside tonight?” (Remember, I’d been out tending to the trees and to the doggy restroom, therefore, the yard was loaded with footprints in the snow).

#2 – “Someone called and said a black guy wearing a hoodie was walking around your house peeping in the windows. You seen anyone?”

Me – “No.” Tip…providing more information than what you’re asked can sometimes be the beginning of an all new black and white striped wardrobe.

#2 to #1 – “She must have seen him (a nod toward me) outside and thought it was someone else.” By the way, his use of the pronoun “she” let me know that it was one of my female neighbors who’d made the call to the sheriff’s office.

#1 uses his portable to call dispatch – “I’m talking to the homeowner. This is his house but he lives out of state and is in town here for a while. Everything’s 10-4.”

#1 to me – “Sorry we bothered you, but we have to check these things out. Have a good night.”

Me to #1 and #2 – “Thanks for coming out. Makes me feel good knowing you respond to these type of calls, especially since we’re not around all the time.” (I didn’t bother to tell him about our alarm system and the across-the-street neighbors who watched and checked the place like Pinkerton guards). And with head-nods and waves they turned their backs to me and walked to their patrol vehicles, leaving me standing barefoot on the front porch as they drove away. Shivering, with my hands still inside my pockets, I watched their taillights disappear around the curve.

The deputies, while extremely polite, left me with a few questions bouncing around inside my head. Anyone have an idea what those questions could be?

Would you have handled the call differently? If so, how?

Grasshoppers and Trained Monkeys: Our Wacky Government
Scroll to top