No, I’m not talking about the spirit world, or of zombies. I’m talking about how the living use a victim’s body to help determine the time and cause of death.

First, what happens when a person stops breathing and their heart ceases to beat? The skin begins to pale (pallor) and the muscles immediately begin to relax—all of them, which can produce some pretty unpleasant effects around the south end of the body.

Then come the Mortis brothers, all three of them—Livor, Algor, and Rigor. These guys show up to the party, one at a time, and when they arrive … well, let’s just say the host is the center of their attention. And boy do they ever “spoil” him. 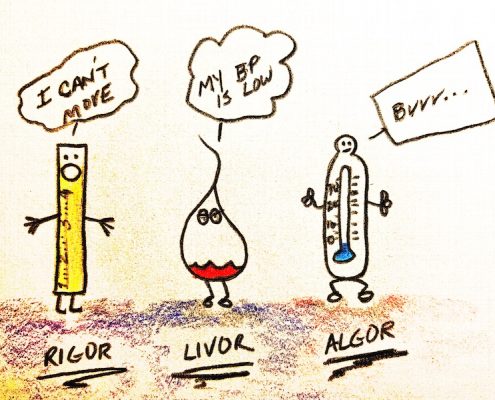 Algor mortis is simply the cooling down of the body after death. A pretty good  method to determine the time of death is to take the rectal temperature of the deceased (#neverusethethumb, for obvious reasons—say NO to the rule of thumb!), subtract that number from 98.6 (average, normal human body temp), and then divide that number by 1.5 (the average cooling rate of a body per hour under average conditions). The result is the approximate number of hours that have passed since the victim kicked the bucket.

Livor Mortis, or lividity, is the pooling of blood in the lowest portions of the body. Lividity is caused by gravity and begins immediately after death. The telltale signs of livor mortis, the purplish discoloration of the skin, begins the moment the heart stops pumping. This process continues for approximately 6-12 hours, depending upon surrounding conditions, until it becomes fixed, permanently staining the tissue in the lowest parts of the body. When large areas become engorged with lividity, the capillaries in those areas sometimes rupture causing what’s known as Tardieu spots. Tardieu spots present as round, brownish blacks spots. 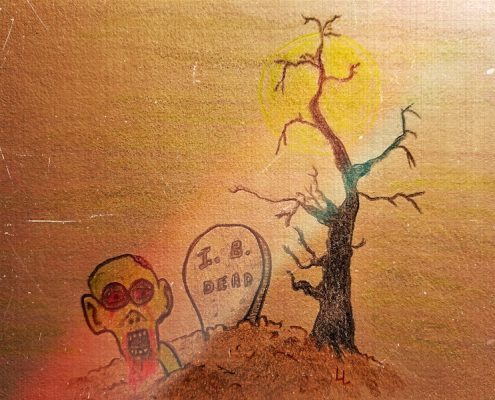 Rigor Mortis, the contracting and stiffening of the muscles after death, takes a couple of hours to begin and completes in approximately 8-12 hours. The process starts in the smaller muscles of the head and face and moves downward to the larger muscles. When rigor is complete, the process reverses itself starting with the lower large muscles and ending with the smaller face and head muscles. The entire process can last for approximately 48 hours. The body will quickly begin to decompose after rigor is complete.

A person’s body goes stiff in the position they were in at the time of death. 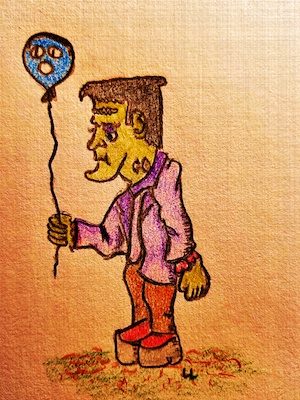 Therefore, if a person died while lying on his back with one arm held straight up and the other straight out to the side, and the police discovered that same body in a bathtub, they’d probably conclude that someone moved the victim after death had occurred. After all, no one sits in a bathtub with their arms in those types of positions … do they? By the way, cops should not automatically rule out things simply because they’re different. Still, in the bathtub with one hand aimed skyward and the other pointing to a tube of Preparation H, a clump of tangled bobby pins, and a tin of ear wax remover. Yeah, somebody moved this one.

– Rigor mortis can cause contraction of the muscles in the epidermis, which also causes goose bumps to appear.

– Hair and fingernails do not continue to grow after someone dies. The skin around them begins to recede after death, which gives the appearance that they’re still growing.

– Age, illness, ambient temperature, fat distribution, and physical exertion just prior to death can all affect the rate of rigor mortis. 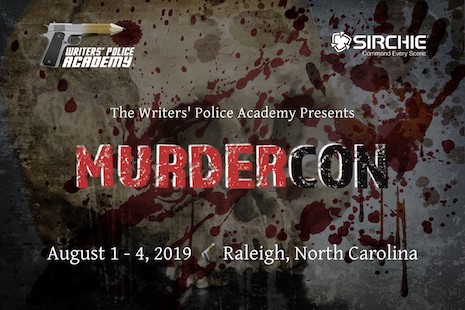 The Writers’ Police Academy’s super-special event, MurderCon, features actual homicide investigation sessions in a first-ever, rare opportunity offered to writers. The material and venue are typically for law enforcement eyes only! For example … 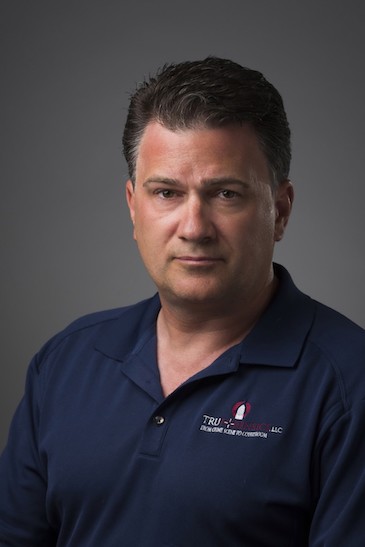 This workshop deeply delves into Cause, Manner, and Mechanisms of death, Coroner vs. Medical Examiner systems, differences in legal terminology for murder, homicide, and manslaughter, as well as, the realities in death investigations that are equivocal in nature.

Physical, testimonial, and circumstantial evidence as introduced into the courtroom will be applied to death investigations. A case study of a very unique and rarely-seen murder by hanging, and the forensic evidence obtained from the physical autopsy will be presented during this detailed workshop. This presentation is a rare behind the scenes look and discussion of psychological autopsies, and when they are utilized in criminal investigations.

David Pauly retired from The U.S. Army Criminal Investigation Command as a Special Agent-in-Charge/Commander and Forensic Science Officer. He performed duties in over a dozen states, and frequently worked with local, state, and federal agencies. He also performed duties in Panama, South Korea, Afghanistan, Haiti, Kuwait, Saudi Arabia, Israel, Turkey, Sinai, Egypt, Canada, Guam, and Nigeria. He holds a Master of Forensic Science degree from The George Washington University and is currently the Director of Applied Forensic Science at Methodist University, Fayetteville, NC. 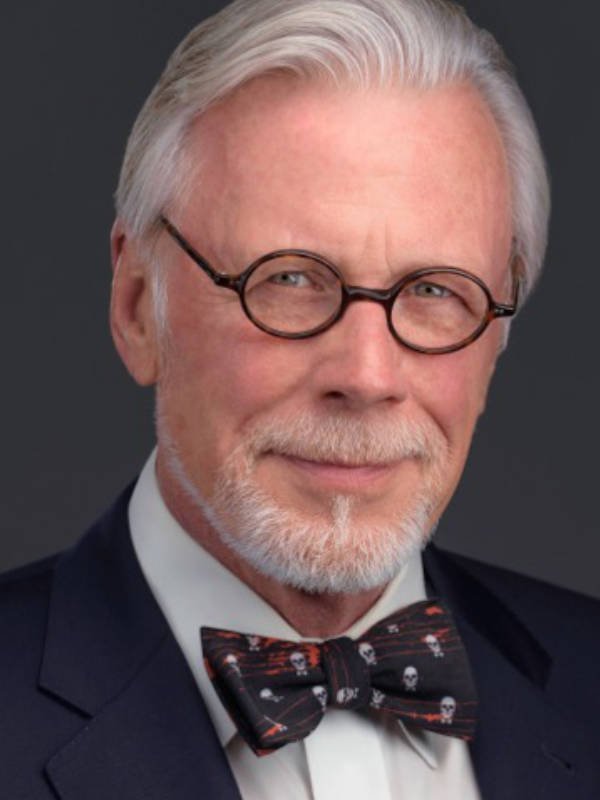 star and host of the Investigation Discovery (ID) channel’s TV series, THE CORONER: I SPEAK FOR THE DEAD, now in its second season.

Over the last 35 years Graham has written and lectured on grief and loss recovery to the medical community, hospice groups and loss recovery organizations. He is also a motivational speaker for students and troubled youth who are trying to get control of their lives through a speech entitled “Doors.” Graham’s upcoming book explores improving the relationship between forensic evidence collection and organ tissue donation. His case studies are featured on the Investigation Discovery (ID) channel in THE CORONER: I SPEAK FOR THE DEAD, now in its second season.

Graham has served as the Dauphin County Pennsylvania Coroner since 1990. During his time there, he has supervised investigations of over 600 homicide cases, supervised the certification of over 13,000 deaths. He has also supervised the Forensic Science Internship Program for over six colleges and universities.

Graham is the president of  the La Voz Latina Central, a bilingual newspaper serving six Central PA counties. He has been the president for the past seventeen years.

He grew up above a funeral home, with his father being the founder and owner of the Hetrick Funeral home in Harrisburg, Pa. and, from 1975 – 2003, Graham held the position of President and CEO of the family business, where he managed operations and developed after-care programs. The Hetrick Funeral Home is one of the first funeral establishments in Pennsylvania  to introduce funeral prearrangement.

In 2013, Graham was co-developer and consultant for Graham of Evidence, a TV pilot produced by A&E.