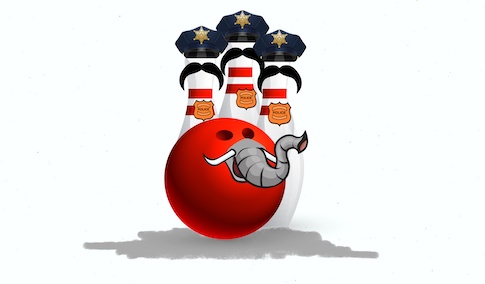 Graveyard shift—those eight long and often mind-numbing hours between midnight and the time your relief signs on to take over your beat. It’s boring. It’s exciting. It’s sleep-depriving. And it’s getting dressed while everyone else in your household is undressing, putting on pajamas, and crawling between the sheets for a good night’s rest in a set and toasty-warm bed.

Speaking of getting dressed … there’s a daily ritual for cops—shower and shave, slip on underwear and t-shirt—rookies will quickly learn that it’s best to put on their socks at this point. You’ll see why in a moment. It’s also important to note that not all officers shave as part of the daily routine. Some simply don’t need to. For example, my wife, if she’d chosen to become a police officer instead of a scientist, would have the luxury of skipping this step.

Next comes the vest. You’ve left the upper Velcro straps in place to allow you to slip the entire contraption over your head like a 7lb sweater. So over the head it goes, followed by pulling the side straps taut and securing them in place. Of course, you never get it right the first time, so you riiiiipp the Velcro loose and do it again and again until the fit is just right.

Time for the pants. Out of necessity, you’ve placed them in a spot that doesn’t doesn’t require bending too far, because the vest has already limited your movements just a bit. Now, tuck the tails of the vest inside the waist band of the pants and thread a belt through the loops so your pants won’t fall down. Goodness knows, once you’re fully dressed it would require a huge effort to reach ALL the way to your ankles to pull your pants up again (now do you understand the socks issue?). 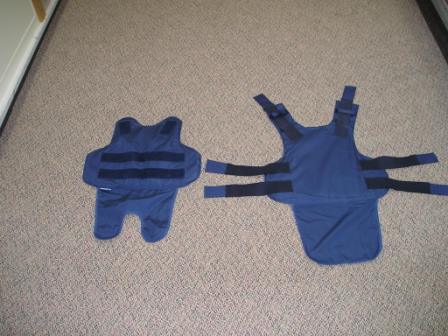 Front and rear vest panels. The top two straps on the rear panel are often left attached to the front panel to allow slipping the entire vest over the head like a sweater, or t-shirt. The material at the bottom of each panel is tucked into the pants like a shirt tail. Obviously, the front panel (with the “U” shaped cutout) is for the “convenience” of male wearers during a trip to the restroom. Use your imaginations to determine the need for the opening in the material. 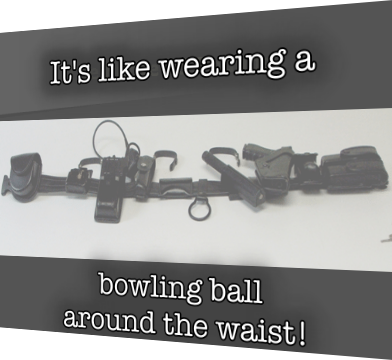 Next comes the duty belt/utility belt, with all its bells and whistles already in place. And yes, it’s heavy. Imagine strapping a bowling ball to your waist each day prior to heading off to work.

Without belt keepers, the thin straps made of leather or nylon with snap closures, the duty belt would easily and quickly fall down to your ankles, especially when running/chasing someone through a dark alley. Embarrassing, right? 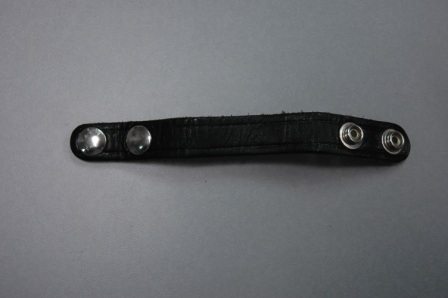 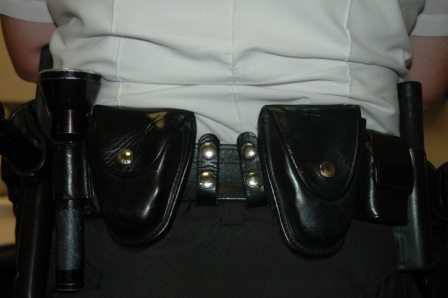 Time to go to work, and by now everyone in the house is already asleep. So you tip-toe to the back door, with leather squeaking, keys jingling, and Velcro crackling all the way.

Outside, the neighborhood is pitch-dark, and still with the exceptions of a lone cricket chirping in the backyard and the owl who hooty-hoots at random times throughout the night.

The only lights on are a streetlamp at the corner and the sliver of yellow slicing through the narrow opening of the curtains at the front window in the house across the street, where you know the widow Jones is peeking outside. Tomorrow morning she’ll be there again so she can report to the rest of the neighborhood what time you went to work and what time you returned home. After all, they pay your salary and Mrs. Jones is not at all shy about reminding you of it, either.

Time to get into the car so you unlock the door, open it quietly, and then gently slide into the seat. I say gently, because if there’s even a tiny bit of love handle at your waist, that soft, floppy flesh will be severely pinched between the bottom edge of the Kevlar vest and the top edge of the duty belt somewhere near the pepper spray canister or your sidearm—a real eye-opening, tear-inducing way to start the shift.

You take care to gently close the door. Again, I say gently but this time it’s because  without fail, the sound of the door slamming shut causes the eruption of a cacophonous symphony of varying tones and pitches of yips, yaps, and howls from dozens of hyper-alert dogs, all from within a three block radius. 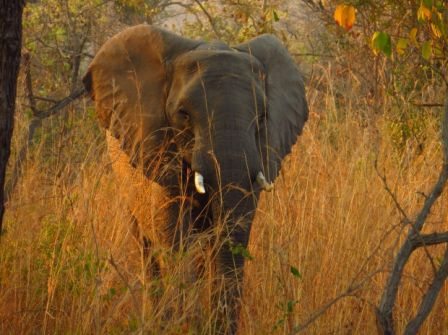