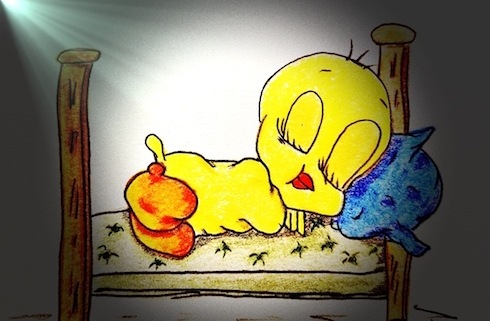 The first few hours of the shift were filled with the usuals—he-said-she-said arguments, drunks up to their typical drunken stupidity, Toms peeping, and crooks doing crooked things. But now it’s four in the morning and things have become quiet. Too quiet.

So serene, actually, that fatigue slowly gains control of your eyelids. It’s a subtle move, like grasping the string on your grandmother’s window shades, slowly tugging them downward. The Sandman’s gentle action is so gracefully executed and so well-choreographed that even your advanced investigative skills are unable to detect the hostile takeover.

Thoughts of your family occupy your mind–little Susie and Jimmie and your loving wife of eighteen years, Mollie Jean—asleep in their warm beds, with images of them nestled between clean and fresh-smelling sheets with heads resting on downy pillows and with soft covers pulled to their chins. Claude, your faithful black lab, named, of course, after the the painter, Monet, snoozes on the oval braided rug near the front door so he can hear when your car pulls into the driveway.

Five minutes. That’s all you need. Then you’d be as fresh as a springtime daisy.

Guiding your black and white onto the side street between the U-Nailem Hardware Store and Harry’s Barber Shop, you next steer the car into a long and narrow alleyway, the one behind Bert’s Breads and Cakes, hoping to find a quiet and dimly-lit place to pull over. Five minutes. Just five measly minutes.

Shouldn’t have spent those three hours today playing with the kids when you could’ve been sleeping. Still, that’s the only time you get to see them awake. And, someone had to mow the lawn this afternoon, right? The grass was already knee-high to a baby giraffe.

Oh, yeah, tomorrow is the day you’re supposed to go to your third-grader’s class to tell them about police officers. How long could it take? One or two hours at the most, right? Well, there is the lunch afterward. Another hour. After all, you’d promised. Besides, it’s impossible to say no to those sweet brown eyes and minus-one-tooth smile.

Your headlights wash over the back of the alley as feral dogs and cats scramble out of the dumpster that sits behind the bakery like an old and tired dinosaur waiting for extinction. The knot of animals scatter loaves of two-day-old bread in their haste to escape the human intruder who dared meddle with their nocturnal feeding. A speckled mutt with three legs hobbled behind a rusty air conditioning unit, dragging a long, dirty bag filled with crumbled bagels.

You move on, shining your spotlight at the rear doors of a five and dime, an auto parts store, a pawn shop, and the real estate office you used when buying your house. Only twenty more years to financial freedom and six more before experiencing the joy of seeing the first AARP invitation-to-join letter in the mail.

The night air is damp with fog, dew, and city sweat that reeks of gasoline and sour garbage.

Tendrils of steam rise slowly from storm drains—ghostly, sinewy figures melting into the black sky. Mannequins stare into infinity from tombs of storefront glass, waiting for daylight to take away the flashing neon lights that reflect from their plaster skin.

Four more hours and you’d be at home, in your own soft and warm bed.

Desperate to close your own eyes, just for a minute or two, you park at the rear of the next alley, below a grouping of the upstairs, low-rent apartments of the city’s less fortunate citizens. Your choice of nap space is alongside a stack of flattened cardboard boxes and crumpled bags filled with the evidence of someone’s life for the week—chicken bones, dirty, disposable diapers, wilted lettuce leaves, cigarette butts and ashes, and empty bottles of two-dollar wine.

Placing the strip of black electrical tape over the FM radio dial light, the one you keep stuck to the dashboard to block the glaring light, you turn up the volume on the police radio, just in case, and you close your tired eyes and then take a deep breath and slowly exhale. Ahhh … Just what the doctor ordered.

Suddenly, a voice spews from the speaker behind your head, “Shots fired! Respond to 1313 Mockingbird Lane. Back up is en route.”

You quickly grab the radio mic and say …

Working the dreaded graveyard shift is bad enough as it is, but when you add the extra stress of working it alone, well, then it sometimes becomes downright dangerous. But I’ve done it and so have many police officers across the country who work in small towns and counties. In my case it was a county—my first law enforcement assignment—and the land area wasn’t all that small. But, our sheriff had his way of running things and no one was brave enough to contradict the larger than life man behind the curtain. So working alone it was.

Often, working the midnight shift is slow and lonely, especially after 2 a.m. (10 p.m. – 2 a.m. are the action hours, usually). You spend your late-night patrol time fighting sleep while listening to anything you can find on the radio. Even AM radio farm reports about the latest hog feed options or manure spreading techniques are better than total silence.

Then there’s the constant battle with that mandatory piece of equipment worn by all graveyard shift officers—the invisible string attached to the eyelids, the one that attempts to yank them down much like pulling the cord on grandma’s old-time window shades. By the way, the force generated by the eyelid-string-pull is somewhere in the range of three times the earth’s gravitational pull.

So you’re out there in the wee hours along with packs of feral dogs and cats and raccoons who, for their tasty evening meals, raid garbage cans and dumpsters. A drive along a town’s main street reveals back-lit mannequins—some headless and handless—standing watch in storefront windows, the only objects remotely resembling another human.

Wispy tendrils of steam rise out of the storm drains, twisting and winding their way upward toward the black sky. Out in the county, your spotlight reveals “things” hiding between silos and tractor sheds that may or may not be there. Only your mind knows for sure … sort of.

Images of a nice, warm, soft bed and pillow play on a never-ending loop inside your mind.

But there are some moments of excitement and action that  and working an entire county alone poses some interesting problems … like getting to a crime scene before your shift ends in four hours.

The trip across our county from east to west, with blue lights and siren wailing and flashing ,respectively, and gas pedal to the floor, was 30 minutes or so. That’s nonstop as the crow flies. North to south was even further. Much further. Diagonally, though, if a deputy was patrolling in the far southwest corner and received a call in the far northeast, well, let’s just say that we hoped the complainant knew how to shoot or had a pack of viscous attack dogs handy, because we’d have to stop for gas twice and to pull over at least once to enjoy a bag lunch before we’d reach the location.

And that’s if our radios were capable of receiving a signal in the deepest, darkest corners of the county. To make matters worse, since interstates do not run diagonally, that meant dodging deer, ‘possums, and and other critters, maybe even an occasional cow who’d slipped through a broken fence, while traveling on winding and roller-coaster-like country roads for a good portion of the trip.

Daytime shifts in rural areas present their own challenges. You know, like when you’re running full lights and sirens because someone has just been shot, and suddenly find yourself behind a large farm tractor pulling some sort of bright green farm machinery that covering the entire roadway and both shoulders? And, of course, Bubba Jenkins is chattering away on his CB radio while scooting along at a breath-taking 4 miles-per-hour. He can’t hear your siren over the roar of the equipment and he never, not ever, turns around to see what’s behind.

So you’re left with no choice but to find a shallow spot in the ditch and crash through it sending everything inside your car flying—coffee cup under the brake pedal, papers on the dashboard, handcuffs under the seat and, well, you get the idea. Then you plow through an acre or so of corn in order to pass the plaid-shirted tobacco-chewer who turned and spat a nice wad through your open window just as you finally made your way past his mammoth tires.

Then, to top off the trip, you arrive at the scene, a grassless front yard littered with empty beer cans, used diapers, a couple of tractor tires painted white and filled with half-dead pansies, and a Ford engine block with four-foot weeds growing up and through the cylinder block. There, you discover an entire family, along with several shirtless friends, fighting like they’re the feature “act” in one of those ridiculous TV wresting matches. And, they’ve chosen large hunting knives as their weapons du jour.

So you yell out, “Junior!” at the top of your lungs, knowing that at least half of the crew will stop fighting long enough to see who’s calling their given names (Yes, I knew a man whose actual, honest-to-goodness name was Junior. And, of course, his son was … wait for it … Junior, Jr).

The name-yelling was sometimes enough to scatter the ones who had outstanding warrants or who were parole or probation violators. Then you could arrest the remaining half-dozen, or so. Of course, first you’d have to stand toe-to-toe and argue with the wives of each of the offenders, and you don’t want to arrest them because each one has at least one snotty-nosed diaper-wearing kid hanging from a hip. And there’s always a one-eyed, three-legged dog named Bear or Blue or Lucky nipping at your ankles during this entire mess.

Just as you’re about to ratchet the cuffs on the largest of the suspects (if you only have one pair of cuffs, always handcuff the behemoth who’s most likely the one who could inflict the most amount of pain on your already battered and tired body), your radio crackles…”Shots fired … unintelligible …. at the unintelligible … use … unintelligible … 10-4?”

“Automobile crash at the intersection of …”

And so it goes … hoping you’ll reach the crash scene before daylight, because it occurred at the far top corner of the county, the area you just left 30 minutes ago.