Much has been said during the past few days about the Broward County sheriff’s deputy, Deputy Scot Peterson (not to be confused with the Scott Peterson who’s currently serving time on death row for murdering his wife and their unborn child), the sworn law enforcement officer who was there but failed to enter the Marjory Stoneman Douglas High School in Parkland, Florida, on February 14.

Peterson was assigned to the school. It was his permanent post. He was there to safeguard children. It was his job. He was in uniform wearing a sheriff’s badge and a gun. He absolutely was the ONLY barrier between a killer and his helpless victims. And Peterson failed.

It has also been reported that additional deputies arrived on the scene and they, too, took positions outside the school—behind their patrol cars. It was not until local city police arrived that any law enforcement officer entered the school. A couple of new deputies arrived and joined the local city officers when they went inside to engage the shooter. Why the others elected to hunker down behind their vehicles and stay there throughout is a mystery to me.

Let me say that again to allow it to sink in—the others, the deputies who first arrived and were hiding, remained outside. I simply cannot wrap my brain around this scenario.

I must say, this is not first-hand knowledge. I’m merely piecing together reports from various “news” articles. Most of them differ so actual fact-gathering is not totally reliable. Still …

Many are calling ex-deputy Peterson a coward (he was suspended without pay and then resigned).

Personally, I can’t outright call the man a coward because I wasn’t there on that horrific day, nor am I privy to his thoughts. Actually, none of us have a clue what went through Peterson’s mind as he hid outside while gunfire echoed throughout the school hallways, mingling with the screams of the terrified, helpless kids.

Something had to be going through his mind, right? Was it the faces of the students he interacted with on a daily basis? Teachers? Was he imagining them peppered with the blood of their fellow students and educators? Or was he thinking of how to make it home alive? Or? Or? Or? What was he thinking???? For goodness sake, Deputy Peterson knew these kids and their teachers. He. Knew. Them. He saw them on a daily basis. They trusted him to keep them safe.

Many things take place during events that frighten us, and some people are able to continue to function, even if only through the rush of adrenaline, while others freeze. Who knows, Peterson may suffer from PTSD sparked by an earlier trauma. Maybe he thought he’d be able to nab the shooter on his way outside. Or, perhaps he was hoping the killer would commit suicide. And then there’s that whole “coward” possibility.

In all fairness to Peterson, I’ve seen officers freeze when faced with deadly situations. I’ve even seen officers hide from danger, leaving their coworkers and citizens to fend for themselves. However, neither of those folks are officers today. They, with a bit of “gentle persuasion” moved on to other more suitable careers.

Working as a police officer is a tough job. I know, many people dislike cops, but the majority of officers would not hesitate to place themselves between you and danger. And they’d darn sure do whatever it takes to protect a child.

I remember breaking the glass on a bedroom window to pull a child to safety as his father fired at us with a shotgun. I’ve pulled a child from a burning car. I’ve witnessed officers doing remarkable things to save and protect others. They face gunfire, knives, and brutal beatings, but they continue to do what they do. 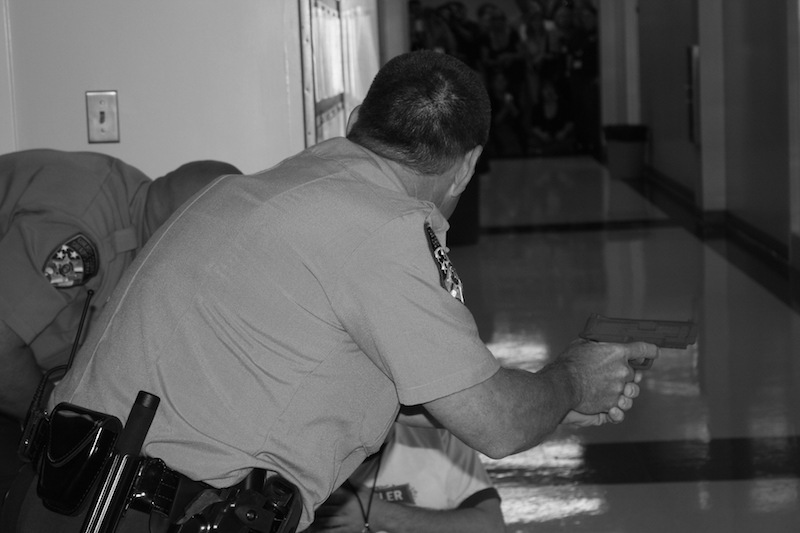 Most police officers responding to an active shooter are trained in a procedure often called Rapid Deployment, or something similar, meaning they proceed immediately to the area in which shots were last heard. The purpose? To stop the shooting as quickly as possible. 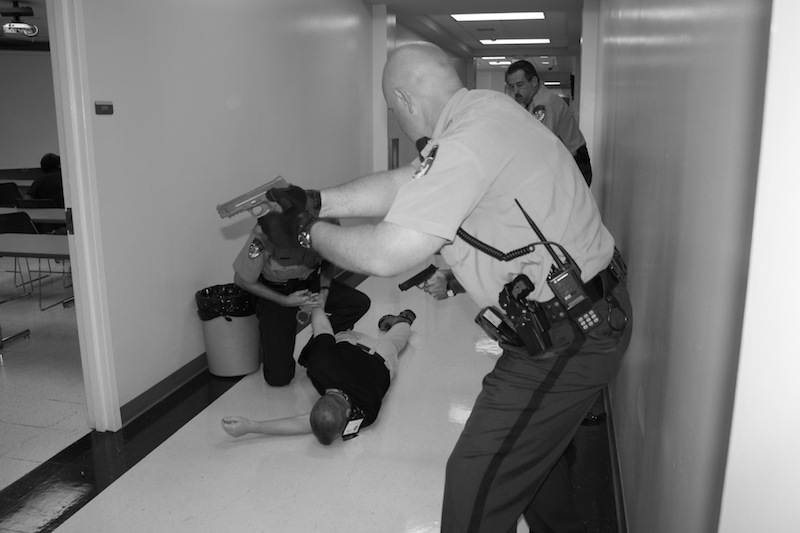 For example, the UW Madison, Wi. Police Department guideline for responding officers is quite clear. While the wording may differ slightly, this is the typical procedure throughout the country.

WHAT TO EXPECT FROM RESPONDING POLICE OFFICERS

Police officers responding to an active shooter are trained to proceed immediately to the area in which shots were last heard in order to stop the shooting as quickly as possible. The first responding officers may be in teams; they may be dressed in normal patrol uniforms, or they may be wearing external ballistic vests and Kevlar helmets or other tactical gear. The officers may be armed with rifles, shotguns or handguns. Expect to see different uniforms and/or plainclothes officers, as units might be deployed from different departments.

Do exactly as the officers instruct. The first responding officers will be focused on stopping the active shooter and creating a safe environment for medical assistance to be brought in to aid the injured.

The objectives of responding police officers are:

Officers will take command of the situation by shouting orders and/or physically directing individuals to a safe place or the ground. 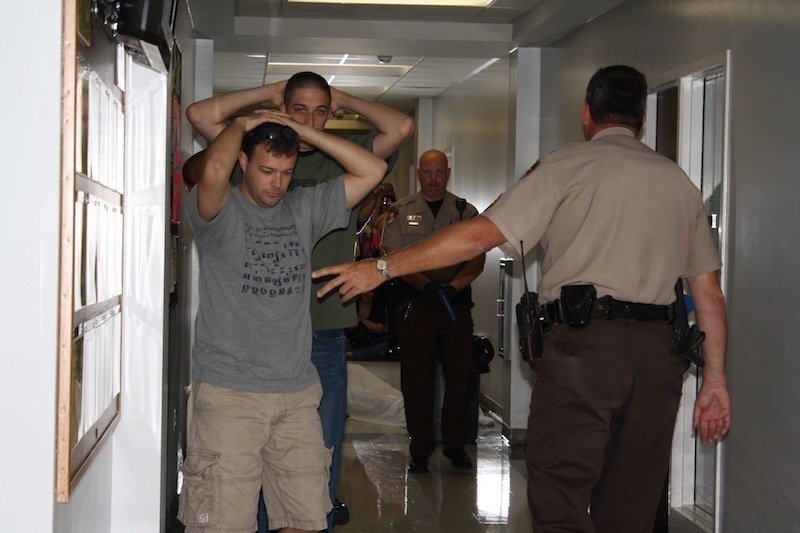 “The first officers to arrive to the scene will not stop to help injured persons. Expect rescue teams comprised of additional officers and emergency medical personnel to follow the initial officers. These rescue teams will treat and remove any injured persons. They may also call upon able-bodied individuals to assist in removing the wounded from the premises.”

Peterson and the other deputies who took cover outside a building where they knew kids were most likely being slaughtered just mere feet from them … well, that’s something as a cop, as a father, as a human, I simply could not do. Nor could I live in peace if I did. To not try to help in some way would haunt me forever.

I’m old, tired, and out of shape

As I stated on someone’s Facebook post yesterday, “I’m old, tired, and out of shape, but but my old, tired, out of shape butt would’ve gone inside that school. No doubt.” 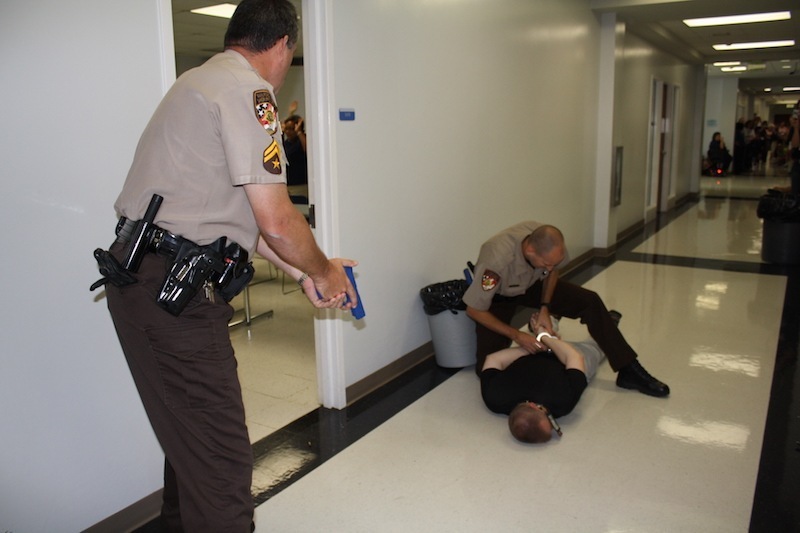 All photos are from Writers’ Police Academy active shooter training. 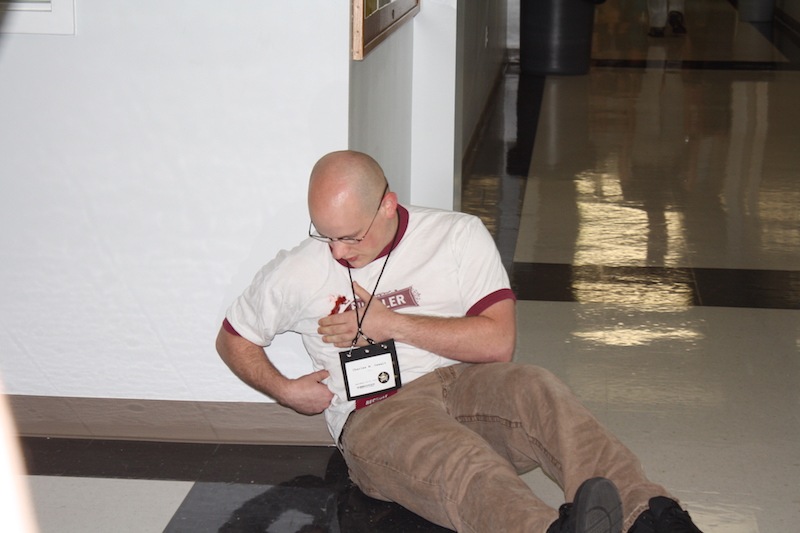 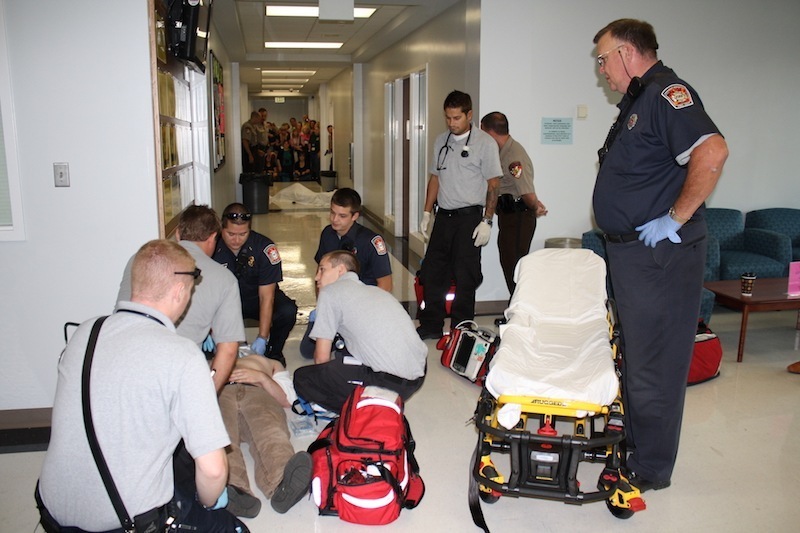 EMS arrived to treat the victim of a gunshot wound. 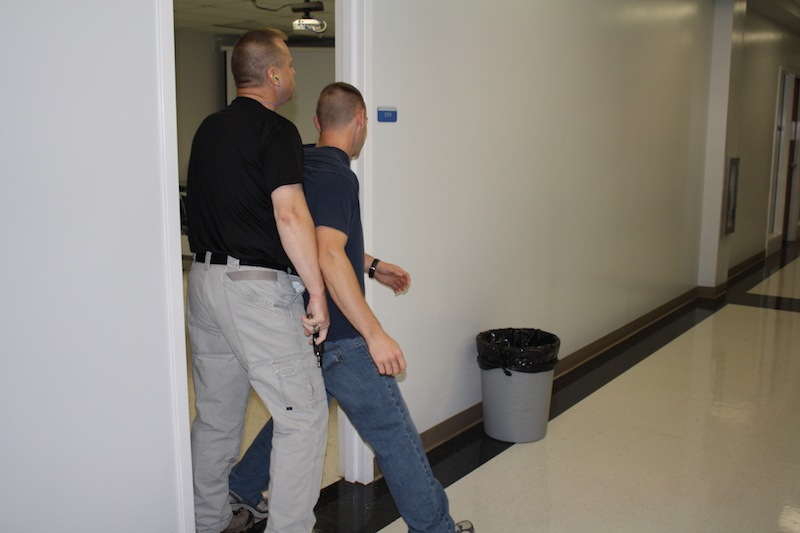 The shooter took a hostage and retreated into a classroom occupied by several students. 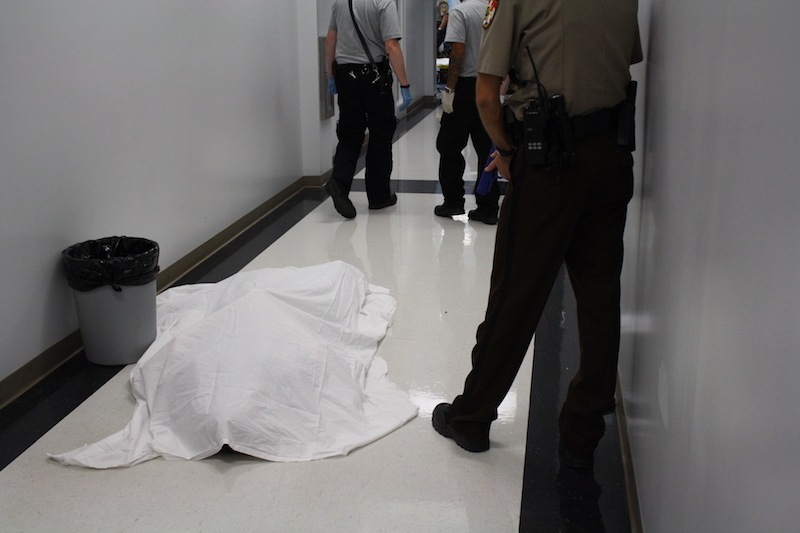 The shooter elected to engage responding officers, officers who IMMEDIATELY entered the school the moment they arrived. The bad guy did not survive.

The deputies’ purpose for such a rapid entry … to immediately engage or contain the active shooter(s) in order to stop the life-threatening behavior.

The scenario depicted in the photos above was entirely staged—make-believe—but that didn’t stop the action from seeming incredibly realistic. And yes, there was gunfire. The Writers’ Police Academy offers realism and actual police training. By the way, spots still remain available at the 2018 Writers’ Police Academy. It is THE event of the year! #2018WPA