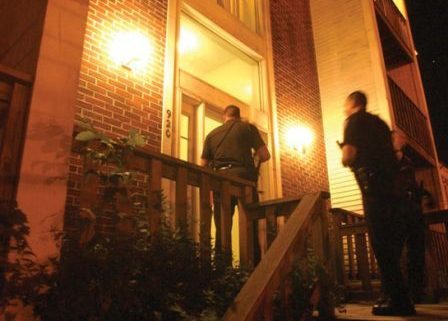 It was 9 p.m. when Detective Rudy Smith left the scene of a homicide where Carl Jackson, the father of two small children and husband of a loving wife, had gone to the store to pick up a gallon of milk for morning cereal when he was caught in the crossfire between two rival gang members.

Jackson was killed instantly by the barrage of bullets that pierced his flesh, striking more than one vital organ. It was all over in mere seconds. Luckily, a passerby saw the whole thing and, with his testimony, the police were able to arrest the suspects within hours of the tragic killing.

Detective Smith, a career officer with two adult children, five grandchildren, and a wife who still baked homemade biscuits for Sunday lunches with the entire family, had the unpleasant task of delivering the bad news to the murder victim’s family.

While at the crime scene he’d located the victim”s wallet, pulled the ID, and scribbled the dead man’s address on a page of the pocket spiral notebook the detective carried in his shirt pocket.  He’d inserted one of those books into his shirt pocket immediately after strapping his sidearm to his belt, each day for the past twenty-five years. They were miniature files that contained the details of precisely 307 murders … well, 308 counting the unfortunate demise of Mr. Carl Jackson of 3245 River Rd in Nightshade, Delaware.

Within a few minutes of leaving the scene of the homicide, Detective Smith parked his unmarked car in front of a small brick rancher on the east side of town. He switched off the ignition and waited for the headlamps to click off before calling in his location. He used the time to search his mind for the right words and how to say them.

The house was well lit and the driveway littered with plastic kid toys. A girl’s bicycle leaned against a chain-link fence that separated the lawn from the concrete pavement. The blueish glow flickering behind a front window indicated that the TV was on. It’s Wednesday night. Maybe they’re watching the remaining eight American Idol contestants croon their way toward the final prize. Someone on that Hollywood stage would go home. Carl Jackson would not.

Detective Smith stepped out of the car, hitched up on his holster, and headed for the front door. He took his time walking up the three brick steps before slowly reaching for the brass knocker.

She was young with short curly brown hair. A plain black t-shirt and faded jeans. No shoes. She held a little boy on one hip. A mini version of her, a tiny girl no more than four or five, clung to the woman’s right leg. “Somewhere Over The Rainbow,” the newer version of the song, blared through the cheap surround system in the next room.

A small dog yipped and yapped from behind a baby gate that separated the kitchen from the hallway. The animal’s nails clicked and clacked against the linoleum floor-covering, as the canine wildly twirled in circles, a frantic action that sent small foamy globs of spittle flying from its mouth, in all directions. It obviously wasn’t thrilled about having a stranger in its domain.

The woman smiled at first. But she knew. They almost always know. Then the smile fades and the trembling begins.

Detective Smith had seen it all before, many times. And each time the familiar lump formed in his throat. But he can’t allow himself to become outwardly emotional. It’s part of the job and he must be strong.

She cried, like the one before her and the one before her. The detective led her to the living room where she had a seat on the couch while he located the remote and switched off the TV, stopping Ryan Seacrest from announcing the singers who’d wound up  as the bottom three contestants.

Smith sat in a chair across from the woman who looked as if she’d aged ten years within the last fifteen minutes. He leaned forward, resting his elbows on his knees, and then he told her …

The tiny girl bawled because her mother was crying. The little boy needed changing, so he cried. And the dog continued to spin and bark and growl.

The woman, well, she had a funeral to plan.

Registration to the Writers’ Police Academy special event, Virtual MurderCon, is scheduled to end at midnight, July, 31, 2020. However, registration will close when all spots are filled, and it certainly looks like the event will indeed sell out any day now.

Again, this is a rare opportunity for writers to participate in virtual, live and interactive, “for law enforcement eyes only” training.

This incredibly detailed, cutting-edge instruction has never before been available to writers, anywhere. Until now.