If I had a quarter for every time I’ve heard or read a tired old cliché about the FBI v. local police departments, well, I’d be the proud owner of all my wants and desires (material things) with the entire kit and caboodle paid for in coins. You know the ones, and maybe you’ve used them in one or more of your own tall tales (It hope not). After all, there are so many and they’re tossed about in fiction about as often as words ending in “ly” unnecessarily and tragically appear in some stories.

There’s no good excuse for using these  threadbare, boilerplate, absolutely false, rubber-stamped, buzzwordesque, and  overused phrases, because the correct information is no further than a mere keyboard click away. Yet we see and hear these same old exhausting tunes everywhere!

So, where to begin? How about … 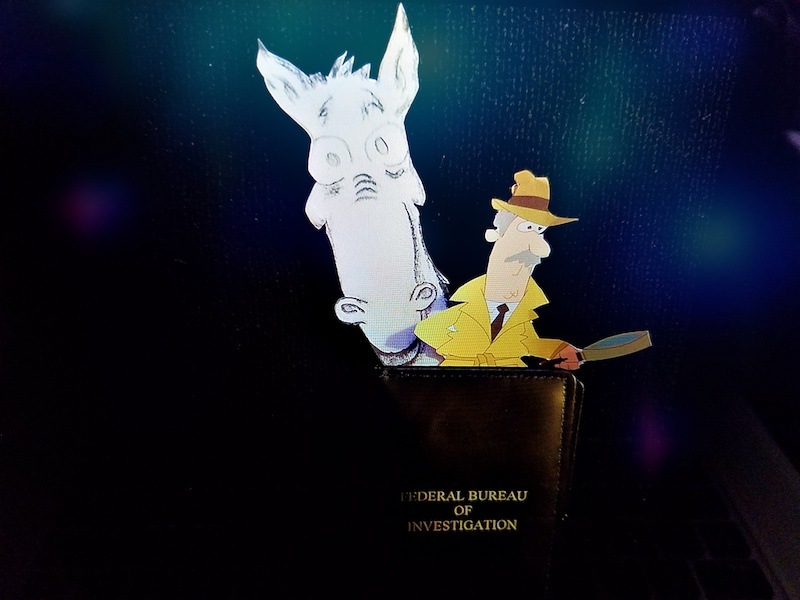 In your latest book you’ve brought to life who you believe to be the coolest protagonist ever, an FBI agent who rides into a fictional town on a beautiful and powerfully muscular solid white horse to save the day by solving your cleverly-created murder. Her first order of business—take charge of, well, everything. First, she gives the local homicide detectives the boot. Next she tells the chief to stay out of her way because this is a job for the feds and, by the way, she’ll need the chief’s office as her home base … so, “GET OUT!” Then the cocky and totally obnoxious special agent scouts the area for just the right person to fall in love with before the case is solved. Then and only then is it time to get down to the business finding a murderer.

Of course, you’ve gone the extra mile to get your details right by binge watching Brooklyn Nine-Nine and The Andy Griffith Show. You’ve tossed in a great crime scene, some fingerprinting details, DNA evidence, bloodstain patterns, a car chase followed by a requisite huge explosion, the agent saves the town sweetheart and her dog from certain death, she defies all orders from her boss because she’s determined to be the hero of the tale, and, here it comes, the big payoff … she shoots a pistol from the hand of one bad guy while simultaneously rendering another unconscious with a limply-delivered karate chop to the back of the crook’s neck. AND THEN, before the odor of smokeless powder (NOT CORDITE!!) clerk the air, the agent catches the meanest and baddest villain ever concocted by a writer in the history of the written word.

Well, those super cool fictional FBI details are all fine and Jim Dandy, with the exception of one minor detail …  FBI AGENTS DO NOT INVESTIGATE LOCAL MURDER CASES!! And they don’t come into town and take over any local cases. They don’t have that authority or jurisdiction.

Okay, this one will be difficult to grasp, but here goes … FBI agents do not have a crystal ball that sounds off every time a child is abducted or a murder is committed. I know, what a shock. So take a moment to settle down and catch your breath before reading more of this crazy way-out information.

For the FBI to become involved in a local murder case, local law enforcement needs to invite the FBI in.

Yes, the FBI does investigate crimes against children—online predators and human trafficking and kidnapping, and parental kidnapping, But there’s no rule or law stating that the FBI must be called in to investigate kidnapping cases. The fact that they can investigate them doesn’t mean they work ALL abduction cases. Each state has its own kidnapping/abduction laws. Local detectives work kidnapping cases all the time. ALL. THE. TIME.

Keep in mind that there’s not an FBI field office located in every single town in the good old USA. They don’t have satellite headquarters situated next to your corner Piggly Wiggly or Billy Buck’s Feed Store. Sometimes agents are several hours away from a town. In fact, they’ve probably never set foot in many of your towns. Nope, they probably don’t know that Dinglebopadoodle, Rhode Island even exists.

Again, unless the local cops give ’em a call, the FBI has absolutely no means of knowing when Bubba Jenkins got all licker’d up and kilt T-Bone Roberts over cheatin’ during a checker game. Nor would the feds know when creepy human-trafficker Paul Pedophile used the promise of a never-ending supply of Goobers, Sno-Caps, Raisinets, and Junior Mints to lure little Daisy Sue from her front yard while she was in the middle of hopping and scotching in the driveway. Someone would have to actually call the FBI to report these crimes.

In the case of Bubba Jenkins and T-Bone Roberts, well, the feds would simply refer the caller to their local authorities. They’re not going to be involved in local murder cases unless they’re invited in by a city chief of county sheriff.

Even in cases involving serial murders, local authorities handle the investigations. The way the FBI becomes involved is when the local law enforcement invites them to participate because they need the FBI’s resources, expertise, etc.

However, when the investigation leads to other states—victims killed in similar manners that point to a single killer—it’s best that the FBI take the lead since they have nationwide jurisdiction. Besides, to have a local detective trekking from state to state to track down a killer would take a vital resource away from local department. The FBI is far better suited to handle such a task. However, local detectives can and do travel to other jurisdictions as part of their investigations.

The FBI might open an investigation into the disappearance of hopscotching little Daisy Sue; however, they’d likely coordinate activities with the local police who, by the way, would probably have detectives already working on it. The more folks working to find the child the better the chances of finding her. Like investigating a serial killer, tracking an interstate-traveling child abductor is best left to the FBI since they have the resources and jurisdiction to work in all U.S. states. Still, local police can and do work kidnapping cases that cross state lines. I, for example, have investigated a few of those cases, including one that originated in Virginia and ended in Washington state. The child was unharmed and returned to her family. The suspect arrested and convicted.

I can sum this up in a single word … NO. There is no magic database where an FBI special agent enters the name of a person—any person in the world—and instantly receives every single detail about the person—address, phone number, cars owned, blood type, underwear and shoe size, name of pets, number of freckles on their face, friends, favorite meal and drink, etc. It’s just not so.

Various types of records are kept in various independent locations—courts, medical facilities, military, schools, individual law enforcement departments/agencies, etc. Those databases are not linked. A person’s mental health records are not tied to other databases. Driving records are not cross-linked to hospital records, and so on.

Information contained within these systems is only as accurate as the data entered. If the person entering the data makes a mistake, well, that’s the information that shows up when a search is conducted. The National Computer Information Center (NCIC) is a massive database containing tons of crime data; however, the accuracy and timeliness of this information is dependent upon the numerous law enforcement agencies from around the country who enter the data. Many agencies enter incomplete information, if any at all. It could take weeks or months for a loan enforcement officer/agent to compile needed information on a single suspect, not a matter of minutes or even hours.

My goodness, what load of BS. This misconception has been written into books and TV shows so often that even cops have begun to believe it, and that’s unfortunate, because when agents show up at a local department they’re often given the “stink-eye” by officers and detectives. This unwarranted misconception sometimes leaves agents with the task of building the trust of local law enforcement when that trust has not been violated.

I’ve worked and trained with agents of various federal agents and agencies over the years—FBI, ATF, U.S. Marshals, Secret Service, DEA, Border Patrol, ICE ( INS back in the day), Homeland Security, Department of Defense (DoD), DCIS, and more, and not once encountered an issue. In fact, when standoffishness occurred it was from local officers toward the agents. So yeah, thanks to the books, TV shows, and films that caused this imaginary trouble.

I once assisted a pair of FBI special agents on a civil rights investigation as a result of a white police officer who shot an African American male after the subject aimed a loaded pistol at him. The agents were pleasant, professional, and warm and compassionate toward the subjects of their investigations. In private they were funny and had a ton of interesting stories to tell.

Stink Eye – to look at someone in a disapproving way:
“The people waiting to use the computers were giving me the stinkeye.”
~ Cambridge Dictionary

What’s that? You want to know what cases the FBI does work?

Hmm … I’m not sure if you’ll be able to handle the truth. After all, you see so many all of the above in so many books.

I know,  your editor said that IS what FBI agents do.

Anyway, see for yourself. These are the cases the FBI works. No, I didn’t make this up. It’s fact.

WHAT THE FBI INVESTIGATES:

It’s important for writers hoping to offer a bit of realism in their stories to at least know the basics of criminal investigations, including “who does what?” For example, absent in the list cases investigated by the FBI is MURDER. No, typically the FBI does NOT investigate local murder cases, nor do they ride into town on white horses to take over bank robbery or abduction cases. Instead, they’re available to assist local and state agencies. However, if a local department is not equipped to handle a bank robbery, for example, the FBI will indeed take the lead upon request.

In a case of child abductions there does not have to be a ransom demand nor does the child have to cross state lines or be missing for 24 hours before the FBI will become involved. When the FBI is alerted that a child has been abducted they’ll immediately spring into action and open an investigation. They will do so in partnership with state and local authorities.

So there you have it, writers—details to help add an extra level of zing to your next twisted tale.

*Resource – FBI and, of course, my personal knowledge and experience.

Next up … the FBI’s forensic laboratory. 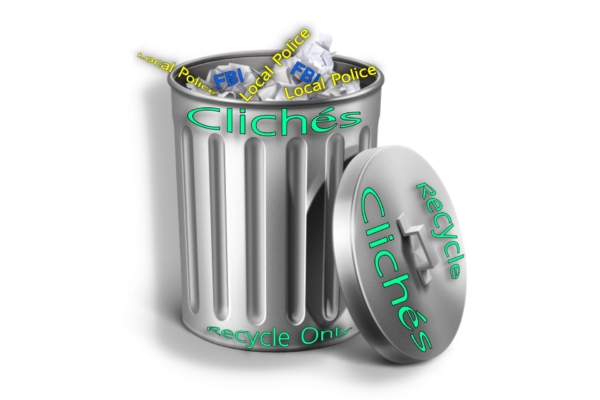