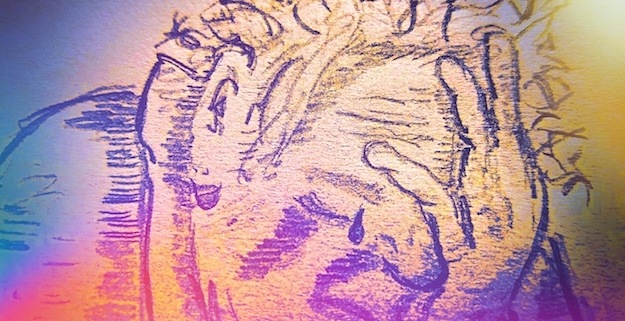 The job was fantastic. Everything you wanted and more. Excitement, fulfillment, serving mankind, and action that produces an adrenaline rush like no other. But, along with following your dreams sometimes comes a price. And sometimes that price is quite steep.

Yes, becoming a cop was everything you’d always wanted out of life. And, you’d lucked out when you married the perfect partner, had two beautiful children, purchased a nice home with a not-so-bad mortgage and two fairly new vehicles—a mini-van for hauling the kids to ballgames, scouting events, and family vacations, and a sporty little convertible for weekend fun.

Adding to the perfect lifestyle was an always-by-your-side speckled dog named Jake who the kids forced you to rescue from a local shelter. Work was going great, too, and you’d finally reached the five-year, unofficial, no-longer-a-rookie status. Along with that milestone came a permanent dayshift assignment.

No more graveyards. No more of the Sandman tugging at your eyelids while patrolling dark side streets and alleys. No more trying to sleep with bright sunlight burning its way into your bedroom.

Yes! More awake time at home with the family. Normal meals and meal times. No more Denny’s Lumberjack Slams with a side of hash browns at 4 a.m., or the cold, not-quite-finshed-because-of-the-shooting, three piece, once-extra crispy meals from the Colonel.

Better still, you felt good. Well-rested. You’d finally watched your favorite TV show at its actual air time, not as a recording after everyone else has seen and talked about it for days.

You felt so good, actually, that you’d volunteered for extra-duty. Running a little radar on your off time would be an easy assignment, and the extra money would come in handy during the holidays. Besides, little Sally Sue needed braces and Jimmie Joe had already been dropping hints about attending a Boy Scout summer camp.

A few hours each week. How bad could it be?

Your supervisor liked what she saw. You’re a hard-worker. A real go-getter. She wrote a glowing letter recommending you for the Emergency Response Team (ERT). You interviewed and before you knew it you’re on the team. Training was only twice a week, Tuesday and Wednesday afternoons, your days off. Well, there’s the bi-monthly night training exercises, and the team competitions.

You didn’t get called out all that often—two, three times a month at the most? The last time, though, you were gone for two days, but that really wan’t too bad. Well, maybe you could’ve cut back on the radar assignment. But, the money was nice. After the holidays. Yes, that’s it. You’d promised to cut back after the holidays.

The hostage situation was a tense one. Took 14 hours before the sniper finally popped one in the guy’s T-Zone. That piece of crap never had a chance to think about pulling the trigger before his lights went out. At least his victim came out okay. She’d probably be scarred for life, but she’d live. Might spend a few days with a shrink, but she’d live.

Man, that sniper was good, huh? Blew that guy’s brains all over the wall. Sat him down in a hurry, too. Now that’s what a bloodstain pattern is supposed to look like. TV directors should see this stuff.

To celebrate a job well done the team went to a bar for a few drinks and to unwind. You made it home at 3 a.m., drunk. Your wife and kids were fast asleep. There’s a piece of cake on the counter. The chocolate frosting had dried and hardened just a bit around the edges.

You couldn”t sleep. Brains and blood. That’s all you saw when you closed your eyes.

You knew she was awake and could smell the cheap whiskey, cigarette smoke, and drugstore perfume.

Hadn’t smoked in ten years. When had you started, again?

Brains and blood … that’s what was on your mind.

You’d stared at the ceiling, knowing that in two hours the clock would ring. Would the Jack odor be gone by then?

Brains and blood, that’s what kept your eyes open and your mind spinning.

The buzzer sounded and you showered and dressed. Skipped breakfast because your gut felt sour and no matter how many times you brushed your teeth, you felt as if your breath reeked of dirty ashtrays and stale booze.

A domestic he-said-she-said, a lost kid, and an overnight B&E at a midtown mom and pop grocery store. Your head pounded. Pearl-size beads of sweat ran down your back, following your spine until they dipped below your waistband. You dreaded the overtime radar detail. Two more months. Only two more months and the holidays would be over.

A drug raid at 10 p.m. A good bust, too. Two kilos and some stolen guns. What’s a couple of beers to unwind? Sure, you’d go.

It was 3 a.m., again, a few hours after switching from beer to hard liquor, when you’d fumbled with your keys, trying to find the lock on the front door. This, after parking your car askew in the driveway with the driver’s side tire on the lawn and leaving the car door wide open, an act you’d very much regret when trying to start the car the next day.

Passed out on the couch. Late for work, again. Forty-minutes late, actually, due to a head-splitting hangover and a dead car battery. A written warning.

A week later you’re late again, but this time the sergeant smelled the alcohol on your breath. Suspended. Ten days.

Your wife went shopping with her friends. You stayed home with the kids. She came home late. Really late. The stores closed hours ago. No shopping bags and you could’ve sworn she’d been wearing panty hose when she left.

Back at work. Another shooting. This time you fired a few rounds at the guy. He ran. You chased. He turned and fired, so you popped off a couple of rounds in return. He dropped, bleeding and twitching on the pavement.

The kid died. He’d turned thirteen just four days before you killed him.

The department shrink prescribed a couple of meds to help you sleep.

The media hounded you relentlessly. Published your name and address along with a photo of your home.

Another paper published your department and academy records, including the one where your  scores on the firing range were darn near perfect. You’d meant to kill him, they’d said. Your skills were that good. Sure, you knew better, but …

She was out shopping, again. This time she wore her “going out” makeup and the tight skirt and top she once wore on the night of an anniversary. The one she called her “you can’t resist this” outfit. She was right, too, because those legs went on for days.

More Jack Daniels and a pill or two or three. Lost count.

You’re awake, staring at the ceiling, knowing the clock is set to go off in three hours. She’s snoring gently. You smelled the Jack with each tiny exhale. The aftershave burned your nostrils.

Then a trip to the garage, in your pajamas. Barefoot.

The concrete felt cool on the soles of your feet.

An owl hooted outside, somewhere far in the distance.

A cricket chirped from behind the old, rusty furnace.

Boxes filled with old clothing meant for Goodwill sat against the block wall where they’d been for a couple of years.

Moonlight wormed its way through a narrow window next to the ceiling. It painted a milky line that reached from the center of the floor to a tall stool next to a dusty table saw.

You slid the stool next to the workbench where you’d mended countless toys, appliances, and fixed the heels on her favorite shoes. You stood still for moment, taking in the surroundings—your tools, the kids’ old bikes, a couple of rickety sawhorses your father used when he was young, the water softener equipment, and a trunk filled with years of memories.

Then you sat on the wooden stool top, resting the balls of your feet on the bottom rung, and glanced down at the off-duty weapon in your hand, your favorite pistol. Never missed a single target with it.

You couldn’t remember taking out of the dresser drawer, though.

You opened your mouth and placed the barrel inside, tasting bitter gun oil.

The metal was cool against your tongue and the roof of your mouth. Familiar. Comforting in a peculiar sort of way.

A lone tear trickled down your cheek. 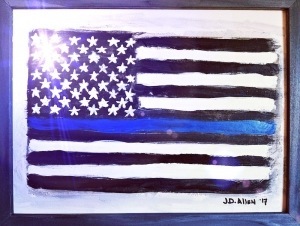 In 2016, 108 police officers died as a result of suicide. That’s more than the total officers killed by gunfire and traffic accidents combined in the same year.

You can learn more about JD Allen and her books by visiting her web page at JDAllenbooks.com