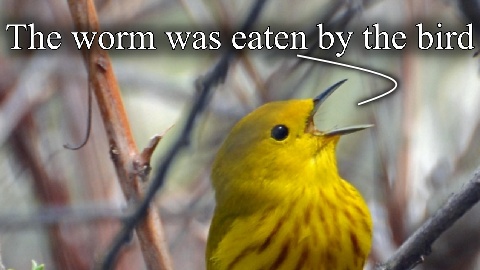 Writers understand that active voice is when the subject of a sentence performs the action represented by the verb.

The bank robber counted the loot.

In the sentence above, the robber is the subject who performed the action (counted).

In passive sentences, the object of the verb, the subject, is usually followed by the verb, which is typically a form of “to be,” a past participle, and the word “by.” Passive voice can confuse readers.

The loot was counted by the bank robber.

Passive voice shoves the subject (the bank robber) to the back of the action, instead of at front and center. And this, the shifting of action in a sentence, is why police officers should avoid the use of passive voice when writing reports and other official documents, and when providing official testimony. Passive voice, unfortunately, is often a part of “cop speak” that causes much unnecessary grief for officers and prosecutors, but is goldmine for defense attorneys.

For example, fictional Officer I.Iz Baddrighter typed this sentence in the narrative section of an incident report:

A wad of cash, two gold necklaces, and a gun was found under the living room couch.

If this occurred in real life, when prosecutors received the case, since the report was written in passive voice, they’d have no clear idea who found the items, who conducted the search, etc.

A better report, written in active voice, clearly indicates who performed the action.

I, Officer I. Iz Badrighter and Officer Dewey Good, served a search warrant at 1313 Mockingbird Lane, where Officer Good found cash, two gold necklaces, and a gun under the living room couch.

Written in active voice, the report detailing the same event, tells who was there, why they were there, and who found the items.

An officer’s use of passive voice can result in all sorts of troubles, including a stumbling courtroom testimony where the officer is vigorously cross-examined over “who did what and where,” and even the dismissals of cases.. All due to innocent but ambiguous wording.

Imagine a super-savvy defense attorney seizing upon the statement, “Due to our prior knowledge of Ricky Robber being a carjacker and knowing he always carries a couple of pistols, a high-risk traffic stop was conducted by us.”

The officer is in the hot seat in this situation, because he has to explain who or whom he’s speaking of when he wrote “our” and “us.” How “they” knew Ricky Robber is a carjacker? Did the officer arrest Robber for the same crime in past? Did the officer run a criminal history and carjacking was a crime Robber served time for committing?  The mention that he always has a pistol or pistols in his possession. Is he never without a sidearm? Are officers watching Robber every minute of the day, even as he sleeps? These are all points a defense attorney could hammer and hammer until the officer eventually becomes confused by their own words.

The officer in this case could’ve saved himself a ton of grief by simply writing:

“At 2200 hours, I, Officer I. Iz Badrighter and Officer Dewey Good witnessed Ricky Robber driving west near 24 Elm Street in Mayberry. Earlier in the shift we received a “Be On The Lookout” (BOLO) radio message stating Robber committed a carjacking on Main Street at 1935 hours. A check of Robber’s criminal history indicated sixty-three past carjacking arrests. In each of those cases, arresting officers reported Robber drawing a pistol from his waistband and pointing it at them. Knowing these facts and for our safety, Officer Dewey Good and I conducted a high-risk traffic stop. Robber was subsequently placed under arrest for the outstanding carjacking warrant.”

With this report in hand, prosectors know exactly what happened, who did what, when they did it, and why. A copy of the report during courtroom testimony is also extremely helpful to the arresting officer.

So yes, active voice is typically the best route. However, sometimes, to avoid embarrassment, passive voice is the better use of words, like the time …

It was back during my time as a patrol officer working the graveyard shift when we received a fight call involving multiple suspects armed with various weapons. Three of us responded, stopped our cars, and hopped out to break up the melee. When all was under control we headed back to our cars. But, instead of three cars only two remained in the spots where we’d left them—my car and a car belonging to the other officer. The missing car was that of the sergeant who’d also answered the call. He’d committed a serious faux pas, leaving the doors unlocked, the engine running, and the keys in the ignition. So we and several other units spent the next hour searching for the stolen patrol vehicle. Then, when it was spotted, we spent the next hour chasing the car at high speeds, with the car thief listening to our radio traffic.

Anyway, it was far less of a blow to the sergeant’s ego for us to write the report in passive voice.

“Sergeant I. Goofup’s patrol vehicle was missing for three hours. It was later found in the possession of Ima Crook.”

Written in active voice, well, the report wouldn’t have sounded quite as kind.

Sergeant I. Goofup, while leaving his vehicle to respond on foot to a fight-in-progress, left the engine of his patrol car running with the keys in the ignition. All doors were unlocked. Ima Crook, a 27-year-old male, stole Sergeant Goofup’s car, an action resulting in a high-speed chase. Crook was arrested for the larceny of the department vehicle, reckless driving, eluding police, and disregarding signal by law-enforcement officer to stop.