I used to be terrified of flying. For 37 years, I refused. But three years ago, on a whim, I contacted Lee Lofland and lucked into a cancellation spot at Writers’ Police Academy, held in North Carolina that year. I sucked it up and conquered my fear of flying, found an inner strength I didn’t know I had, and I started to gain the confidence to begin writing what I truly loved, crime fiction.

A huge part of that genre depends on research and details. Readers are smart and will hone in on anything you wrote incorrectly. And there’s only so much a person can learn from Google and nonfiction. Writers need to hear it, taste, feel it, and smell.

Writers’ Police Academy delivers on every level. My first year, in North Carolina, I was lucky enough to win a ride along with a county sheriff’s deputy.

Just as he finished telling me his patrol area was pretty quiet, a call came in for a self-inflicted gunshot wound. Several high-speed minutes later, we were at the location and I watched the deputy breach the door. Sadly, the man inside had committed suicide, and so the deputy and his colleagues began to secure the scene. I sat in the cruiser for several hours, watching how it all unfolded. My gracious deputy apologized profusely for being stuck there, but I assured him the little details I picked up were invaluable. I saw how the various officers walked and talked, how they compartmentalized the gruesomeness of the scene and worked with the grieving family. One deputy spent long minutes bringing out cats in carriers and made it a point to have them all face in a circle in an effort to calm them. It was a raw, human side of law enforcement I will never forget.

Last year, I went on the shooting range for pistol training. We were put through the same exercises as new recruits, and learned all aspects of using the pistol, the correct stance for a police officer, and practiced deadly force. I also got my picture in the Appleton paper, right below the article featuring Karin Slaughter (who is my crime fiction hero) as the conference’s keynote speaker. 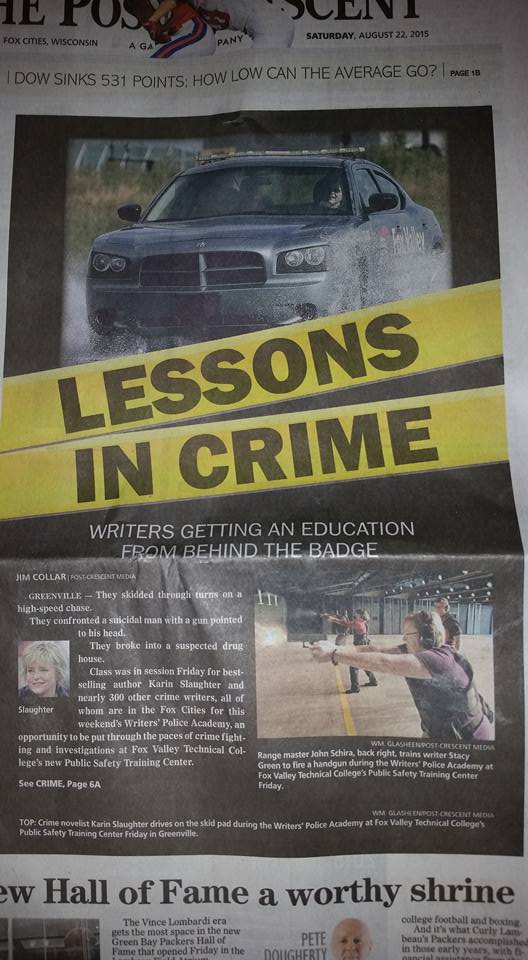 This year, I was part of group on an extensive tour of Wisconsin’s oldest maximum security prison, and I learned how to walk a crime scene and figure out blood spatter.

In three years of attending, I’ve found dozens of new classes to take: crime scene investigation, SWAT, interview tactics, constitutional law, criminal psychology, EMS, undercover work, private investigation, medical examiner and coroner presentations—the list goes on and would take up the rest of the article. Every class at WPA is taught by an experience professional, most of them full-time instructors at the police academy after retiring from law enforcement.

But the incredible classes aren’t even the best part. That’s a tie between the opportunity to pick the experts’ brains (and get their contact info for future questions) and the incredible real-life situations WPA likes to throw at us.

This year, the staff at NWTC stage two awesome demonstrations. First up, an MVA involving a drunk driver and a family. 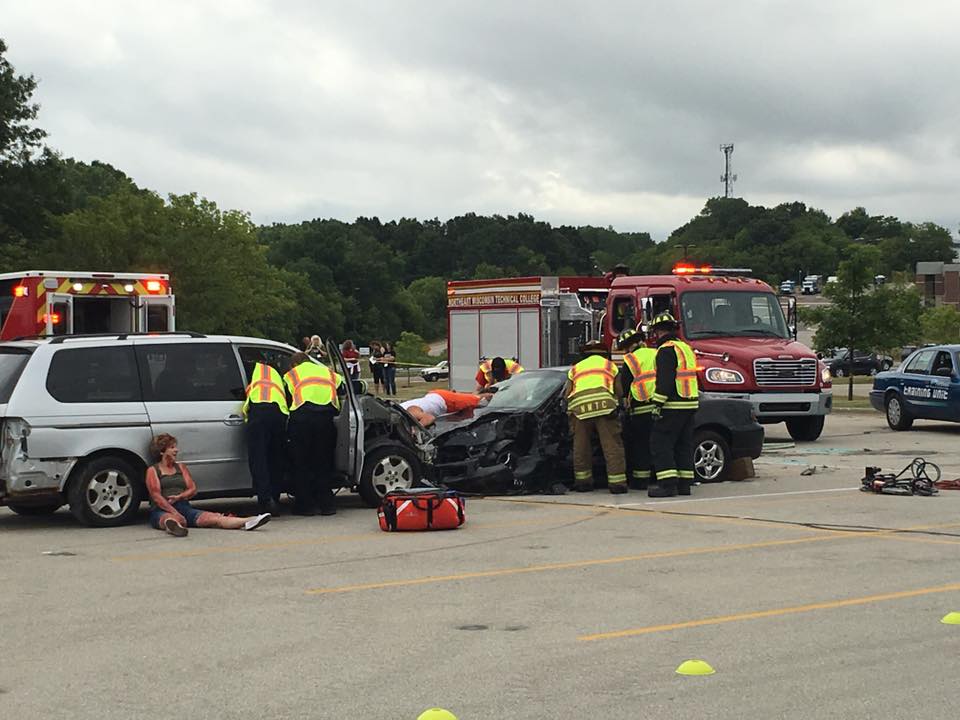 One actor played dead on the hood of a crumpled car for 45 minutes while another sobbed with grief, all while police, paramedics, and finally life-flight—a real helicopter that landed within yards of us—worked the scene just as they would in real life.

Next day, inside a crowded lecture hall, WPA instructors and volunteers staged a terrorist act. Several people were “knifed” and we watched the public safety officials handle the situation, including triaging the injured. For a visual person like me, stuff like this is gold.

I can’t underscore how much this conference has changed my writing life. It gave me the courage to go from suspense with romance to what I truly love—the dark, gritty stuff. I forged various public safety contacts and realized I could network with other authors, that I wasn’t as much of an introvert as I believed. I learned about the psychology of cops and the day-to-day stuff they go through and gained a new respect. I’ve been able to have conversations with my three favorite authors,—Lisa Gardner, Tami Hoag, and Karin Slaughter.

Last year, during Karin Slaughter’s signing, I told her I’d been struggling on my first gritty crime fiction, in part because I was afraid I couldn’t write the homicide investigation so that it was believable. She told me to face my fear and go after what I wanted.  So I got on the phone and found a cop in D.C. willing to work with me. I sold that book this spring.

This year, I got to tell Tami Hoag that her book, The 9th Girl, helped me get back into the right frame of mind to finish that same crime fiction thriller, and that just hours before she signed my copy, I found out my publisher is releasing the book in hardback in January. She was so excited she wrote “congratulations” with her signature.

How cool is that for the mom from Iowa who didn’t think she’d ever be able to branch out far enough to write what she really wanted?

It’s all because of the opportunities from Writers’ Police Academy, and it’s the one conference I won’t miss, because there’s always something new and exciting.

Thanks so much to Lee and Denene Lofland for all they do for us. I’m already marking my calendar for next year!

Stacy Green is the author of the Lucy Kendall thriller series and the Delta Crossroads mystery trilogy. ALL GOOD DEEDS (Lucy Kendall #1) won a bronze medal for mystery and thriller at the 2015 IPPY Awards. Stacy has a love of thrillers and crime fiction, and she is always looking for the next dark and twisted novel to enjoy. She started her career in journalism before becoming a stay at home mother and rediscovering her love of writing. She lives in Iowa with her husband and daughter and their three spoiled fur babies. Her current work includes the true crime series KILLER SHORTS: Murderers Among US, and her crime fiction novel, KILLING JANE, will be available in January 2016.

Stacy is represented by Italia Gandolfo of Gandolfo, Helin and Fountain Literary Management for literary and dramatic rights.

Stacy loves to hear from readers!