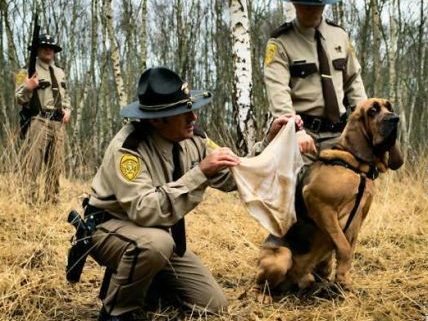 The job of locating evidence can be quite difficult. It’s a tedious job that’s sometimes performed while crawling around on your hand and knees among garbage and other filth, including human waste and tissue. In order to prove their cases investigators are often faced with the challenge of locating nearly invisible items, such as hair, fiber, and DNA. They also have to deal with odors that can send even the toughest of all maggots running the other way. Fortunately, science and technology makes the job a little easier with products like these:

The Green Forensic Laser is used to locate hard to find evidence, such as bone chips, fingerprints, fibers, and narcotics residue. This particular unit is a battery powered device that’s easy to use in the field. The laser weighs 33 pounds without the battery, 42 with it. The price tag for this little gem is a whopping $45,000.00 which makes ownership for departments with tight budgets nearly out of the question.

Bullet hole testing kit for the identification of, you guessed it, bullet holes. The kit enables investigators to accurately determine caliber, type of bullet, and the direction the bullet traveled. Cost – less than $300.00.

Your hero can’t nab the bad guy because the thug ground off the serial number on the murder weapon? No problem, if your investigator can put his hands on a Serial Number Restoration Kit like the one pictured above. The chemicals in this kit can easily raise ground away markings on steel, nickel, cast iron, aluminum and brass copper. $115.00

Presumptive blood test kits allow investigators to test suspect stains in the field. A positive reading lets your hero know if that odd, rusty-red stain on the carpet is indeed blood, or not.

Like Luminol, three Blue Star Forensic tablets mixed with distilled water allows investigators to detect the presence of blood. The bonus of using the Blue Star kit is that it doesn’t destroy DNA like the other product. $76.00 for the kit. Refills tablets are available.

The odor inhibitor kit is for the investigator who has never quite become accustomed to the smell of decomposing human flesh and organs. A little dab of this vanilla-scented gel on the upper lip and it’s just another day at the office.