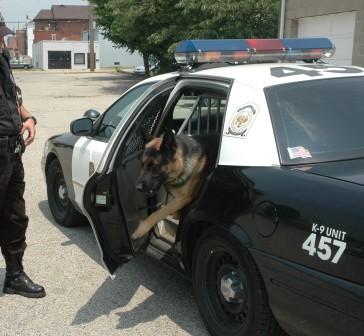 Dogs used by police agencies are trained for specific purposes, and the breed of the dog normally determines the duty assigned to it. Strong, aggressive breeds such as German Shepherds and Rottweilers are normally chosen as patrol dogs. These dogs are the biters of police canines, and they are used for the apprehension of criminals, crowd control, and for the protection of their handlers. They are trained to bite on command, and they are trained never to bite a suspect who is standing still and complying with a police officer’s commands.

Canines make excellent partners. They’re very loyal and will go to great lengths to protect their handlers. To better assist canine officers, their patrol cars are equipped with a remote controlled rear window or door that operated by a device attached to the officer’s gunbelt. A push of a button (above photo) opens the door allowing the dog to come to his partner’s aid.

Patrol dogs are trained to bite as a game. During their training, they are taught to bite a suspect who is wearing either a padded sleeve on one arm or a full bite-suit. The instructors make biting a game for the dogs, so it is fun for them to sink their teeth into their suited prey, and they are rewarded and praised for doing so.

Patrol dogs are not trained to be mean. They just want to play in the way they were taught – by biting. I have seen some K-9s that liked to bite so much they would bump a suspect with their nose, hoping he would move so they could bite him.  One particular dog that comes to mind  buried his nose in a suspect’s crotch and then  nudged gently – his way of trying to get the guy to move so he could bite.

Less aggressive breeds, such as Golden and Labrador Retrievers make excellent narcotics- and explosive-detection dogs. Narcotics-detection canines are normally taught to detect four kinds of drugs, such as marijuana, methamphetamine, cocaine, and heroin. But they can be trained to detect others, including mushrooms and various pills. They can be taught to aggressively alert police officers by scratching around the area where they’ve detected the drugs, or they can be taught to sit, on their discovery – a passive alert.  For obvious reasons, explosive-detection dogs are taught to alert passively.

Search-and-rescue dogs are trained to find people by using their keen sense of smell. Dogs have the ability to detect several scents at once. Where humans smell a pot of stew cooking, dogs differentiate the individual ingredients – onions, carrots, meat, etc. It is this remarkable ability that allows the canine to focus on one particular scent – dismissing the unimportant ones – and follow the target smell to its source. Hiding drugs in coolers beneath piles of dead fish won’t fool a trained narc dog. Tracking dogs are also used to locate cadavers. These dogs can find human remains on land or in water. Any police dog can be trained to track, but the dog best suited for this job is the Bloodhound.

Bloodhounds are large, extremely affectionate dogs that will relentlessly follow a track. Some police-canine handlers prefer not to use Bloodhounds to track dangerous felons because the dogs are so friendly. It is not unusual to see a Bloodhound find a violent criminal and then attempt to lick or cuddle with the crook.

Any police dog can be cross-trained to serve other purposes but, many handlers prefer to use a dog for one specific purpose, except in the case of tracking and biting.

I’ve found bad guys tend to surrender a lot faster when they’re facing a snarling police dog whose bite is much worse than his bark.