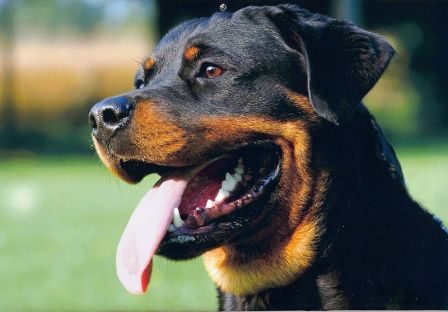 Our power is out this morning here in paradise, which means I can’t write a new blog. So…here’s a repeat to keep you occupied until things return to normal.

Dogs used for law enforcement are trained to perform a variety of duties. One of those assignments is patrol. Patrol dogs (various agencies may use different terminology) are the canines used to apprehend criminals, assist with crowd control, track fleeing suspects, and search buildings or land areas for criminals who are hiding from the police. These aggressive dogs are are the biters.

The most popular breeds used for patrol work are:

German Shepherd – The Shepherd was bred for its intelligence and to protect herds from predators. In the canine world the Shepherds intelligence is surpassed only by Border Collies and Poodles. Their ability to learn commands quickly makes them an excellent choice for police work.

Belgian Malinois – These 65 -75 lb dogs are bred as working dogs, for protection and police work.

Rottweiler (above) – originally bred in Germany as a herding dog, but was often used as a beast of burden for hauling wood and other items to market. Very loyal and aggressive breed.

A dog’s nose has approximately 200 million scent receptor cells. Humans have about 5 million. Because of this large number of scent receptors, dogs have the unique ability to discern one scent over other, even when there are several different items around. For example, we smell a pot of delicious homemade soup cooking. A dog smells the individual ingredients – onions, meat, tomatoes, carrots, etc. That’s why bad guys can’t fool a narcotics dog by attempting to mask a drug’s scent with things like coffee and fish. A police dog would detect two separate odors.

Patrol dogs—the biters—must undergo obedience and agility training. These animals are trained to work on and off leash. They’re also trained to respond to both verbal commands and hand signals.

Handlers spend a huge amount of time bonding with their dog. They also spend a lot of time teaching the dog who’s in control. In the beginning that latter is not always an easy task. A large Rottweiler, with an independent mind, can be quite a challenge for a brand new handler. I know. My hands have lots of scars from dog bites I received during the first few weeks of training with a new dog (they call them green dogs at the academy I attended).

Patrol dogs are trained to perform in a variety of settings and conditions. They must react as trained no matter where they are when needed.

Patrol dogs are trained not to bite until they are given the command to do so, or when their handler is in danger. And, by the way, biting is a game to these dogs. They’re not trained to hurt anyone. 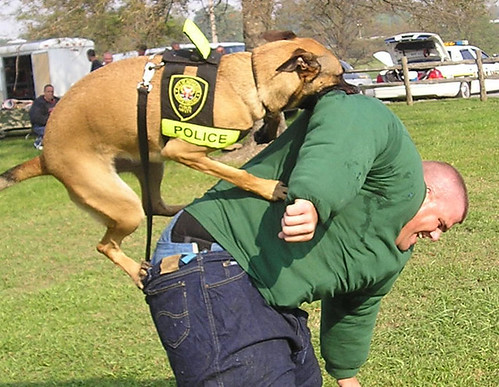 Patrol dogs must respond without hesitation. They must continue to stop the threat until the suspect surrenders, or until its handler commands it to stop. These dogs are also trained to guard a suspect while the officer officer searches the criminal for weapons. If the suspect makes an aggressive move toward the officer, the dog will react accordingly to protect the handler.

Patrol dogs are trained to ignore loud noises such as yelling, sirens, and gun shots.

* See you when the power is restored….