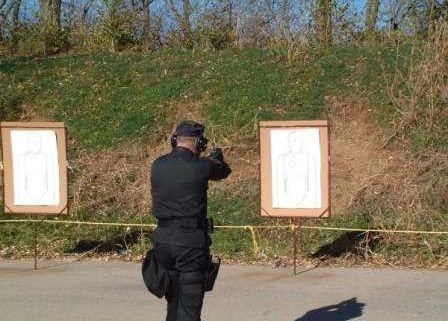 Firearms training is one of the most enjoyable parts of the police academy experience. After all, where else can you go to shoot a bunch of ammunition on somebody else’s dime? However, it doesn’t take long for the new recruits to realize these lessons could very well save their lives at some point during their career.

The week begins in the classroom with the students learning the nomenclature of pistols, revolvers, amd shotguns (Remember, not all academy training is the same). They learn how to field strip (take apart) each weapon, clean it, and to safely re-assamble them. They’re taught how to properly lubricate their weapons, and how to check them for damage. 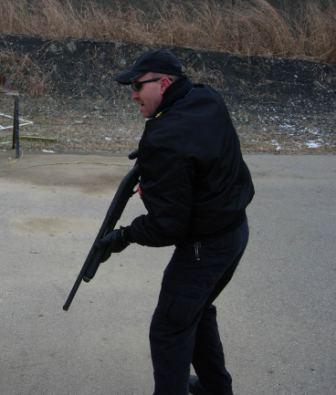 After the instructors are certain the rookies are able to safely handle their weapons, they begin teaching how to hold and grip a pistol or revolver. They also show their students the best method of drawing the weapons from a holster.

At this stage, the students get their first experience of drawing their weapons while giving the command “Police, don’t move!” They also practice drawing from various positions, such as standing, kneeling, and while lying prone, on the ground.

Students learn to reload while under fire. They also learn to clear their weapons from jammed cartridges and other stoppages. The recruits practice lifting their weapons to eye level; they learn to focus on the weapon’s sights while keeping the target in their line of vision, and they practice breathing properly. All this rehearsal time builds the recruit’s strength and stamina, an important attribute when they’re in a do or die situation.

Looking through the pistol sights. It’s important to line up the front, single dot sight with the two rear sights (the front dot is the larger white dot in the center).

Soon, the time comes to actually fire their weapons on the range. After dry-firing a few times, they’re ready to load live ammunition. 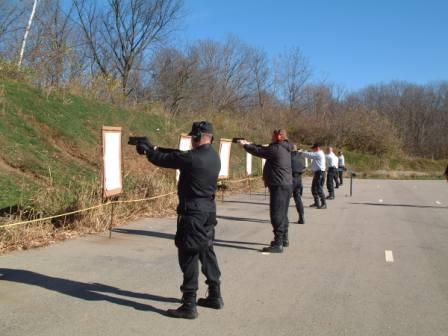 Police recruits are taught to shoot center mass of their target, meaning the center of the largest portion of the target. On a human, that would be the torso area. To help police officers become accustomed to aiming for center mass, silhouette targets are used for practice in the police academy.

(a) Each officer is restricted to the number of magazines carried on duty. Magazines shall be loaded to their full capacity. The range instructor shall determine when magazines will be changed.

On command, draw and fire 12 rounds in 20 seconds, make weapon safe, and holster.

On command, draw and fire one round (two seconds) or two rounds (three seconds), make weapon safe, holster, repeat until six rounds have been fired.