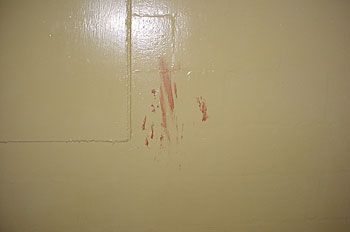 Not a single drop of his blood was visible. Not even a speck.

Her lips split into a wide grin as she admired her work. Picasso himself couldn’t have done a better job.

Satisfied, now that police would never locate a single clue, Ida Dunit began the task of putting away the drop cloth, a half-empty gallon can of Midnight Blue paint (guaranteed to cover anything in a single coat), and the green fiberglass stepladder, his favorite. Then she placed the brush and roller cover, both still dripping with the blue goo, into a plastic garbage bag, which she promptly placed in the can sitting at the curb.

After all, there’s no better day than garbage day to murder a husband.

She hadn’t felt this good in years.

Well, Ida, your plan would have worked were it not for the idea of Glenn Porter, an Australian who just happens to be an expert in forensic photography. You see, Ms. Dunit, the Australian fellow, a student at the University of Western Sydney, had a brilliant notion that will help police catch killers like you.

First of all, Porter knew that infrared light, light with longer wavelengths than visible light, has the ability to penetrate layers of paint. So, using an ordinary digital camera, he simply swapped the filters, allowing only infrared light to be recorded. The result…well, let’s just say, Ms. Dunit, that the police are in the process of issuing a warrant for your arrest as we speak.

Yes, this simple, yet remarkable process allows blood to be seen even under six coats of black paint. Other colors are just as easily penetrated by the infrared light, such as orange, purple, yellow, green, and yes, Ira, even your color of choice, Midnight Blue. Even six coats of bright red paint, the color of fresh blood, can’t hide the evidence from the camera.

The only difficulty found was with white acrylic paint. The camera could not “see through” as little two layers of it.

And, for those of you who love a twist, Mars Brown might be the paint color your villain would want to stock in his tool shed, since it contains iron oxide-based pigments…basically the same stuff (iron) that makes blood visible to the infrared camera. Therefore, blood stains, no longer distinct from the surrounding hue, would simply blend in with the wall color.

And now, Ms. Ira Dunit, you have the right to remain silent. Anything you say will be…