Twenty-three stab wounds and two badly mangled ears were the result of what started out as a leisurely afternoon stroll in his own normally quiet neighborhood. Oliver began his walk on Courthouse Road, and when he reached Bevills Hills Mobile Home Park he decided to turn in and have a look around. What happened next was something horror movies are made of.

Oliver barely made it onto the mobile home park property when he encountered 23-year-old Benjamin Fullwood and his two pet pit bulls. Without warning, Fullwood immediately sicced the two pits on the unsuspecting pedestrian. The dogs brutally attacked, repeatedly chewing, tearing, and gnawing at Oliver’s flesh. Witnesses, including several children, were appalled at the sheer violence of the charge. But the bloodshed didn’t stop there. Fullwood produced a knife and joined his dogs in their attack on their defenseless victim, stabbing Oliver nearly two dozen times, landing most of the blows in the neck and leg area.

Bystanders dialed 911 and sheriff’s deputies arrived in short order, but the damage was done. Oliver was severely injured and bleeding profusely from his wounds.

Fullman initially lied to the deputies, stating that he’d merely punched the victim, but the deep stab wounds told a different story. Of course, the crowd of witnesses also told a different tale of the unprovoked, senseless attack.

Deputies arrested Fullwood and transported him to the local jail where his bond was set at $25,000. He also ordered the defendant to stay away from Oliver and his kin. Fullwood has an extensive criminal history that includes theft, weapons offenses, arson, and cruelty to animals.

The good news is that Oliver is expected to make a full recovery.

It’s still unclear, though, as to why a grown man would so viciously attack a passive pet pig named Oliver, unless the wandering porker was a witness to illegal activity committed by Fullman, and he was afraid the pig would squeal… *Update – Benjamin Fullman has been released on bond. 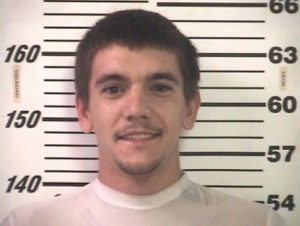 And, Oliver was released from the animal hospital Saturday morning after this posting. His owner says there’s a special place in his heart for Oliver since it was a new valve from a pig’s heart that gave him a second chance at life.