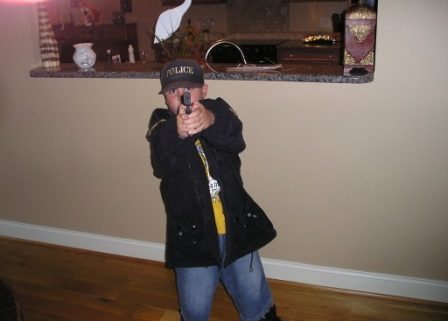 I was arrested at least sixty times last week. I got the works—Tasered, struck with a PR-24, peppersprayed, cuffed, stuffed, and booked. And I loved every minute of it. You see, our eight-year-old grandson came to stay with us for a week during his summer vacation and he had a million questions about my former career in law enforcement. Then came the role playing…lots of role playing. Day after day of it.

The questions started when he came into my office and saw several commendations, awards, photos, and certificates hanging on the walls around my desk. He wanted to know what a medal of valor was and what I’d done to earn awards for lifesaving. He seemed genuinely impressed that his grandfather was once an expert marksman and had even taught firearms training at the police academy.

His little fingers traced the edges of an old desk plate bearing my name, the rank of investigator, and the seal of the DEA. His big brown eyes lit up when he saw my defensive tactics master instructor certificate (he wanted to know if I had ever been a real-life Ninja). And he giggled when he saw a few old photos of me in uniform, with a full head of hair, and without the doughnut-around-the-waist syndrome. His attention lingered on the martial arts aspect of police training. He was fascinated with the fact that most police defensive tactics techniques are based on the martial arts.

We pulled out boxes of old police stuff that I’d forgotten I had. Things like old police hats and jackets, newspaper articles, and pictures. After an hour or so of digging through tons of memorabilia and listening to the accompanying stories, my grandson was ready to play cops and robbers. But he wanted to do it police academy style. He wanted to experience the real thing, from the radio call to handcuffing the crook.

What he said next was a real eye-opener for me. He said he wanted to learn how to hit people on the head with a baton (he called it a bat), beat them up, and then shoot and kill bad guys. Like real cops do in the real world.

I promptly told him that police officers don’t do things like that, but his expression quickly let me know that he doubted what I was telling him. Our conversation then went something like this:

Me: “Why do you think police officers do things like that?”

Grandson: “Because that’s what they do on TV and on video games, and it’s way cool!”

Grandson: “Uh huh! It’s cool when they bash their brains out and blood goes everywhere. And they kill the bad guys with machine guns and bombs and sticks and shotguns.”

And that’s exactly what we did. We had a long talk and I explained that a police officer’s job is to help people, not hurt them. But I also explained why it’s necessary to sometimes use force when bad guys are trying to hurt other people.

My grandson then wanted to know about police weapons and how they’re used to help people. Well, I don’t have an arsenal lying around the house so I did the next best thing, killing two birds with one stone. His second favorite thing (next to playing police) is to make things, preferably out of wood. So I took him out to the garage where we pulled out a few tools—saws, hammers, sandpaper, glue, and paint, and we went to work making some basic police equipment. I figured that by fashioning the items from scratch he’d have a better understanding of the finished products. We made a few crude items—a pistol, a can of pepperspray, a PR-24 (side-handle baton), and a Taser. 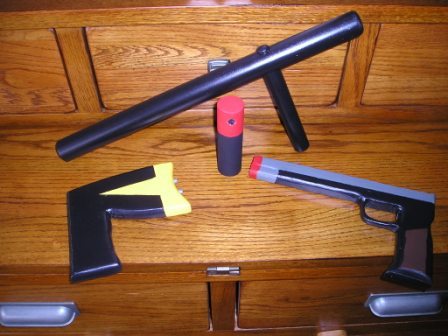 With those freshly-made tools in hand, along with a pair of real handcuffs, two radios, and my old Maglite, I went to work showing my grandson how and when each of the tools are safely used by police officers.

I explained Use of Force and each of the levels. He learned gun safety. We role played. We talked on walkie-talkies. He arrested me or let me go depending upon the situation. 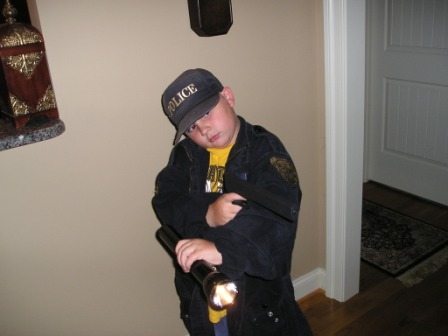 He conducted traffic stops. He raided my office countless times. He saved innocent victims, and he hauled the bad guy (me) to jail. 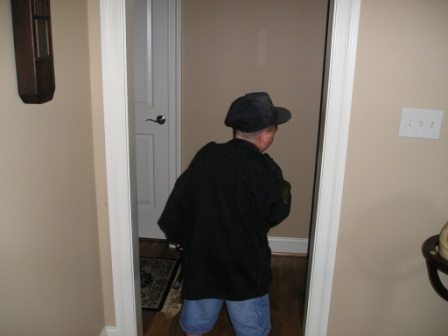 In short, my grandson went through a mini police academy, and graduated with flying colors. He also expressed an understanding of just how wrong TV can portray police officers.

Me, I had a wonderful time playing cops and robbers. Better yet, my grandson and I became closer than we’d ever been. I’m already counting the days until next summer. I wonder how long it would take me to build a police car out of wood? 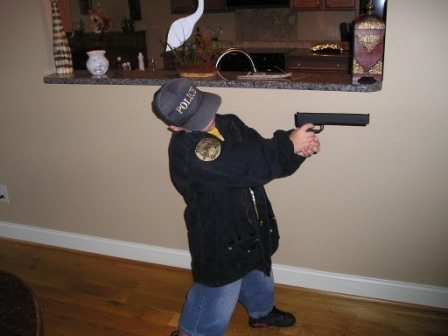 Shoot low boys, they might be riding Shetland ponies.”

Before The Blue Lights: What’s He Doing Back There?
Scroll to top