Think back to your first day at work.

Time clock. Punch in. Maybe a brief orientation. Introductions to the staff. Settle in to your office. A first meeting.

You know the drill. And it’s a aways a bit intimidating, not knowing the ropes or even the location of the restrooms.

But you get through it and at the end of the day you think all went well, considering you never did find the copier and the supervisor kept referring to you by the name of the person who formerly held your position. Later you discovered she was the office favorite who mysteriously disappeared while on a special assignment. Who knew she’d led a double life as a secret agent/rock star/champion of world peace/winner of mommy of the year award ten years running.

Well, my first day as a police officer, a deputy sheriff, actually, was a bit out in left field. And it went like this …

Keep in mind, things were slightly different back when I first got into law enforcement (yes, all dinosaurs were extinct by then, Noah had retired from shipbuilding, and Michelangelo had indeed finished cleaning and putting away his brushes).

Political correctness and safe spaces had not yet come onto the scene. Cellphones and computers were not around, at least not as we know them to be today. Heck, the first cellphone issued to me by a police agency came in a bag the size of a small backpack and was large enough to fill its bulky container.

Police officers carried revolvers in those days, not semi-auto pistols, and newly-hired officers, especially deputy sheriffs were given one year after the start of work to attend a police academy and complete the mandatory certification courses. This meant we could work, totally untrained and without certification of any type for a full 365 days. That’s NO training other than the on-the-job training we received until we finally made it to the academy.

And this is where this tale begins, my first night on the job—Thanksgiving night. I had not yet been issued uniforms, gun, car … not even a name tag.

I showed up early for my shift, expecting to be outfitted with the necessary equipment and perhaps some sort of orientation. But no, I was instructed to tag along with the captain, the chief deputy who was next in command directly under the sheriff himself. This guy was the boss of everyone other than the high sheriff, and he was a salty, crusty, gruff experienced cop with many years of dealing with the worst of the worst. He was well-respected by both police officers and the general public. He was fair, but firm. He was as tough as old shoe leather. And he was one of the nicest men I’ve met to this day.

After driving through various areas of the county, stopping to talk to business owners and the like, and checking on a few of the deputies, the captain pulled his car in front of a personal residence. The driveway, yard, and shoulder of the road were packed with cars. The house was well lit and it was obvious that there was a gathering of some sort taking place. I expected to be told to wait in the car while the captain went inside for whatever reason, but he told me to follow him. I was a bit taken aback to learn that we’d stepped into the midst a family Thanksgiving dinner and the family was that of my new boss.

We’d been there for only a few minutes when the captain received a message via radio and I knew it was something serious because he hopped up from his seat, motioned for me to follow, and then he practically ran to his car with me tagging along in his wake.

The call, he said, was about a man who’d shot his mother and then barricaded himself inside her house and was now taking potshots at passersby and the deputies and police who’d responded to emergency calls from neighbors.

When we arrived, after a heart-thumping ride with full lights and sirens blasting and blinking, I saw a side of the place I’d lived for many years, a dark something I’d never seen before. Police cars were everywhere. Officers were crouching down and hiding behind whatever cover they could find. Fire trucks and ambulances were positioned a few blocks away. News crews were already there and photographers were vying for the best spot to record the action as it unfolded.

The captain parked his car down the street a bit away from the chaos, and then opened his trunk. He reached inside a wooden box and pulled out a revolver and handed it to me. Next he grabbed a shotgun-like teargas gun from its case and loaded it.

“Come on,” he said. And I did, with my heart beating a very solid offbeat rhythm against my ribs. And why not, since bullets were zinging toward us from the house where the shooter had broken out a front window so he could pull back the curtain, fire a couple of rounds, and then duck back inside.

It’s safe to say that I was slightly (a huge understatement) nervous, but adrenaline pushed me forward.

The captain met with the officer in charge of the scene and then it quickly became clear that command had instantly changed hands. It also became quite clear that the confidence level of the officers on scene had risen to new heights. The boss was there and he’d know how to deal with the crazed shooter inside the house.

The captain fired three rounds of tear gas through the window. He used the PA system on one of the nearby patrol cars to call out to the man inside, telling him to come outside. We waited. Nothing. Not a peep. No signs of movement, and the shooting stopped.

We waited some more.

By that time, the local chief of police and our county sheriff had arrived. They’d been notified and had left their own family gatherings to come out (news cameras were there so of course the politicians slithered in).

The tear gas rounds had started a small fire in the room nearest us, and we could see the faint hint of flames below the window sill. So someone had to act quickly to save the man, any hostages, the man’s mother, if she was still alive, and the house.

So the chief ordered three of his officers to put on gas masks and other protective gear and then go inside to search for the shooter and, if possible, extinguish the small fire before it got out of hand. His thinking was that the suspect either killed himself with one of the last rounds we’d heard sound off, or that one of the tear gas rounds had struck him. Either way, we’d waited as long as we could.

So everyone stood ready while the three officers breached a rear door and went inside. By the way, I was ordered to stand guard at another rear door of the house, and the order included, “Do NOT let anyone past you.”

A few minutes later the three who’d gone inside came out and said the guy was not inside the house. One of the officers carried out the body of the elderly woman and delivered her to EMS personnel down the street. She was deceased.

Everyone’s first reaction—the guy had escaped through the door I guarded. After all, I was the new guy and three highly experienced officers had searched and found nothing.

New plans were underway—search the woods, side roads and streets, neighbors houses, etc.

The captain came over to me and motioned for me to follow him in side the house.

“Hold your breath for as long as you can. The place is still full of gas,” he said to me. “Let’s take one last look. I think he’s still in there somewhere and they missed him.”

So we went inside. Why not, I already had a whole four hours experience under my belt. I was carrying a gun I’d not fired. I had no handcuffs and if if I did I wouldn’t have known how to use them. And I didn’t know what to say to the guy if I did run into him. “Freeze sucka”’ came to mind but I somehow thought those words might not be appropriate.

The captain indicated to me that he was going one way to search and motioned for me to go another. He pointed to a closet door and I took the movement to mean I should look inside all closets. So he went his way and I went mine, with tears streaming down my cheeks and my eyes pits of smoldering coals. Tear gas is no joke, even tear gas that had started to dissipate.

As luck would have it I’d brought along a Maglight that I’d purchased with my own money. It came in handy. Really handy.

With light in one hand and gun in the other, I turned the handle on the closet door (using the hand holding the light). 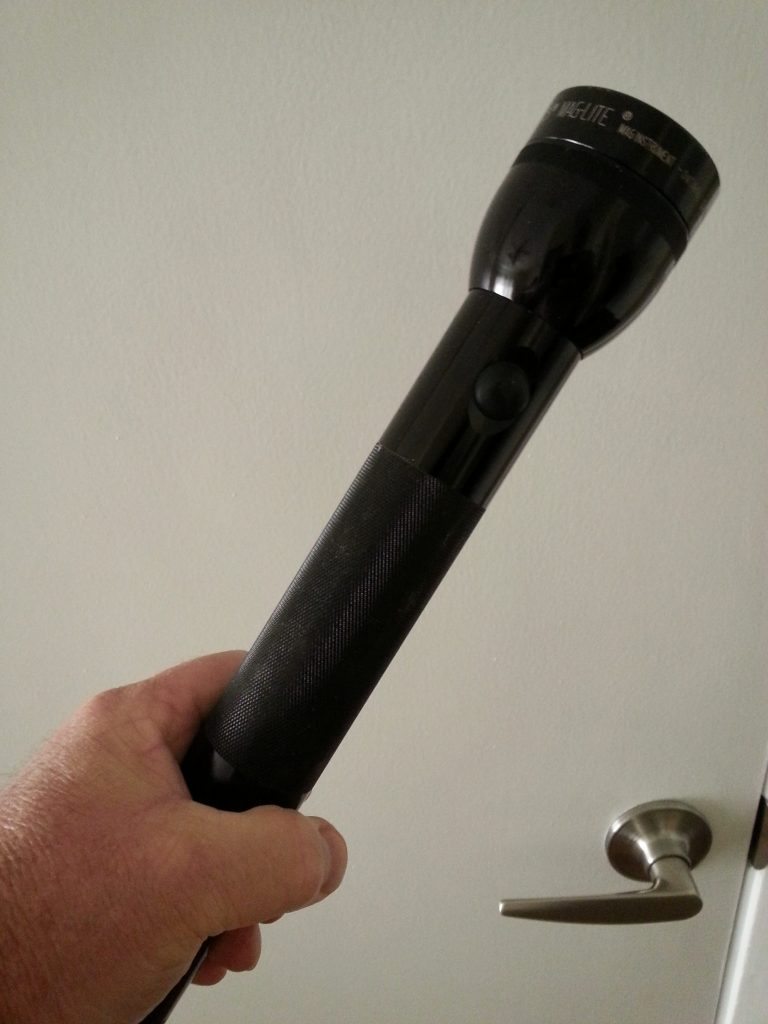 Inside was a waist-high pile of clothes. For some reason I poked the pile with the flashlight, and without warning up popped the shooter, wild-eyed and with gun in hand. A really big gun.

Well, let me tell you, he scared the pure, teetotal crap out of me, and my reaction was to firmly plant that flashlight directly between the suspect’s eyes. He went down. Out cold.

So we collected his gun and carried him outside to waiting EMTs.

The standoff was over and so was my first night at work.

The sheriff and chief both came over to congratulate me for a job well done.

The sheriff held out his hand for shaking and said, “I could use a good man like you. If you’re ever looking for a job let me know.”

I guess he didn’t remember hiring me.

Of course, he also didn’t remember my name when he attended my academy graduation a year later.

So yeah, that was my first day on the job. How was yours?