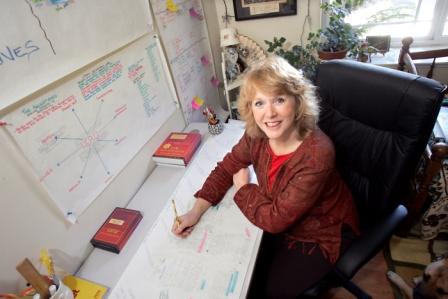 Martha Alderson, M.A. is an international plot consultant for writers. Her clients include best-selling authors, screenwriters, writing teachers and fiction editors. Her own fiction writing has won attention in several literary writing contests, including a finalist in the Heekin Foundation Prize and a semi-finalist in the William Faulkner Writing Contest.

Five years ago, Alderson began teaching plot workshops incorporating sensory feedback for full discovery and ease in learning. With the help of this communications leader, children and adult writers of all skill levels now grasp the elusive concept of plot and are able to use it effectively in their own works of fiction. She takes readers and writers alike beyond the words and into the very heart of a story.

As the founder of Blockbuster Plots for Writers, Alderson created a unique line of plot tools for writers, including the Mystery Writers Plot Planner Workshop DVD. She teaches scene development and plot workshops privately and at writing conferences.

I’m thrilled at this opportunity to share the page with so many outstanding resources and creative people. This new offering of yours, Lee, inviting all of us to post on your blog is such a reflection of you and your generous spirit. You are an amazing person. Thank you so much. If you’d ever like a free plot consultation, just say the word. My pleasure…….

Recently, I produced the first plot workshop DVD for a two-DVD set for mystery writers. The mystery novel I used as an example was Folly, by Laurie R. King. I chose this book not only because of all the mystery subplots involved in the story, but also because it’s a fine example of a character-driven (as opposed to action-driven and/or theme-driven) story.

At fifty-two, Rae Newborn is a woman on the edge: on the edge of sanity, on the edge of tragedy, and now on the edge of the world. A celebrated artist, she has moved to an island at the far reaches of the continent into the house she inherited form her mysterious great-uncle. Isolated from the outside world, Rae will finally come face-to-face with the feelings that have long torments her-panic, melancholy, and the haunting sense that someone is watching her. Before she came to Folly Island. Rae believed most of things she heard existed only her in mind. Now, as she rebuilds her life as well as the house, she finds her story and that of her dead uncle beginning to intertwine.

The mystery plot lines in this example are many: who killed Rae’s great-uncle, who is on the island with her, who raped her, and who killed her husband and daughter. The character development plot line starts with a woman on the edge of sanity and, because of everything she experiences throughout the book, ends with a woman transformed at depth.

Mysteries, thrillers, and suspense novels usually rely more heavily on action-driven plot rather than character-driven. Yet, the definition of any truly great story involves, at its core, character transformation.

Folly has several plotlines beyond the character emotional development plot lines for Rae and for her great-uncle, each of which creates an exciting character study with lots of mystery and suspense, conflict and tension. The two major mystery subplots keep the reader guessing. Because of the deaths that take place in Folly, the protagonist often interacts with the police.

Sam Escobar is the sheriff back home in Santa Cruz. Jerry Carmichael is the San Juan County sheriff Rae deals with on her great-uncle’s island in the Pacific Northwest. Both of these characters employ police procedures, which at the times of my first, second, and third readings of the book read flawlessly. Not having any experience with police procedures, police firearms, police reports, police lineups, and the like, I now wonder how King came up with the authentic details she used in her book, many of which provided essential plot points throughout the story. If she were writing the story now, she could turn to Lee’s amazing blog. But, the book was written six years ago and leads me to believe she must have had to rely on her imagination and/or lots of research.

My passion is to help writers with plot. I have analyzed the plot and structure of countless books, ranging from children’s picture books, to young adult novels, memoirs, mysteries, romance novels, suspense and thrillers, mainstream, and the classics. With such a narrow focus and obsession, I am known by my students as the plot queen and, in the blogisphere, as the plot whisperer. By plot, I mean a series of scenes that are deliberately arranged by cause and effect to create dramatic action filled with conflict, tension, suspense and/or curiosity, to further the character emotional development and provide thematic significance.

Mystery writers have an advantage over other writers in that conflict, tension, suspense, and curiosity are inherent in the genre. Writing mystery has another advantage. The overall story goal is a given to solve the mystery. Classic right-brained writers are often “spoken to by the muse” through the character development. Right-brained learners can struggle creating concrete goals for the character. Goal setting for classic dramatic action writers, on the other hand, is a breeze.

Most writers have a preference for one style of writing over another. Some writers are more adept at developing complex, interesting, and quirky characters. Others excel at page-turning action. The lucky writers are good at creating both the Character Emotional Development plotline and the Dramatic Action plotline. Become aware of your strengths and learn to address your weaknesses, and you, too, can become one of the lucky ones.

Writers who write character-driven stories tend to focus on aesthetics and feelings, creativity and imagination. These writers access the right side of their brains and enjoy playing with the beauty of language. They are intuitive, and like to work things out on the page. Character-driven writers are holistic and subjective. They can synthesize new information, but are somewhat (or more) disorganized and random. They see the story as the whole. Right brain writers may know what they mean, but often have trouble finding the right words.

Take the test to see whether you are stronger at developing Character Emotional Development plot lines or Dramatic Action plot lines.

Fill in the Character Emotional Development Plot Profile below for your protagonist (the character who is most changed by the dramatic action), any other major viewpoint characters and, if there is one, the character who represents the major human antagonist for the protagonist:

1)  Protagonist’s overall story goal (this goal often changes because of the event that triggers the End of the Beginning-around the ¼ mark of the overall page count-and catapults the protagonist into the heart of the story world itself – The Middle. If so, list both story goals and answer #2 & 3 for each goal):

2)  What stands in his/her way of achieving this goal:

3)  What does he/she stand to lose, if not successful:

A) Writers who filled out 1-3 with ease often prefer writing Dramatic Action.

B) Writers who filled in 4- 10 with ease often prefer Character Emotional Development.

C) Writers who filled in everything with ease are often adept at creating both the Dramatic Action and the Character Emotional Development plot lines.

Without a firm understanding of points 1-3, you have no front story. The Dramatic Action plotline is what gets the reader to turn the pages. Without dramatic action there is no excitement on the page. Most mystery writers fall into this category.

Without a firm understanding of points 4-10, you are more likely to line up the action pieces of your story, arrange them in a logical order and then draw conclusions. Yet, no matter how exciting the action, this presentation lacks the human element. Such an omission could increase your chances of losing your audience’s interest.

Yes, at the heart of every good mystery is a protagonist strong enough to stand in the midst of chaos and death, fear and uncertainty, and stay with the case until the mystery has been solved. Still, the more a character is moved and changed, at the least, or transformed, at the most, by the dramatic action, the stronger the readers’ identification with the story.

For more plot tips, go to http://www.blockbusterplots.com/. My blog: http://www.plotwhisperer.blogspot.com/ has not only my plot tips, but other writers’ comments lend an added benefit for more well rounded input and advice. Happy plotting. 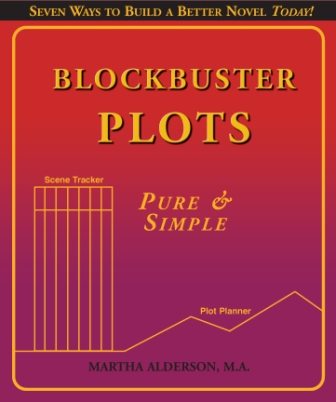