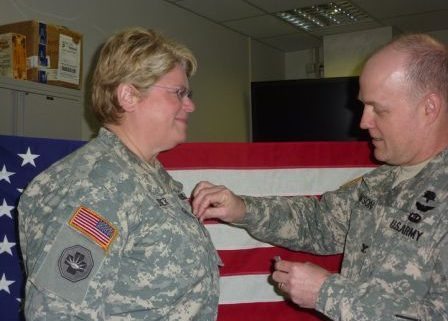 Lieutenant Colonel Martha Bauder started her career as an EMT/Firefighter and later moved on to study medicine at the Med Coll of WI. She completed her residency at Michigan State University/EWSparrow hospital in Lansing, MI. and began working at Sinai-Samaritan Emergency Department, Fond du Lac Regional Hosp, Fond du Lac, WI. Martha joined the U.S. Army Reserves in 2006 and deployed to Iraq in 2008 and again in 2009. She served in Afghanistan in 2010 and in Germany in 2011.

LTC Bauder is currently retired except for her remaining Reserve obligation and resides in Chandler, AZ. Since discovering she’d suddenly turned into an OLD WOMAN after all the time she’d spent in the desert, Lt. Colonel Bauder, with the support of her writing group, The Combat Coven (best not to ask about the name), has written and published numerous short stories related to WWII.

What’s It Like Working In a Combat Support Hospital In a War Zone?

Well, it’s like nothing you have ever seen or could imagine. Even after practicing as an emergency physician for twenty years in community hospitals, I couldn’t imagine it until I actually experienced it over the course of three deployments totaling nearly two years.

Take a mental snapshot of your local hospital. Got it? Good. Now shrink the hospital down to the size of a small clinic. Hmmmm….shrinking…..okay? Next, pick it up and move it to a desert, where there is nothing for miles around but hot burning sand, hot blowing wind, under a white hot sun. Sorta sounds like Arizona, doesn’t it? Not quite. At least the desert of Arizona has vegetation, cacti, wildlife. 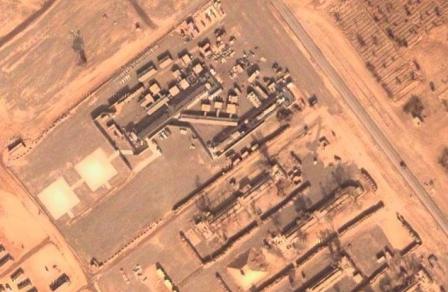 Remove the walls from your imaginary hospital and replace them with canvas. Not liking the picture that you’re starting to get, are you? Every hospital, no matter how small, needs bathrooms.

So, add a unisex latrine at one end of the length of the hospital. Three toilets that may or may not flush, depending on the weather and whether one tank has been filled and the other emptied recently. Don’t try to drink out of the sink with its hot and hot running water – it’s nonpotable, and comes from a huge tank sitting out in the sun. That tank gets filled once a week from a truck that transports the water from a nearby village. It’s heavily chlorinated to kill whatever may be growing in it, and inspectors check the water quality every day during the heat of the sun.

Don’t forget – your hospital has to have an emergency room, an operating room or two, and somewhere to hold the patients. So, starting from the front door, we have the EMT – or Emergency Medical Treatment ward, holding 7 litters (not beds, not cots, but rolling litters – easier to get patients out of the helicopters if you can roll the litter right up to the door of the bird). 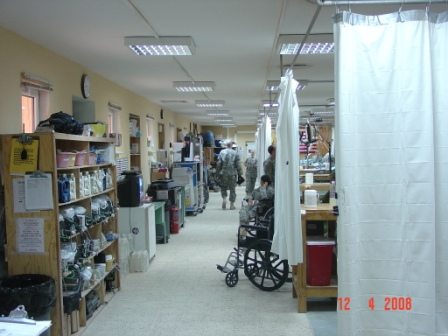 What about equipment? Behind sheet-covered cabinets are a scarce supply of bandaging materials, chest tube trays, central IV kits and peripheral IV setups. Sheets cover the cabinets in a vain attempt to keep out the ubiquitous dust which permeates every crack and cranny. In one corner is an outdated EKG machine, and in another is a hand-held ultrasound machine with a screen about 3 inches across, used for doing quick assessments on trauma patients. The EMT is staffed with two nurses, a handful of medics and one doctor, no matter how many patients may get dropped on them at one time.

Now, out the back door, turn to the left and enter the adjacent tent – otherwise known as the OR. There is a curtained entryway, again to limit the dust, but the three OR’s (two in one cubicle, one by itself) require constant vigilance and cleaning to keep dust to a minimum. And flies. There are always flies. The concept of sterility is lost in a CSH – the best we can hope for is sanitary, with fly strips hanging everywhere to catch the little buggers. 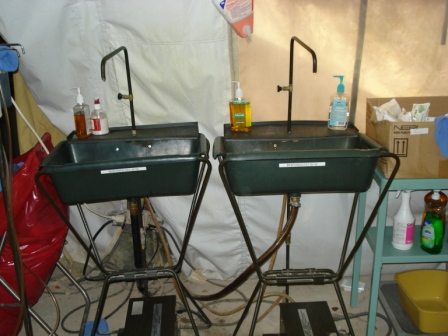 Water for the surgeons to scrub is foot pumped into the portable sinks from canisters stored underneath and refilled after every few patients. Portable lights illuminate the surgical fields. Air conditioning units are so loud that the surgeons have to shout for instruments to make themselves heard. And the scrub techs carry their weapons into the OR…just in case. It’s hot and sweat drips from the surgeons’ foreheads. What AC unit can keep up with 120 heat when there are no walls, only canvas? 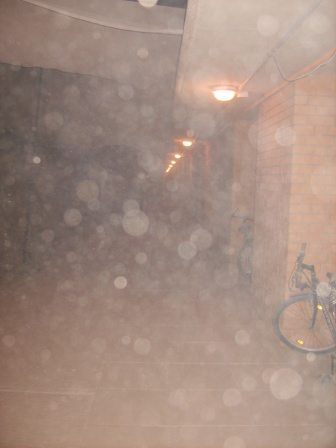 Back outside, straight ahead is the ICU, where post-op patients, or critically injured patients waiting for surgery, are placed. At least the ICU is in a fixed building, not a tent. That helps reduce the dust, but the doors don’t fit properly and in a dust storm, the wind blows them open. Just like in the ER, there is a constant haze in the air during a days-long dust storm. The ICU has a TV, not to receive channels, but so that the patients (and staff during slow hours) can watch movies. The patient turnover is either feast or famine – feast when there is a mass casualty incident; famine when all of those patients have been shipped up-range to Germany. 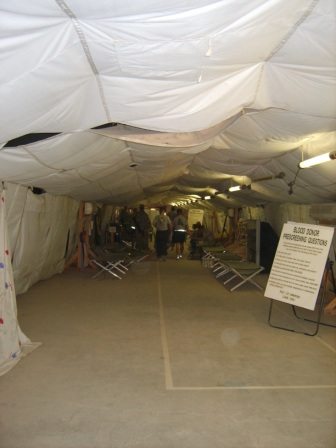 Right down the outside corridor is the PLX tent – Pharmacy, Lab, X-ray. This is the heartbeat of the CSH, where all of the important work is done. Two CT scanners are either humming along nicely or broken because of the dust. Hopefully they won’t both go down at the same time, although it has happened frequently in the past. The PLX tent is also a social gathering spot of sorts – the chaplain has arranged bookshelves along the length of the tent, and soldiers waiting for procedures or meds can pick and choose, or leave one if they’re finished with it. On Wednesdays, the chaplain’s assistant breaks out the bread maker and bakes up a loaf of the most delicious bread you’ll ever taste – probably because the food on the base is otherwise bland and repetitious. There is also a physical therapy corner where the staff can jump on the lone exercise bike in the middle of the night if there are no patients. 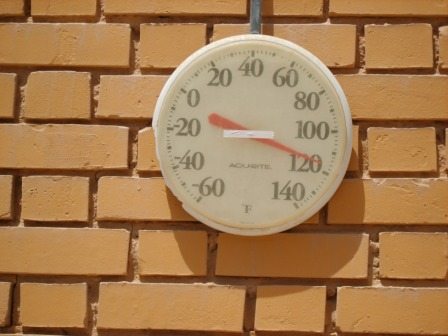 So, how does this place run? It’s 120-130 degrees in the summer, with no ability to make ice or cool water other than one small apartment-sized fridge tucked into a corner of the EMT. The staff all carries beepers (or an overhead page announces casualties), and the dreaded, “MASCAL! MASCAL! All personnel report to the hospital” announcement sets everyone scurrying to his or her place, just like we practice in the dress rehearsals (mass casualty drills). 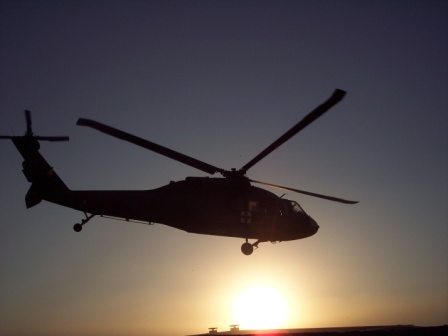 Helicopters, two at a time, each carrying up to five patients depending on severity, land on the pad outside the EMT. The medics wheel the litters out empty and back in fully loaded. Like a well-orchestrated play, each team works on their patient, but all doing the same things – cut the clothes off, insert the IV’s (nurses put in peripherals if there are any extremities to put them in; docs put in central lines in the large vessels of the groin if the arms or legs have been blown away). Simultaneous assessment of airway and breathing, with insertion of an endotracheal tube if necessary is done by the CRNA (nurse anesthetist). Continue the assessment, only stopping to rectify some life-threatening situation (tension pneumothorax, uncontrolled bleeding). Identify anything needing the OR – or send the patient to CT to evaluate their head, chest or belly wounds. Dress the stumps of any traumatic amputations and straighten obvious fractures to stabilize them. All this amidst the confusion of multiple patients all at once, transfusing each of them without mixing up the blood, administering last rites to those who are too injured to survive. Listening to and trying to block out the screams of pain from the patients, shouting down the line asking whether the CT is free, or can I have a surgeon here, or what’s your name, soldier? 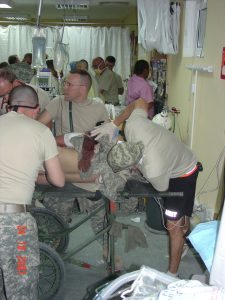 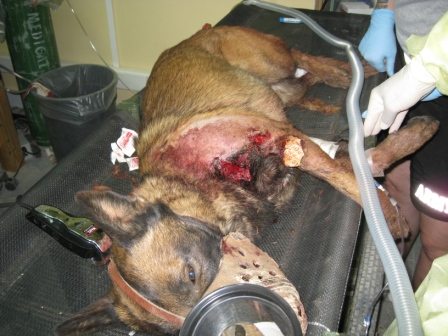 Oh, and two more things to throw in the mix – the next patient that is wheeled through the door is a military working dog. And you WILL work to save its life. Not because you are especially attached to animals, or have any intimate knowledge of how to care for them, but because this dog is a soldier, and likely a hero for saving his handler or the other soldiers in his team. The patient next to the dog? Could be an insurgent who just set an IED and killed three of our boys. But he must be treated for his injuries; treated dispassionately and professionally. 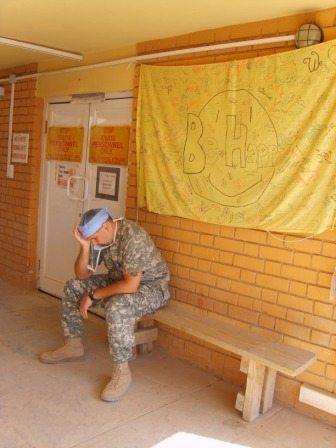 Finally, hours later, the patients have all been stabilized, some have already been shipped back up-range for more definitive treatment, the blood has been swabbed from the deck and you can take a deep breath, knowing that you saved a soldier’s life today. But don’t rest on your laurels – the beepers are already going off again for a Humvee hit by an IED with multiple casualties. Grab your gear, soldier, and get back to work! 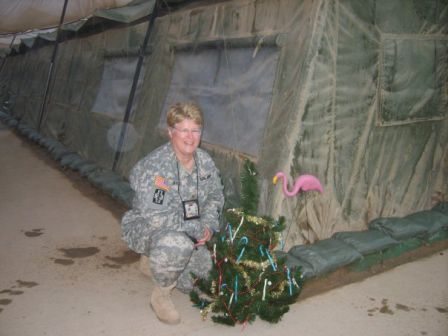