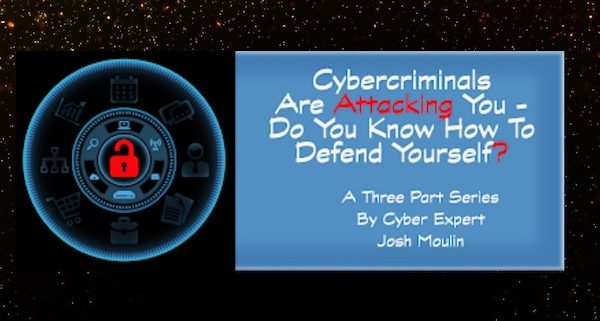 The following was originally posted to the blog site of author L.A. Sartor. She and Josh were kind enough to allow me to share this extremely cool bit of knowledge with you. By the way, many of you will remember Josh from his wonderful cybercrime presentations at the Writers’ Police Academy, and from his fascinating articles here on The Graveyard Shift.

I’m incredibly honored that Josh Moulin, who was my cyber expert for Forever Yours This New Year’s Night, responded with a “yes” when I asked him to do a series on what is a cyberattack, how to recognize them, and how to protect yourself.

Take it away, Josh. 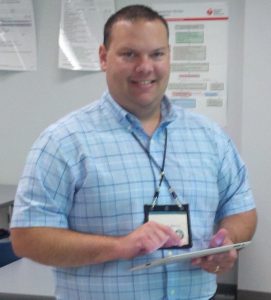 Cyberattacks and data breaches are unfortunately commonplace in the daily news cycle. Many of us have had our personal, healthcare, and financial data breached so much that we are used to receiving letters notifying us of unauthorized disclosures or getting signed up for yet another credit monitoring service. Cybercrime is out of control and the most infuriating part is that most of the attacks are not sophisticated or require an expert hacker. Indeed, most of the successful attacks use the same modus operandi that they have for a decade.

The fact that the majority of attacks are not sophisticated is as troublesome as it is helpful. Since we know what most attackers do, it makes the identification and prevention of these attacks easier. Individuals and small to medium businesses often assume (incorrectly) that if the United States Federal Government or massive corporations such as Home Depot, Anthem, Yahoo!, Target, and Equifax, who spend millions of dollars each year in cybersecurity can’t keep hackers out, then there is no possible way they can defend themselves.

It is true that many cyberattacks are easily preventable and only effective because mistakes have been made which create vulnerabilities. However, it is also true that this world has nation-state military units and sophisticated hackers which target government agencies, universities, corporations, and high-value individuals. When a skilled attacker has set their sights on a victim and has the means, opportunity, and intent to launch a cyberattack against that victim, these attacks may use techniques, tactics, and procedures that are highly complex and extremely difficult to detect. For the purposes of this article, I am not discussing these advanced attacks.

In this first blog post of a three-part series, I am going to focus on the cyberattack kill chain and lay the foundation for how cyberattacks happen. The focus audience of this post is individuals who are trying to protect their personal devices and data from cyberattacks. The next blog post will discuss the most common attacks and how to spot them, and finally I will discuss preventative strategies that people can take including security software, configurations, and backup strategies.

Cyberattack Kill Chain
Each cyberattack goes through a series of steps to accomplish its mission. Depending on the target, mission objectives, and abilities of the attacker this kill chain may happen very quickly or may take months to years to accomplish. Sometimes an attack is to simply disrupt a business competitor or political adversary. Attacks like this are generally carried out through Distributed Denial of Service (DDoS) attacks or website defacement. Other attacks are performed with the intent of gaining intelligence about a competitor or government agency, and yet others are to steal intellectual property, harass someone, or to support a political ideology (hacktivism).

The attack kill chain is comprised of the following steps:
1. The target is defined: This may simply be a target of opportunity (e.g., a person in close proximity to a hacker that has a vulnerable mobile device) or could be targeted due to the person’s position, the value of their data, etc

2. Reconnaissance: The attacker begins to research the target. What information is available via public open source intelligence (OSINT) such as Facebook, LinkedIn, Google, public databases, etc. What IP addresses are assigned to the target, what operating systems do they use, and are there any known vulnerabilities for the target’s Internet connected systems?

3. Weaponization: The attacker develops their weaponized attack, which is generally malware (malicious software) such as a Trojan horse, virus, ransomware, worm, etc. or may utilize a previously unpublished exploit known as a zero-day (0-day). The weapon must be able to exploit a vulnerability, which is what the attacker discovers during the recon stage.

There are several ways to make yourself less susceptible to a cyberattack, such as reducing the attack surface, target hardening, and learning how to identify potentially dangerous situations online or in emails.

An author is putting their finishing touches on their latest work in preparation of sending it off for review. This author is somewhat controversial and critics are anticipating the release of the new book, posting negative comments all across the Internet. A hacker decides to make a statement by attempting to hack this author’s computer and disrupt the author’s ability to publish the book as well as steal a copy of the book before it is released. Step 1, target acquisition is complete.

The hacker begins by finding out as much as possible about the author through social media, Internet posts, interviews, and any other source of OSINT. The hacker is able to determine through social media that the author has a daughter in the fourth grade and because of geotagged photos posted of the author’s daughter, the hacker determines what school the daughter attends. The hacker now downloads the logo of the elementary school as well as an offline copy of the school’s website. Step 2, reconnaissance is complete.

The hacker obtains a variant of ransomware from a hacker website and places the malicious code on a server controlled by the hacker and sitting inside of Amazon Web Services (AWS). The malicious code is just waiting to be downloaded and executed by anyone who visits the server. Step 3, weaponization is complete.

Next, the hacker drafts an email using the same logo, colors, and “look and feel” of the elementary school’s website. The hacker addresses the email to the author’s email address (which was obtained via Google) and sends an email to the author during school hours that there has been an active shooter incident at the school. Included in the email is a link that tells the author to click for further details.

As any parent would, the author clicks the link of the email. When the author clicks the link, they are directed to a webpage that looks exactly like the school’s site. They receive some bothersome pop-up that the don’t read because they are terrified about their child’s safety and just click “ok” to close the window and see what is going on at the school. In reality, when the author clicked the link they navigated to a fake site hosted by the attacker and their computer downloaded the ransomware code. When the code attempted to execute, a pop-up appeared asking for administrative privileges to execute the code. When the author clicked “ok” they just executed the ransomware on their computer. Steps 4, 5, and 6 (delivery, exploitation, and installation) are complete.

The ransomware on the author’s computer begins immediately encrypting data on the hard drive and searches the drive for any .doc or .docx files, compresses them, and exfiltrates them to the attackers C2 server located in AWS. The author has now lost their latest manuscript and cannot access any files on their computer due to the ransomware encryption. Steps 7 and 8 (C2 and exfiltration) are complete.

This scenario is exactly the kind of targeted social engineering attacks that occur on a daily basis and are extremely easy to perpetrate. In future blog posts I will discuss how to recognize attacks and how to harden your systems to try and prevent malicious activity. 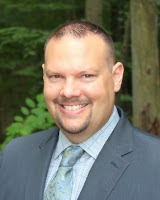 Josh Moulin serves as a trusted advisor to federal government IT and cybersecurity executives with the world’s leading IT advisory and research firm. Previously, Moulin was the Chief Information Officer for the Nevada National Security Site, part of the U.S. Department of Energy’s Nuclear Weapons Complex and before that spent 11 years in law enforcement including 7 years as the commander of a cybercrimes task force.

Moulin has a Master’s Degree in Information Security and Assurance and has over a dozen certifications in law enforcement, digital forensics, and cybersecurity including as a Certified Ethical Hacker. For more information, visit JoshMoulin.com or connect with him on LinkedIn or Twitter.

If you love stories filled with suspense, adventure, fighting against all odds and winning love, then please click here to visit the website of author L.A. Sartor. You’ll be glad you did! 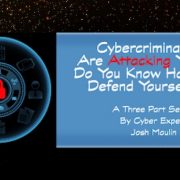 Josh Moulin: Cyberattacks And How To Protect Your Computer and Data – Part 2

Josh Moulin: Cyberattacks And How To Protect Your Computer and Data – Part 3
2 replies

Josh Moulin: Cyberattacks And How To Protect Your Computer and Data –...
Scroll to top