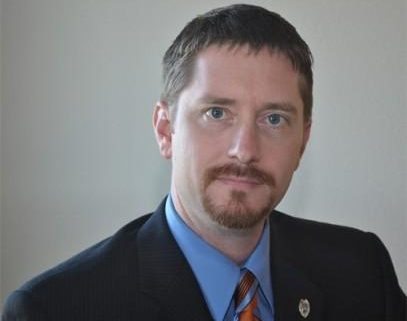 Hello and welcome to the Fox Valley Technical College Public Safety Training Center (PSTC). Hopefully this blog post will entice you to come to the next Writers Police Academy and get to hear me say that in person. Until then let me give you a little history and virtual tour of this amazing facility.

The PSTC is located just outside Appleton, WI. It is a stand-alone campus that is part of Fox Valley Technical College. Here in Wisconsin the counties are divided up into 16 districts. Each district has a tax supported technical college. The majors at the technical college range from Agribusiness, Nursing, Manufacturing Apprenticeships, Culinary Arts, and yes, Criminal Justice.

In addition to the Associate Degree programs the technical colleges are also the certifying bodies for a number of professional fields. We run the Police Academies, Fire Academies (for both paid and volunteer firefighters) and National Registry for EMT/Paramedics. It is the certifying of Police, Fire, EMS that is the core of what the PSTC was built for.

We built the PSTC with about $36 Million dollars that came from a public referendum. There have also been a number of large donations from businesses to help offset some construction costs. Believe it or not, the vote was 76% in favor of giving us the money. Seriously, when was the last time that many people voted to have their taxes raised?

The facility sits on 76 acres of land adjacent to the Appleton airport. The site boasts a 90,000 sq. foot classroom building. Inside are two shooting ranges, a forensic lab, jail-training center, two self-defense training rooms, a gym, a dispatch center, and multiple general classrooms. In addition the building has a fire apparatus bay that is capable of not only parking fire engines, but also having ladder trucks raise their ladder inside. We have some cold winters in Wisconsin so it is nice to training ladder work and rappelling inside. 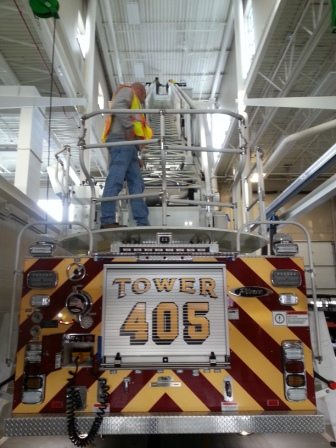 Outside the classroom building is a mock village we call “River City.” Yes, that name is a little shout out to the Music Man. Currently, River City has two houses, a bank, a motel with lobby and bar, and a gas station. In the future we will be adding more buildings on some of the open green space. The buildings are outfitted with real furnishings like any home or business. We can and do simulate all kinds of emergency response calls to River City, meaning come August you might investigate a bank robbery at our bank, or a murder at the motel. The possibilities are practically endless. 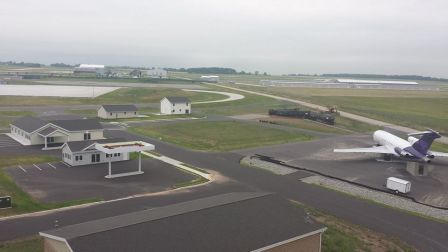 Our Fire program has multiple specialty buildings outside the classroom building. The highlight of the fire props is the six-story burn tower. Our fire program also features a ladder training tower, a three-story structure to run many different ladder drills on. In addition to firefighting we teach technical rescue, so we have a mound of dirt containing over 400 linear feet of swear pipe for confined space rescue.

Everyone who gets a chance to meet me will learn that I was both a police officer and firefighter in my professional career. As a police department evidence technician with a fire service background I was quickly found myself as a fire investigator. So when building the PSTC because of my background I made them put in four arson pods. Basically a cinder block building that has four identical rooms in it to set fires in.

Also in the outdoor area is a set of four shooting ranges. We have two fifty-yard ranges, a 125-yard range and a 300-year sniper range. 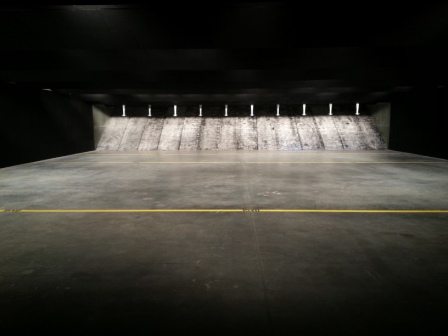 Next to the outdoor shooting ranges is our driving track. The heart of the driving track is a 5-acre skills pad where we set up all the cone courses most people think of for driver training. Around the skills pad is a 5/8-mile loop that simulates a divided highway, banked interstate corner, and section of plain, straight city street. Oh, and I’d better not forget that no police driving track is complete without the famous skid pad—a section of asphalt that is pure flat with no aggregate in it that we wet down to make as slick as ice. Just the slightest turn of a steering wheel can cause a car to spin out of the skid pad.

Finally rounding out the outside area we have train derailment and an airplane. The train derailment can be used for a number of scenarios from hazardous material response to police crash investigations. Our plane is a 737 complete with a full passenger compartment. It is mostly used for EMS and Fire training but, while we have featured some Law Enforcement training on the plane, the guys in black suits with dark sunglasses said I couldn’t say anymore about that.

The last outdoor prop of note is the pond. The pond depth is maintained at a level between 20-30 feet, which mimics a number of lakes close to our campus. We’ve placed a car at the bottom of the pond and might be placing a second one later on. Here we can practice underwater CSI skills and also dive rescue. In addition, due to the rural nature of Wisconsin, many fires occur in areas without nearby fire hydrants. Therefore, fire departments need to draft water from local lakes, ponds, and rivers, and our pond provides the necessary training to do so.

Anyone who has been to our facility comments that photos and directions like this posting simply does not give it justice. I hope I have wet your appetite for the WPA in August and you will come see us for yourself. Until then I look forward to greeting you all!

Joe LeFevre has worked as both a police officer and firefighter during his professional career. He has held positions as a police officer, patrol supervisor, field training officer, evidence technician, firefighter II, fire department engineer, and fire investigator. He is currently the Forensic Science program coordinator at Fox Valley Technical College in Appleton, WI.

Dr. LeFevre is also an author who’s published nonfiction in both book form and various magazines. He’s a contributing author for publications such as PoliceOne, and his first mystery is scheduled for release later in 2015.