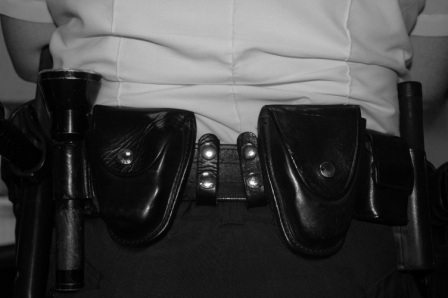 It was Friday the 13th, the most feared day of the year. The sky was clear and blue in Richmond and the electric sign on Monument Avenue indicated the temperature was a balmy 94 degrees. I was assigned to patrol the Fan District, an area so called because of the fan shape layout of the streets there. My first call of the day was a 911 hang-up. We had to check those in case the caller was in trouble and couldn’t speak. Typically, we learn that some kid was playing with the phone, or that someone hit the wrong button on the speed dial, but it’s part of the job so we do it.

I arrived on-scene at 0830. My name is Jinx…Officer Issa D. Jinx. I’m a patrol officer.

As I suspected, a little snot-nosed, 4-year-old rug rat named Seymour had the phone in hand and, judging from large number of gaudy do-dads positioned throughout the living room, was playing dial-up QVC like he’d seen his mama do at least a thousand times before. Mama Rug Rat apologized for the call and yelled at the kid. I cleared the scene at 0840. That’s when I noticed the burning sensation on the part of me that contacts my car seat. In a matter of minutes it felt as if my butt was planted firmly inside a blast furnace.

I made a left into the parking lot of the Museum of Fine Arts. It was closed but I had a buddy who worked there as a museum police officer. I knew he’d let me in so I could use a restroom to have a look at whatever was going on. By the time I’d reached the front door of the museum my legs had also begun to burn. Ever been scalded by boiling water? Well, this was that times ten.

I stood there knocking for a couple of minutes, but while waiting (and rubbing my legs), I felt a lipstick-size object in my front pants pocket. Darn-it! I’d left a small can of pepper spray in there the night before when I washed and dried the pants. Yep, it had exploded while in the dryer. So I then knew the source of the ever-increasing below-the-waist burn. It was relief to know I hadn’t caught some sort of weird and exotic crud from the showers at my gym. I skipped the museum bathroom venture and called my sergeant. He said he’d cover for me while I returned to the precinct for a quick shower and change of uniform. Not a good way to start the say.

1000 hrs. Feeling better and slightly refreshed I responded to a report of a drunk guy flashing his exposed “goods” to the ladies working at the Virginia Historical Society. I arrived within two minutes of receiving the call, but the man was gone and neither of the women could give me a description of his face. They knew other details, in detail, but nothing about his face. I signed 10-8 (in-service) and headed back on patrol.

Thirty minutes later I spotted Johnny “June Bug” Davis hanging out near a Wells Fargo ATM next to the Harris Hall Auditorium on the VCU campus. I remembered seeing a warrant for June Bug so I parked around the corner and walked back. He spotted me and ran for a block or two before I caught him, but he gave up easily. Fortunately, he never was much of a fighter and I’ve never been much as a runner. It worked out well for me. Not so much for him, though, because I hauled him straight to jail where I locked my service weapon into a lock-box and slipped the key into my pocket. The lock-box rule is standard at all jails. The rule is to prevent prisoners from grabbing an officer’s gun.

Jail staff booked June Bug and placed him into a packed holding cell with a gaggle of other folks waiting to be classified. As luck would have it, he was there in time to receive a bag lunch, a cold cheese sandwich—dry, hard cheese between two slices of stale bread—and a juice box.

Before I hit the streets again I decided to take advantage of the jail’s employee restroom. A crusty old captain once told me to never pass up an opportunity to use the restroom or to grab a bite to eat, because you never know when you’ll catch a call that ties you up for hours, or maybe days. Believe me, there’s nothing worse than standing guard over a corpse in the middle of the night while having to pee. Can’t contaminate the scene, you know.

So I went through the ritual of unsnapping the belt keepers, unhooking my gun belt and hanging it on a hook attached to the stall wall, and then settling in to take care of business while reading a wrinkled copy of the Richmond Times Dispatch. It was a week old but it was better than counting the speckles in the floor tile.

I’d read exactly two paragraphs in a story about women who’d hit the lottery three times and now lived in a RV with no electricity, when a bank robbery call came sputtering through the speaker in my portable radio. The two suspects were armed, one with a handgun and the other with a sawed-off shotgun. I quickly ended my business, clipped everything back in place, and then sprinted to my patrol car where I signed 10-17 (en-route). I flipped the switches activating my lights and siren and spun tires leaving the jail lot. The bank was only a few minutes away from my location.

As I made my first left dispatchers broadcasted a description of the suspect’s car. I made another left and then a right and THE car passed me heading in the opposite direction. I called it in and turned around. Believe it or not, as I got closer the car pulled over and stopped. There’s was no movement from inside. They’d shut off the engine too. Dark, tinted windows all around. It was graveyard quiet and still. Creepy. Very creepy. The hairs on the back of my neck were at attention, every last one of them.

I called for backup and eased my car back just a bit, angling it to place the engine block between me and possible gunfire from the bad guys. I was about to step out of the car when it hit me like a one of those Road Runner-pushed boulders that land on top of Wile E. Coyote…I’d left my gun in the lock-box at the jail.

I decided to wait for backup before stepping out of the car.

*Of course, Officer Jinx is a fictional character. However, the tale you’ve just read could be true in any city, town, or county in the country. These things could happen, and they do. Don’t believe it? Ask your officer-friends if they’ve ever left their gun in a lock-box only to discover it missing when they need it most. Or, inquire about their various pepper spray mishaps. Yes, partners are sometimes sprayed, and more.

By the way, the pepper-spray incident in the story above…yep, that was me.