Like all rookie investigators, I couldn’t wait to prove my worthiness. I wanted to catch the case that would surely grace the pages of detective magazines and grocery store tabloids everywhere.

I was a brand new detective with a shiny gold badge and several years of experience behind it. Bad To The Bone, as George Thorogood would eventually sing. In fact, why don’t you click on the video below and crank up the volume while reading the rest of this piece. You know, to set the mood …

Being a detective was cool, or so I thought. I even thought of growing my hair a bit longer to get away from the traditional “cop look” and to amplify the level of cool I knew must’ve been oozing from my pores like oil from a newly-tapped well. Some say that once you become a cop you’ll never lose the look, but I was sure going to try.

Standing in my new office, one featuring a desk all to myself and a real honest-to-goodness door with a knob and everything, a door I could close whenever I wanted, I began to unpack the boxes of personal items—notepads, pens, certificates and framed photos for the wall, and a few other cop odds and ends.

As you probably guessed, I’d arrived over an hour early for my shift. I was excited and I’d wanted to have a bit of alone time to savor the moment. And there was I was, experiencing the very same smells, sights, and sounds I’d experienced many, many times before when bringing suspects to the detectives for interviews. But doggone it, from that second forward those smells and sights and sounds belonged to me … and, well, they also belonged to the other detectives who quickly let me know that my stuff was in their way and that I’d parked in the wrong spot and that I was on call the following weekend and that the others had first picks of vacation weeks and that I’d be on call on Christmas and, and, and …  It. Was. Heaven!

The desk phone rang. Uh, oh. How should I answer it? Would it be too presumptuous to say Detective Lofland? After all, I’d only officially been on the job for … uh, ten minutes. But that’s what was on the name plate on the door and the one on my desk. So Detective Lofland it was. After all, according to Mr. Thorogood, when you’re “bad to the bone,” even kings and queens step aside when you walk the streets, so I grabbed the receiver and answered … “Hello.”

Okay, so I chickened out and blew the first opportunity to say my name and new title out loud, but the phone call was from dispatch so it really wouldn’t have mattered to them if I’d said I was Abraham Lincoln or Bugs Bunny. They just wanted to pass along the information and get it off their hands.

The dispatcher said patrol officers requested a detective at the scene of an armed robbery. A cashier at a local convenience store told the uniforms a tall man wearing a hoodie aimed a rusty-looking handgun at her and then demanded all the cash in the register. Since I was the only detective around at the time, I said I’d take this mind-blowingly complex case. Can you sense the paint drying from where you sit? It gets better. They always get better.

Anyway, four or five marked units sat at various angles in the parking lot of the convenience store, all parked somewhat near the entrances. As usual … overkill from a bunch of officers who had nothing better to do other than counting the ticks of the clock while waiting for another graveyard shift to pass by.

I pulled in behind one of the patrol cars and slid out of my well-used but new-to-me Chevrolet Caprice, realizing this was my first assignment wearing a coat and tie. I also realized how wonderfully cool and comfortable I felt as opposed to wearing a uniform and hot Kevlar vest.

The clerk was still a bit hyper and quite shaken (“shaken and stirred” as one of my old captains used to say when describing nervous victims). She said the robber became extremely angry when she couldn’t open the cash drawer on the first try (she said her mind went blank when she saw the gun), so he climbed over the counter and started yanking on the register until it broke free of its mounts and wires. Then he grabbed the register and ran outside across the parking lot to an old blue Ford. As she pushed the panic button to summon police, the robber sped off heading south on Main. 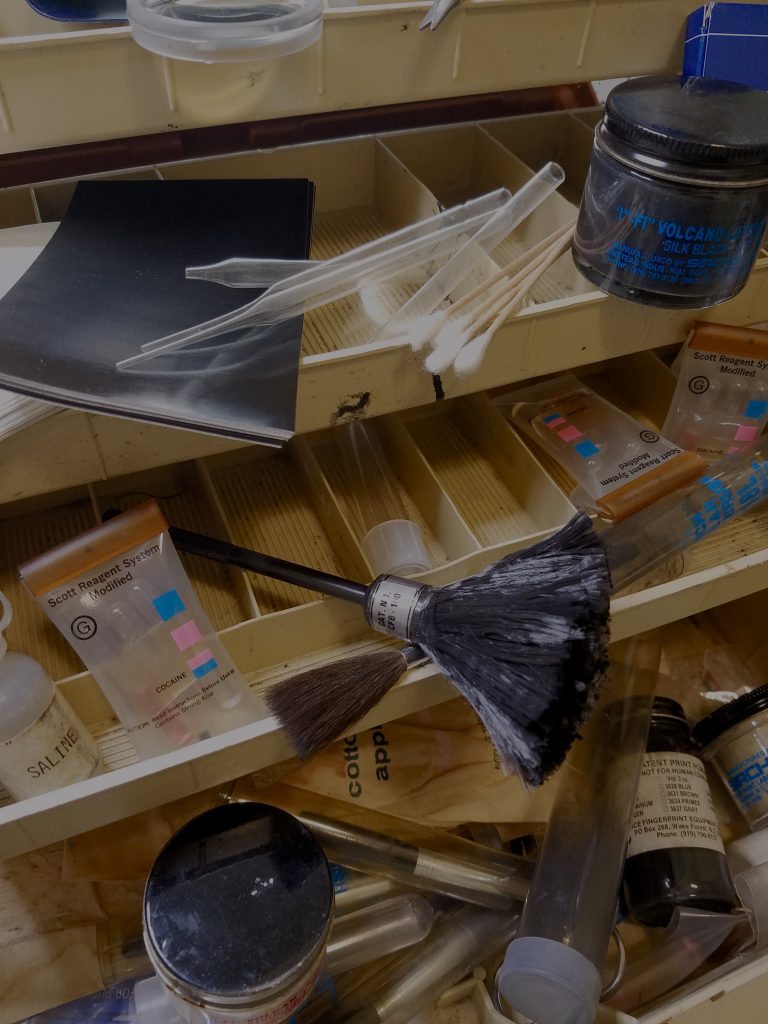 I had the clerk lock the doors to keep out customers and the swarm of looky-loos who’d begun to gather outside, and went to my car to retrieve my fingerprint kit. I didn’t see any need to call out anyone else merely to dust for prints and search for bits of trace evidence that were probably nonexistent.

I set the fingerprint kit (a fishing tackle box filled with powders, brushes, lifters and tape) on the countertop well away from where the register used to be, and then slipped on a pair of blue latex gloves.

That’s when I saw the wallet. It was an older wallet. Well-worn and well-used. The familiar circular print embedded in the leather told me the owner believed in practicing safe sex. I reached down and picked it up, asking the clerk if it belonged to her? I knew her answer before she spoke. It wasn’t hers.

I thought there was no way this could be that simple. However, I opened the wallet, pulled out a Virginia drivers license (back then Virginia used a person’s social security number as their official driver’s license number), and asked the clerk if the man in the picture was the man who’d robbed her. “Yes,” she’d said. “No doubt about it. That’s him.”

The idiot dropped his wallet at the scene of the crime. Duh…

So I packed up my things, pulled the gloves from hands, and headed to my car. I called for backup and then I and a parade of marked patrol cars all drove to the address on the robber’s driver’s license. Lo and behold, parked in the driveway was an old blue Ford. Behind the driver’s seat in plain view, was a nice, shiny cash register. Sitting behind the steering wheel was a snoring, tall man wearing a hoodie. On the seat next to him was an old, rusted revolver with wooden grips. Not only was this crook dumb, he was either too cheap or too poor to get himself a decent weapon.

I opened the car door, slowly so as to not wake the sleeping beauty, and then grabbed the robber’s hand and arm and pulled him outside to the ground where I and a patrol officer quickly applied handcuffs to the robber’s wrists.

I learned later the bad guy had been on the tail end of a two-day crack binge when he robbed the store, probably to get some cash to keep the high going. However, since he was well on his way down, he simply crashed when he arrived home, which made the arrest about as simple and easy as they come.

And the excitement continued. Like the the times when …

I once worked an arson case where the firebug also dropped his wallet at the scene. Again, it was a simple matter of driving to the address on the driver’s license where we found the big dummy at home eating a bowl of Captain Crunch cereal. 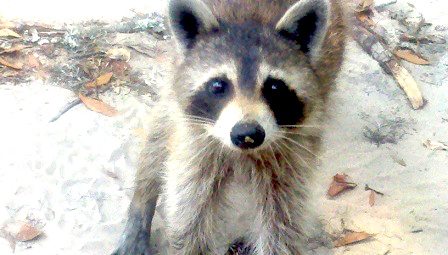 And then there was the time when four teenage burglars entered a business to steal whatever they could haul away. The first little darlin’ made his way to the roof and then slid down a large drain pipe into my waiting arms. I had to send in my dog to nab the others, and nab one he did. Well, let’s just say that my four-legged partner seemed to enjoy the taste of fresh “rump” roast.

Oh, and then there was the man who broke into a store, took off his mask, and walked straight to the surveillance camera, looking directly into the lens before covering it with his stocking cap/mask.

When he finished gathering items he went back to the camera to retrieve his cap, which he used to wipe and rub the recording device (doing away with prints, I suppose), again, staring directly into the lens. I recognized this genius as someone who’d been arrested numerous times for B&E’s. Not the sharpest bandit on the block.

Of course, time marched on and the cases became more complicated than arresting two-bit B&E guys. Soon I had more murder, kidnapping, narcotics, and sexual assault cases than you could shake a stick at, but I’d still occasionally come across one where the crook was, well, let’s just say he was not too bright. So I, and other officers, arrested him over and over again, and he’d go to jail or prison for while to work in the institution’s kitchen or furniture shop until his time was up. Then he’d come home and start breaking and climbing through windows and doors all over again.

Of course, ten stints in the prison woodworking shop and a not-so-bright bad guy could have a difficult time using lock picks and other burglar tools. 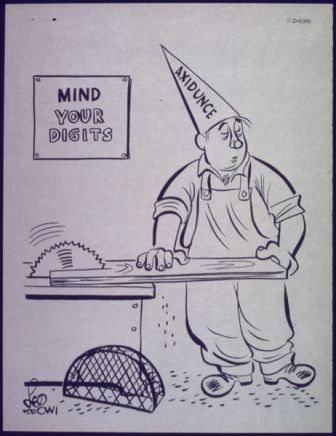 Furloughs: Everyone Needs A Vacation, Even Prison Inmates
Scroll to top