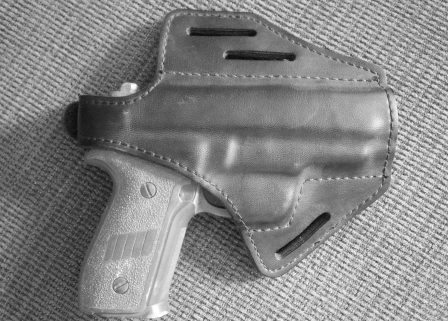 You do your best to make the heroes of your tall tales as cool as possible. They’re the best at everything they do. They can out-shoot, out-fight, and out-think every character who dares to enter a paragraph. Your superstars can drive a car better than Jeff Gordon and Dale Jr. combined, and they’re far better lovers that those shirtless, fake-tan guys on the romance covers. Hell, even James Bond should take “suave and debonair” lessons from your protagonists.

So what’s the problem, you ask? Well, come closer. I think it’s best that I whisper so only you can hear. Don’t want to embarrass your hero, you know.

Okay, here goes, and this is between you and me. The trouble is…is…well, it’s the size of their guns and the way they carry them……..I know, shocking, isn’t it? But I think I can help, and these simple pointers should do the trick.

1. Stop having your good guy shove his handgun into his waistband at the small of his back. It’s not safe, nor is it a handy place for retrieval of the weapon. To better illustrate, please allow me to tell a brief story to help clarify my point.

It was around 3 a.m. and I and another officer were working an undercover narcotics operation. We’d made a substantial buy from a house in a very dangerous part of town and were sitting in my undercover car preparing to leave the area, when we heard a call come across the radio. “Shots fired. One man down, believed to be deceased. Shooter is running east in the alley between Dumb and Dumber streets.”

My partner and I immediately looked at each other. We were sitting at the eastern end of the alley. A second later the shooter zipped past the front of my car.

My partner jumped out to chase the asswipe while I called in our position and to say we were in foot pursuit (so much for the undercover role).

It’s tough to run while wearing a gun strapped to your ankle, but you get used to it…sort of. Anyway, I started running at full speed in the direction I last saw my partner. It was pitch-black dark. No moon. No streetlights.

After what seemed like ten minutes and a total shutdown of my lungs and heart, I heard a commotion. I’d heard the sound before and knew it to be that of humans crossing a chain-link fence. After chasing a dozen or so thugs through backyards and around snarling dogs, those type of sounds become very familiar to you. Anyway, I knew I was gaining on my partner and the bad guy.

All of a sudden I heard a very loud BANG! It was a gunshot.

I reached the fence and climbed over where I found my partner lying on the ground moaning and groaning, with a very large murderer kneeling beside him. The killer was firmly pressing a handkerchief against my partner’s right buttock.

I, totally unsure of what the hell I was seeing, pointed my gun at the bad guy and told him to get down on the ground and keep his hands where I could see them. I was certain he’d shot my partner and was trying to get his gun. However…the handkerchief?

Turns out my partner had shoved his big fat Beretta 92F into his waistband, at the small of his back, just as he started chasing the shooter. And, when he climbed over the fence the gun slipped down inside the seat of his pants and had somehow discharged. In other words, my partner shot himself in the butt.

The murderer heard the shot and thought my partner had fired a round at him, so he stopped in his tracks. However, when the bad guy realized what had happened he turned around, walked over to his pursuer, and began emergency first aid. Go figure.

So you see, the small of the back, without a proper holster, is a very bad place to carry a concealed weapon. Do your hero a big favor and write in a specially designed holster made for that area.

1. The pants pocket. It’s far too easy for the hammer to catch on pocket material, preventing a quick draw. There’s nothing more embarrassing, or dangerous, than having to repeatedly pull and tug on your gun when you most need it. To make matters worse, the pocket material will more than likely rip and tear and come out attached to the barrel. And that, my friends, definitely makes your hero look pretty silly.

2. A woman’s pocketbook. Who knows how much stuff she’d have to paw through to even find her too big and too clunky gun, much less get a grip on it and draw. Besides, you know when the protagonist finally does manage to draw the weapon it’ll be coated with lint, two old lifesavers, two or three dry-cleaning receipts, and one of those things only carried by women. It’s not a pretty sight.

There are many purses and holsters specifically designed for concealed carry. Please buy one for the hero in your stories. They’ll be glad you did.