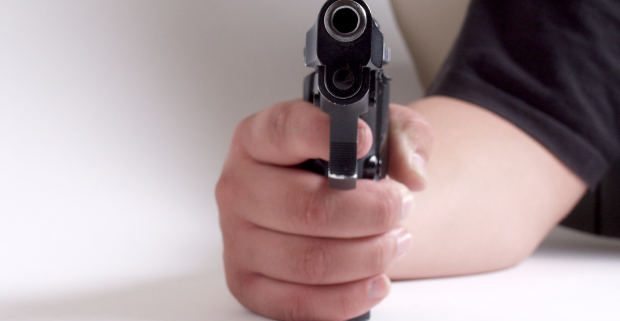 Guns. Whether you love ’em or hate ’em, you’ve got to deal with them. They’re here and they’re not going anywhere any time soon. As writers, though, you probably handle them, if only in your minds, more often than the average person. Therefore, it’s a good idea to know what it is you’re trusting your characters to carry and use as part of their crime-fighting tool box. So, to help your heroes sound as if they really know their stuff, here are a dozen not-so-well-known firearm facts.

1. Not all firearms require official registration under the National Firearms Act (NFA). Those that do include machine guns, short-barrel rifles (barrel less than 16″ in length) and shotguns (barrel less than 18″ in length), silencers, gadget-type firearms (pen and cellphone guns, etc.), destructive devices, and what ATF calls “any other weapons.”

*Any other weapons include Ithaca Auto-Burglar guns, H&R Handy-gun, and cane guns.

2. Dealers who sell gas masks must be registered with ATF. It takes 4-6 weeks for the agency to process the registration paperwork.

3. Parts or devices that are designed to convert a firearm into a NFA firearm must be registered with ATF.

6. The National Instant Criminal Background Check System, or NICS, is in place to instantly determine whether a prospective buyer is eligible to buy firearms or explosives (not a convicted felon or otherwise ineligible). The system is utilized each time someone purchases a firearm from a licensed dealer. NICS is maintained by the FBI. More than 100 million checks have been conducted since the system was initiated. 700,000 of those checks resulted in denials.

7. Muzzleloading cannons are NOT classified as destructive devices.

8. Machine guns may be legally transferred (sold) from one registered owner to another.

(a) projectile or projectile core which may be used in a handgun and which is constructed entirely (excluding the presence of traces of other substances) from one or a combination of tungsten alloys, steel, iron, brass, bronze, beryllium copper, or depleted uranium; or

(b) a full jacketed projectile larger than .22 caliber designed and intended for use in a handgun and whose jacket has a weight of more than 25 percent of the total weight of the projectile.

10. Brandish – to display all or part a firearm, or make it known a firearm is present, for the purpose of intimidating another. “Cops charged my cousin with brandishing a firearm. He’ll do six months in county for this one. It’s the second time he’s done it.”

11. It is illegal for persons convicted of crimes of violence to purchase or possess body armor.

12. Gun sales to foreign embassies on U.S. soil are considered exports; therefore, typical gun sale paperwork is not required. Instead, dealers need to obtain only one of the following – an official purchase order from the foreign mission, payment from foreign government funds, a written document from the agency head stating the weapons are being purchased by the embassy, not an individual. Standard laws apply to individual parties/diplomats.

I’m goin’ home, gonna load my shotgun
Wait by the door and light a cigarette
If he wants a fight well now he’s got one