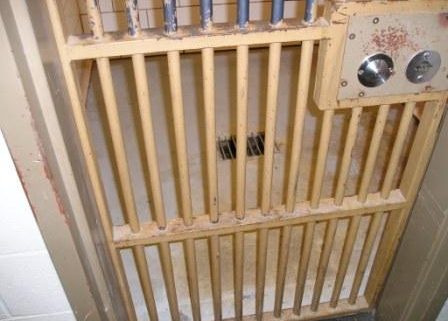 Close your eyes and imagine you’re in the filthiest public restroom you’ve ever visited. Take a deep breath while conjuring up a stench that lingers in places where only roaches and vermin dare to trod. Combine those odors with the scent of dirty sweat socks, t-shirts and underwear, cooked popcorn, urine, and steaming chicken-flavored Top Ramen noodles.

Picture living or working where every breath is similar to what I’ve described above. Never a single lungful of fresh air. Could you drink water from a sink that was used to wash the feet of a man who just finished working on a roadside work gang for eight hours in ninety-degree heat—a sink positioned two feet above a toilet that’s used several times a day by three people, but is only capable of being flushed twice in eight hours?

How about sleeping in a six-by-nine room with two other large men who haven’t bathed in several days during the hottest time of the year. There’s no ventilation. No windows to open. How about sleeping on the floor with nothing between you and the grimy concrete surface but an itchy, wool blanket? Roaches, rats, and mice darting from gaps between rusted plumbing and cracked cinder blocks. Dried blood and vomit are the only splashes of color on drab walls. HGTV it ain’t.

Of course, conditions are better in some facilities than others, but many are just like I’ve described in the paragraphs above. Some are worse. Much worse.

The photos below were taken in one of the cleanest jails I’ve ever seen. It’s also a very well-run operation. The staff is well-trained, and for the most part the prisoners seemed to be in good spirits considering their circumstances. 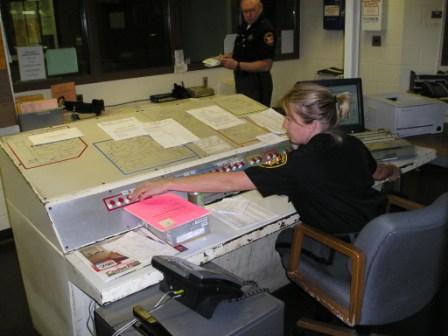 Some prison dormitories house over one-hundred prisoners in a single room. Many times, a single officer is assigned to supervise the activities of one or more dorm rooms. Only non-violent inmates are assigned to dorm-style incarceration. In many federal prisons, dormitory-style housing is quite common, especially in the low-security facilities and prison camps. 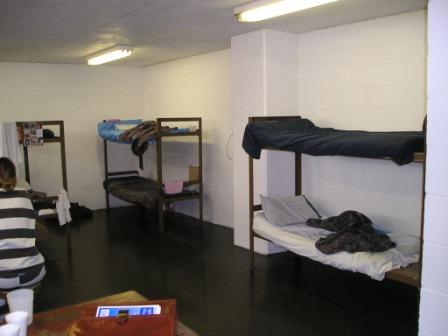 Each inmate is responsible for keeping her personal space clean. Cleaning the overall dormitory is a shared task. 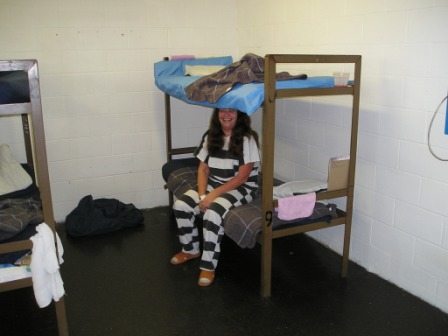 The silver, metallic cable you see on the right is a telephone cord. This jail features a phone in each dorm. Inmates are allowed to make collect calls during approved times of the day only. The phones are switched off from the control booth during the “off” times. 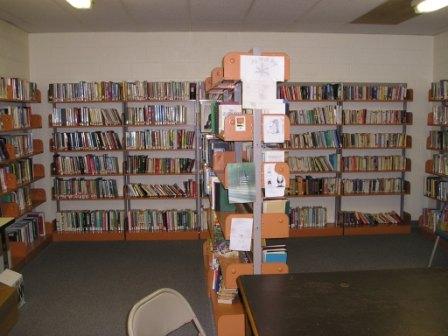 In the photograph below, a deputy sheriff makes his rounds inside a cell block. He’s actually inside a day room that’s normally occupied by several inmates (they were made to go inside their cells while I was inside the day room). The area outside the windows to the left is the common area hallway that’s outside the locked cell areas. The doors to the deputy’s right and straight ahead are inmate cell doors. Each morning those doors are opened, allowing all inmates into the day room where they play cards, watch TV, eat their meals, and socialize. They return to their cells at night. 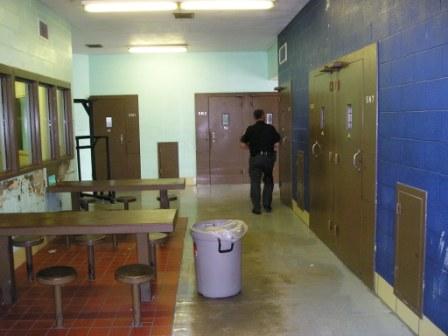 Inmates are not allowed in their cells during the day. Sleeping or lounging on their beds during the day is not permitted. Having all the inmates in the day room also allows the deputies to see their every movement. The only exception to the rule is when an inmate is sick. However, the illness must be verified by a jail nurse or doctor.

An inmate’s view through the window in his cell door out into the hallway. Many dreams and fantasies of life on the outside begin at this very spot. The door across the hall is that of another inmate’s cell. The checkered grate at the top of the picture is the only source of ventilation in the cell. It’s also a means for the jail staff to communicate with the prisoner. Jail doors are heavily insulated to retard fires and noise. 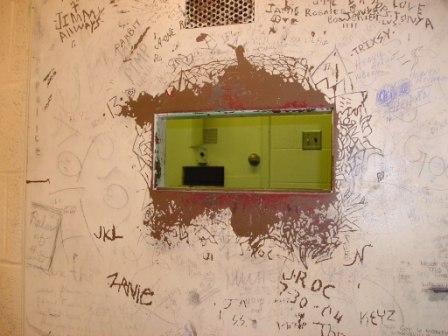 Just as I clicked off this shot, a group of deputies ran past to quell a disturbance in an area I’d just left. The problem—an inmate was having an anxiety attack from being in such tight quarters. He’d become quite violent and was tossing things around. His troubles reminded me of how much I appreciate the little things—trees, flowers, family, home-cooked meals, wine, and flushing my own darn toilet whenever I want. 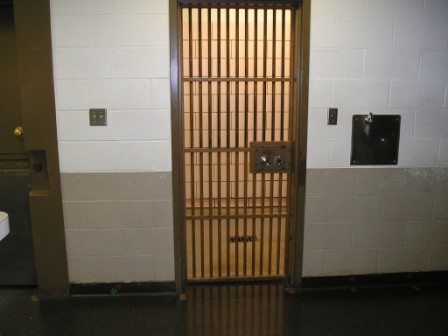 Inmates who commit violations of jail rules, or exhibit violent behavior, are sometimes placed in segregation/isolation. That section of the jail is often called the SHU (Special Housing Unit) or The Hole. 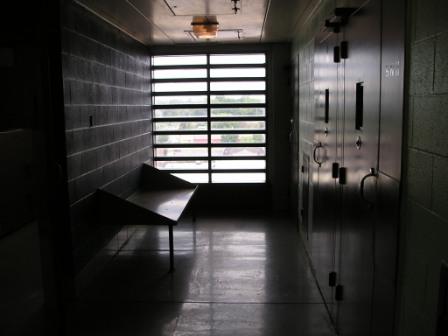 Another answer to overcrowding was to convert the jail parking garage to living space. By bringing in shipping containers (like those you see on cargo ships and the backs of tractor-trailers) and converting them to individual housing units, this jail was able to safely increase it’s capacity by 100 inmates. A chain-link fence circles the mini-compound. 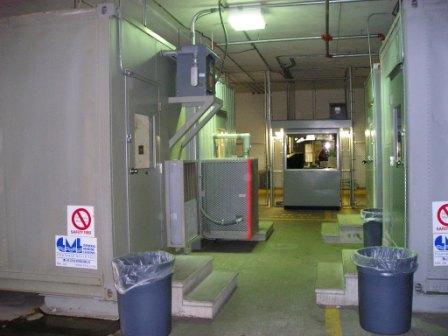 Each module is a self-contained unit equipped with air conditioning. A deputy sheriff monitors the parking garage jail from a small booth positioned outside the fence. Cameras are placed throughout the module areas.

Inside, the modules are narrow, but adequate. Bunk beds for ten prisoners, storage lockers, and a shared writing desk made from a single piece of lumber. 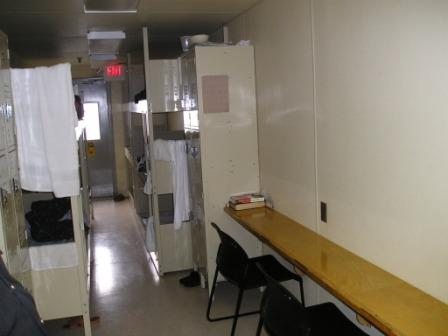 The space between two modules serves as the recreation yard. Remember, just a few months before I snapped these photos this space was a parking garage for the jail staff and visitors. 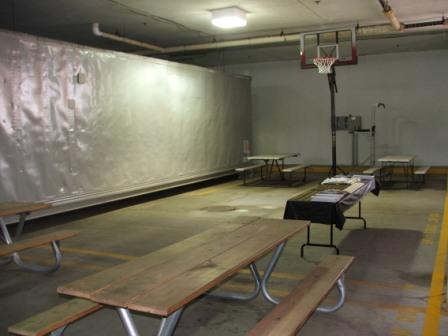 Prisoners are brought to these small rooms where they “visit” with family members seated on the opposite side of the window. The family’s room is a mirror image of the inmate’s visiting room. The view below is from the inmate’s side of the glass. 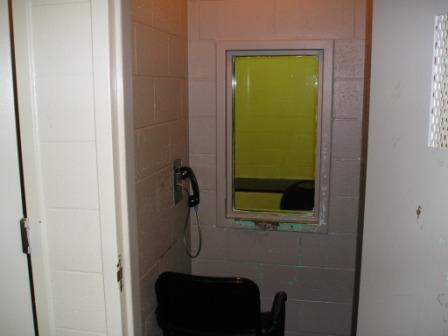 By the way, prison and jail are not synonymous. They’re entirely different animals. But that’s a topic for another blog.

*Not all jails and prisons operate in the same manner. Nor are they all the same in appearance.