I desperately need your help. My sweet daughter, Ellen, has cancer.

Most of you know me and those of you who do understand that I am a private person. I’m not one to discuss my personal life. Nor am I someone who typically asks others for help. That’s just not me.

So for me to come to you today and during these past few weeks is truly unusual, and if there could be any other means, believe me, I’d opt for the alternative.

Unfortunately, the alternatives are no longer.

Ellen had been experiencing serious health issues and doctors simply blew them off as other things until one day a few weeks ago she went to yet another doctor to see if he could help. Well, within minutes into his exam he rushed her into emergency surgery to deal with a tumor the size of a golf ball. The tumor was causing a great deal of hemorrhaging and intense pain due to its location, size, and the fact that it had by this time grown into surrounding muscle. This doctor removed as much of the tumor as he could, at the time. Any other doctor who’d have bothered to take a look should’ve seen the same.

Two weeks later, Ellen had a second surgery. This operation was performed by a well-respected oncologist. Even I like her, and that says a lot because I’m picky about doctors who perform life-saving procedures. Not to mention that Denene has been involved in the medical field for quite a while, managing hospital labs, directed a med tech program at colleges and universities, and she’s served as senior director of biotech companies where she and her teams developed drugs that received FDA approval and are now on the market. She knows her field.

Currently, Denene is a professor at a medical university and has access to a plethora of top specialists who kindly examine the reports we receive regarding Ellen (and my mother-in-law who is now receiving chemo after major cancer surgery a few weeks ago). So yes, we have all the confidence possible in the two doctors/surgeons.

Ellen’s second surgery was a success in that the tumor is now gone. However, the surgeon elected to biopsy a few lymph nodes from other locations, as a precaution. Unfortunately, there was a positive result near the aorta. More cancer, and the fight just became an all-out battle.

Without going into a lot of personal details, let me simply say this—Ellen, who most of you know indirectly through the Writers’ Police Academy (she’s the poor soul tasked each year with contacting each of you for raffle and auction donations), and, you know her through Tyler, her son/our grandson, the champion wrestler—needs financial assistance. Her family, like others facing similar situations, simply cannot make ends meet while facing huge medical bills that are piling up daily. Then there’s travel to and from the treatments (1.5 hours each way).

Ellen’s husband, John, must take time off from work (he works night shift, 12 hours per night) to drive her to appointments and treatments, or to help her when needed at home. His employer does not pay him when he’s not at work. Sick leave and vacation time are long gone. Chemo (aggressive) begins tomorrow followed by daily radiation for four-six weeks, and then another round of chemo. Doctors will then have a look to see if what they’re doing is working/helping.

Their son, Tyler, is a 15-year-old champion wrestler whose hope is to make it to the Olympics and to wrestle at a fantastic college. He already has colleges looking at him and an Olympic coach has offered to take him under his wing to train him. It’s no secret that it takes money to support school kids/teens, and it takes even more when your dream is help your kids achieve theirs.

Ellen’s first and very brief and extremely tiring outing after surgery was to see Tyler wrestle his first high school meet of the season. So Denene and I took her. 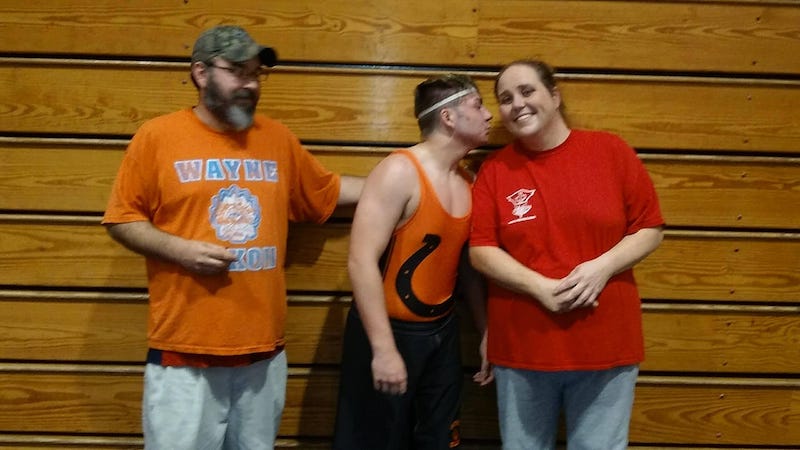 Tyler won his match in spite of wrestling in a heavier weight class than his own, and against a much larger and older opponent. The same was true for the rest of his matches … all taller, heavier, and older competitors.

Denene and I had to leave to catch our flight back home, but John took Ellen back to the tournament later in the day to see the last match.

Tyler was determined to win the entire tournament for his mom, and he did, besting every single opponent throughout the day. I saw some of the young men he faced and they were huge.

When he pinned the last one, a top state contender, Tyler leapt to his feet and yelled for his mom at the top of his lungs and then after spotting her, ran to Ellen to plant a kiss on her cheek (above photo). That young man is amazing!

Right now, we have a few dreams and goals:

2. To ease Ellen’s mind (and the minds of her family members) regarding mounting medical bills and expenses.

3. Repair their vehicle which may make it to doctors’ appointments, or it may not. The latter has already occurred once. They need proper transportation.

4. Make certain Ellen has prescribed medicine (she is also diabetic).

5. Heat, water, electricity, clothing, medical supplies, food, school supplies and expenses, tournament fees (Tyler still must continue as a student and athlete, etc.). It’s important for him to have some sort of normalcy in his life.

Ellen’s hair is gone, sadly, but it’s a bump in the road. The majority of the cost of her first wig (she’ll need to wear one for at least one year) was donated by a foundation at the oncology center. The next will be at her expense.

Here she is last week after receiving the first wig.

Remember, Ellen’s husband must take off work to drive her to appointments. They have no family or friends in the area having recently moved there. Actually, other than us and a step-sister, we’re her total support system outside the hospital. And, we’re in California and her step-sister lives three-hours away. Therefore, we’ve been making the trip as often as possible coming home for a few days at a time. But Denene has a job, too, and she must be there. Fortunately, her schedule is a bit flexible. However, flying coast-to-coast every two or three weeks, hotels, rental cars, etc., are taking a heavy toll on us as well.

I could go on, but you get the picture and it is grim. Denene and I do what we can and one of those things, in addition to financial support, is to turn to you for help. Several of you have already donated and those dollars are very much appreciated. You just don’t know how much it means to me.

As I said in an earlier post, all her life, I’ve tried my best to handle the woes, small and large, that came Ellen’s way. From bee stings, scrapes and scratches, to sports injuries and dumb luck and more. I’ve tried to be there. Fix things. That’s my job.

Anyway, I could ramble on and on and beg and beg, but it boils down to this, if you can and are able, please, please, please help me help my little girl. I simply cannot bear to see her hurt, physically and/or emotionally. I’m actually wiping away tears as I type this so please excuse typos and other errors. This is tough for me.

She’s my little girl. Always will be. 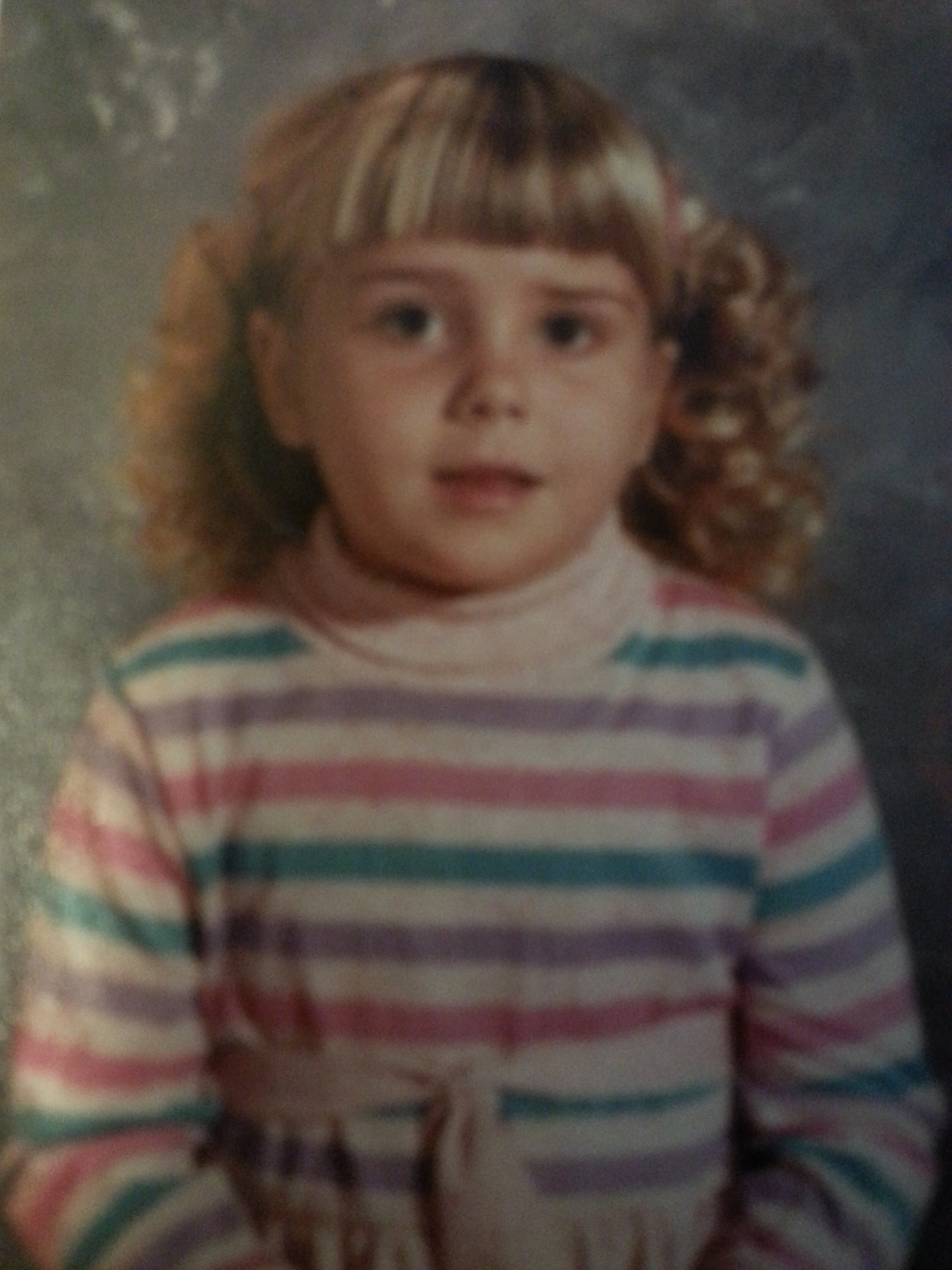 Thank you for anything you can do. No amount is too small or too large. 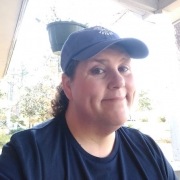 From Ellen, Our Daughter 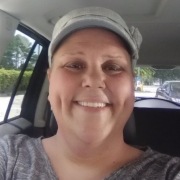