June 18, 2010 – Sgt. Doug Weddleton was working a traffic detail at a construction site when a car illegally passed his parked patrol car. He stopped the vehicle and while handling the suspected drunk driver, a second intoxicated driver plowed into the first stopped vehicle, pushing it into Sgt. Weddleton.

He was transported to an area hospital where he succumbed to his injuries. Sgt. Weddleton leaves behind his wife and four sons.

June 19, 2010 – While leaving her assignment of guarding a prisoner at the Virginia Commonwealth University Medical Center on June 11, 2010, Deputy Caroline Green crashed her unmarked police car into the side of one of the center’s buildings. She succumbed to her injuries one week later after undergoing several operations.

June 19, 2010 – Deputy Sheriff Dean Ridings was killed in a boating accident while on marine patrol. A large wake overturned the police boat throwing Deputy Ridings overboard. He was knocked unconscious after hitting his head on the boat during the accident. Deputy Ridings was transported to the hospital where he succumbed to his injuries. He leaves behind his wife, two sons, and three grandchildren. Both of Deputy Ridings’ sons also serve as deputies with the Spotsylvania Sheriff’s Office.

June 20, 2010 – Officer Craig Shaw was shot and killed on Father’s Day while responding to a shots-fired call at an apartment complex. A man had been murdered at the housing unit and when officers approached the shooting suspect he turned and fired, killing Officer Shaw. The suspect, the son of newly appointed Dallas Police Chief David Brown, was killed by officers during the shootout. 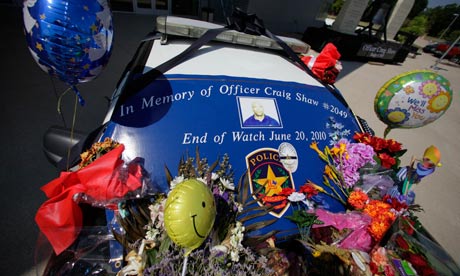 Officer Shaw is survived by his wife and two children.

June 22, 2010 – Officer Phillip Ortiz died as a result of injuries he received in a traffic accident on June 9, 2010. Officer Ortiz had stopped a vehicle and was issuing a traffic summons when a car attempted to pass on the shoulder at a high rate of speed. The passing vehicle struck the officer and the stopped vehicle. Officer Ortiz was pinned in the wreckage and had to be extricated by emergency crews.

Officer Ortiz is survived by his wife, parents, and sisters.

June 22, 2010 – Deputy Sheriff Melissa Powers, a mother of two, died in a single car traffic accident while searching for another deputy who was not responding to his radio. Deputy Powers was driving on a rain-slick highway with lights and siren activated when she lost control of her patrol car and crashed into a tractor trailer. Rescue workers extricated her from the car and transported her to the hospital where she succumbed to her injuries. Deputy Powers leaves behind a son and daughter, her parents, and her husband who is a police detective.

June 22, 2010 – Deputy Sheriff Richard Daniels was killed at approximately 1:30 a.m. when a large oak tree fell across the roadway, ripping off the top of his patrol car.

Deputy Daniels leaves behind his wife and his infant daughter.

Followon TwitterSubscribeto RSS Feed
Why I Write This Blog