Officer Richard Francis was shot and killed on July 2, 2008 while he was attempting to quell a domestic disturbance. During the altercation a woman managed to gain control of the officer’s service weapon, shooting one time. Officer Francis was a 27 year veteran. He leaves behind a wife and two stepdaughters.

On June 29, 2008, Officer Gary Gryder was struck and killed by a drunk driver while directing traffic at a construction site. Another officer was also seriously injured in the accident. The driver never attempted to apply brakes. Officer Gryder was a 23 year veteran and leaves behind a wife and son.

Corporal Richard Findley was struck and killed on June 27, 2008 by the driver of a stolen vehicle as he attempted to arrest the criminals inside the car. Corporal Findley was a ten year veteran of his department. He leaves behind a wife and two daughters.

Today, as we mourn the police officers who made the ultimate sacrifice, we also celebrate the birth of our country, and our freedom.

Please remember our service men and women. Be safe, everyone. 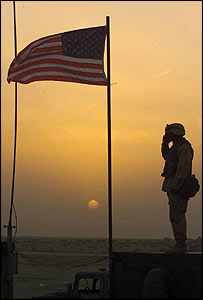