June 24, 2011 – Trooper Adam Bowen was killed in an automobile crash while responding to assist a Virginia State Police narcotics agent. Trooper Bowen’s car collided with an oncoming vehicle and then spun into a utility pole. 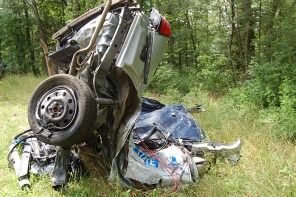 The trooper’s patrol car split in half upon impact with the pole, sending the front section of the car into a parking lot where it came to rest after striking three other vehicles. Trooper Bowen died at the scene of the crash. He is survived by his parents and fiancée.

June 26, 2011 – Sergeant Darrell Curley was shot and killed when he responded to a domestic disturbance between two brothers. While Sgt. Curley was attempting to arrest the two men the father of the brothers opened fire, wounding Sgt. Curley and a second officer. Sgt Curley was able to return fire at the scene, but succumbed to his wounds. He is survived by his wife, three children, parents, and siblings.

June 26, 2011 – Officer Russell George was killed in an automobile accident while responding to a call for assistance from another officer. His patrol car hit an abandoned bicycle lying in the roadway and spun out of control, striking several trees. The car then caught fire and became engulfed in flames. Officer George died at the scene. He is survived by his wife, daughter, two step-daughters, mother, and four siblings.

June 26, 2011 – Deputy Charles VanMeter was killed in an automobile accident when an oncoming vehicle turned in front of the deputy’s approaching patrol car. He is survived by his parents, siblings, and grandparents.

A Day On the Farm
Scroll to top