May 12, 2017 – Chief of Police Eric DiSario was shot and killed while responding to a call regarding a man with a gun at a local nursing home. The suspect also shot and killed two people inside the facility.

Chief DiSario is survived by his expectant wife and six children.

May 16, 2017 – Deputy Mason Moore was shot and killed during a vehicle pursuit. While attempting to escape capture, occupants of the fleeing car fired multiple rounds at Deputy Mason’s patrol vehicle, causing it to veer off the roadway and crash. The suspects then made a U-turn to pull beside the officer’s car where they fired at least twenty-four rounds into the vehicle, striking Deputy Moore in the head.

The father and son pair then fled but again engaged in shootouts with police that took place in other counties, with numerous law enforcement officers from various agencies involved. One of the shooters was eventually killed by police. The other was taken into custody and charged with multiple offenses, including murder and attempted murder.

The father and son, according to police investigators, were on a mission to kill a police officer.

May 24, 2017 – Agent Isaac Morales succumbed to injuries received four days earlier when he was stabbed in the eye during an unprovoked attack as he and others were walking to their cars.

May 13, 2017 – Deputy Jason Garner and Community Service Officer Raschel Johnson were killed in a vehicle crash while en route to a burglary call. The patrol vehicle left the roadway and became engulfed in flames after striking a parked car and a dumpster. Officer Rachel Johnson was on a ride-along at the time of the crash.

Deputy Garner is survived by his wife and four children. 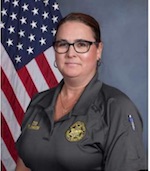 Community Service Officer Raschel Johnson is survived by her husband, three children, her parents, and a brother.

Suicide in the Old Shed: The Day Frank Tried to End it All
Scroll to top