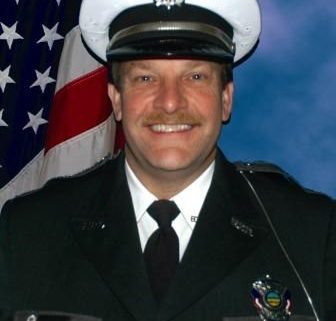 I’ve been there. I know what they go through, and there aren’t enough words to make you understand the life, the joy, the compassion, and the pain that it takes to put on a uniform and head out into the night wondering if you’ll come home at the end of your shift.

But, even in an occupation where everyone is a champion, there’s always one or two who stand out in the crowd. You’ve already met two of those officers who dedicated their lives to helping others, Sgt. John Howsden and Lt. Dave Swords.  Today, I’d like you to meet Public Affairs Officer Dave Crawford of the Hamilton Ohio Police Department. Dave is a wonderful friend who has gone way out of his way to help writers get their facts straight, me included.

In 1982, Dave Crawford attended the Butler County Sheriff’s Office Police Academy. After graduation he worked as a Special Deputy for the sheriff’s office for a year as a Road Patrol deputy, and in the Jail Division. A year later he was offered a job with the Miami University Police Department, but turned down the post, deciding instead, to accept a position with the Hamilton Ohio Police Department.

Officer Crawford attended the Ohio State Highway Patrol Academy, and was already a certified police officer when he was hired by the Hamilton Police Department. He was sworn in as a police officer with HPD on March 17, 1984.

Dave has worked in several areas within the Hamilton Police Department, including the Patrol Division, Traffic Division, as a Court Officer, Desk Officer and, as a member of the Honor Guard Unit. His current position, Public Information Officer/Crime Prevention Officer, is in the Public Affairs Section of the police department, which entails a multitude of assignments.

Training is on-going and necessary for law enforcement personnel, and Officer Crawford has gone above and beyond what’s expected of the average police officer. He continues to attend a variety of schools and conferences such as, training in traffic investigation, jail security,  and basic crime prevention, and advanced crime prevention through environmental design. He also passed an exam that certified him as a crime prevention specialist, a certification he still maintains.

Officer Crawford serves as Project Manager of the Carruthers Police Plaza, in charge of phase two of an improvement project consisting of new landscaping, security lighting, awnings at all entranceways, and a search of Hamilton Police Department’s history that resulted a wonderful display of historical photographs and portraits throughout the department.

A word from Officer Dave Crawford:

I would like to pay homage to Lee Lofland for permitting me to assist him with the technical advice and photography for his book Police Procedure and Investigation, A Guide For Writers, and for his upcoming children’s book Everything Kids: I Want To Be A Police Officer that he’s co-writing with Becky Levine.

In addition, I would like to reflect the authority of all of my endeavors by Chief Neil R. Ferdelman and Captain Steve Poulemanos and Joe Murray who have extended their trust and knowledge for the projects and assignments they’ve assigned to me. Without their support, I would not have had the opportunity to oversee such great projects and accomplishments.

I continue to receive updated training for my field of crime prevention/media schools. I thrive on the various projects assigned to me. I enjoyed assisting you with your book on police procedure an the forthcoming book for kids. I was in a film (B Rated), I made world news for a news story in Readers Digest, and many endless improvements to the department, etc. I was also awarded employee of the month, MADD’s Top Cop Award, along with many other certificates of dedication and appreciation. I am in the process of becoming a certified Crime Prevention Specialist in Environmental Design.

I am married for 26 years to my wife Julie, and we have two children, Sarah and Tom and our four dogs.

My biggest hobby is collecting police lapel pins throughout the world and police related memorabilia.

* Note from The Graveyard Shift: I won’t be around until later this afternoon because I’m on my way to speak at the Scene of the Crime Conference in Wichita, Kansas. The conference begins tonight with a murder for the attendees to solve. Yep, there’s a body waiting somewhere in the hotel for the anxious conference-goers. The person who solves the crime wins a cool prize. This is a fun conference that’s a must for anyone interested in learning about real-life police procedure and CSI. The faculty is made up of nearly all law enforcement experts. This year’s keynote speaker is Katherine Ramsland.

While I’m away, please feel free to post your comments for Officer Crawford. He has a busy day planned, but maybe he’ll find a moment or two to stop in.

By the way, I have some pretty exciting guest bloggers lined up for rest of the month – literary agents, a publisher, police experts, writing professionals, etc. Ben LeRoy, publisher with Bleak House Books, is joining us on Monday.

Weekend Road Trip – Garden of the Gods
Scroll to top